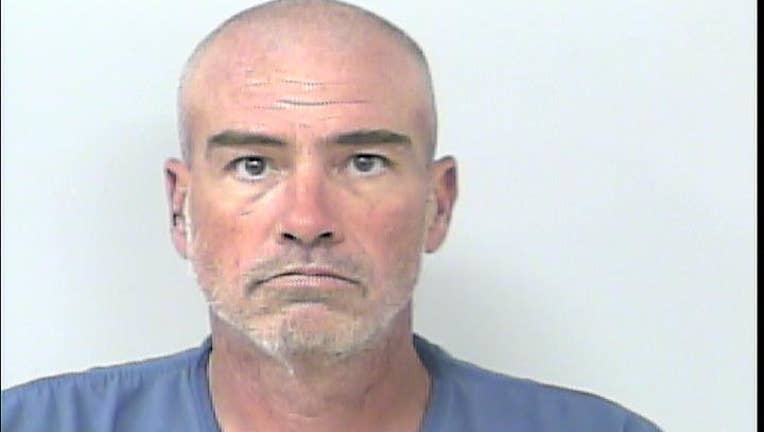 FORT LAUDERDALE, Fla. - A man broke into a Florida nursing home and suffocated a 95-year-old patient whose girlfriend he'd had a relationship with, police said.

William Hawkins, 47, is charged with first-degree murder for the Jan. 5 slaying of Robert Morell, who was suffocated with a pillow as he slept by an intruder at the Tiffany Hall Nursing & Rehab Center in Port St. Lucie. He was being held Tuesday at the St. Lucie County Jail without bond.

According to a redacted police arrest report, Hawkins quickly became the prime suspect because he was on Morell's visitor list and matched the description of the man employees saw fleeing the room after being spotted on top of Morell shortly after midnight. One employee then picked Hawkins out of a photo lineup.

Detectives learned that Morell's 57-year-old girlfriend of 15 years had called the nursing home hours before the slaying, telling employees to not let Hawkins into the home because she feared he would hurt Morell.

Morell had been placed into the home in September because of eating problems that required he be fed through a tube. The girlfriend told detectives that she and Morell had an open relationship and that she dated Hawkins after Morell went into the home, but that had ended.

She said that Hawkins broke into her bedroom through a window Jan. 4, about 15 hours before the slaying, and woke her. She told detectives that Hawkins noticed needles and a vial of insulin that she uses to treat her cat and suggested she kill Morell by injecting the insulin into his feeding tube. She refused and said Hawkins then stole her car, which is when she called the nursing home to warn them.

Hawkins was found the day after the slaying hiding in a shed in the nearby city of Fort Pierce and was arrested on charges including burglary and auto theft while investigators built their homicide case against him.

According to the local news website TCPalm, an unredacted version of the report shows Hawkins confessed at the jail to his sister, who wore a recording device for police. He then confessed to detectives, telling them that he had planned to murder Morell for some time and by slaying the man, he had “accomplished my life goal,” the report said.

Hawkins was charged with murder last week, although no announcement was made. His public defender did not immediately return a call seeking comment.