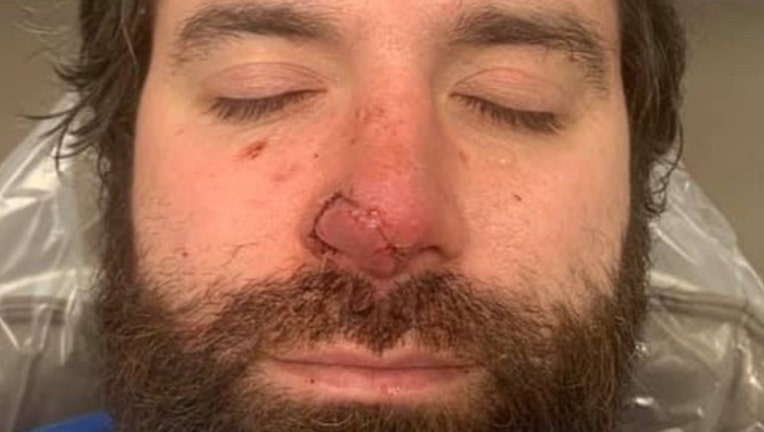 A Louisiana man had a chunk of his nose bitten off by a man he bought a drink for, authorities said.

Bryan Thayer, 34, told nola.com that he finished a shift at the Metairie bar he owns and stopped by another bar just before 5 a.m. on May 8.

He and a friend bought a drink for a man later identified as Andrew Nierman, according to the Jefferson Parish Sheriff’s Office.

The drink spilled on Nierman, but Thayer told the news outlet that he and his friend bought him another. He said the 32-year-old Neirman walked away but came back a few moments later and threatened Thayer.

"He grabbed my head and took a chunk out of my nose," Thayer said.

Authorities said Nierman ran from the bar and got into a vehicle. Thayer, bleeding profusely, got the attention of a nearby deputy.

The deputy stopped Nierman, who said, "I was just accosted by him, so I bit him in the face," according to an incident report.

Nierman was arrested on charges of second-degree battery and resisting arrest by refusing to provide identification. He was released from Jefferson Parish Correctional Center on a $25,500 bond the next day. Nierman declined to comment to The Times-Picayune/The New Orleans Advocate.

Thayer said he had surgery to reattach the portion of his nose that was severed. Doctors reopened and stitched the wound Monday. He said he expects the injury will prevent him from working at his bar.

A GoFundMe has raised more than $5,000 for Thayer.