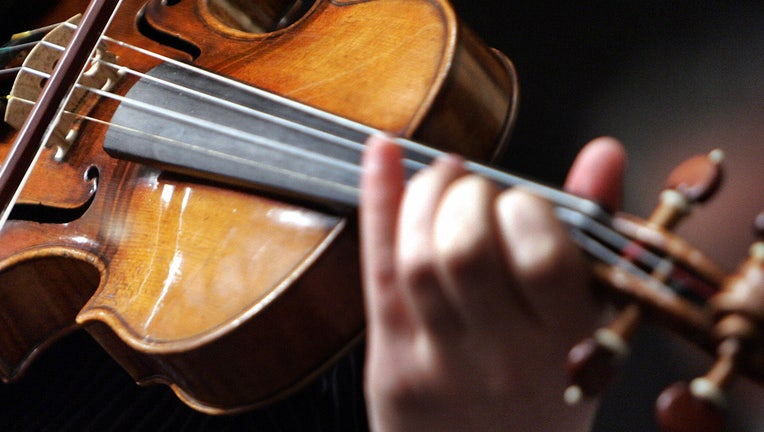 A File photo of a 1729 Stradivari.(Photo credit DON EMMERT/AFP via Getty Images)

ASUNCION, Paraguay - Paraguayan police said Wednesday they have detained two Germans and a Chilean suspected of killing a German man and his daughter while trying to get documents proving the authenticity of valuable violins.

Bernard Raymond von Bredow, a museum owner and instrument maker, was slain along with his 14-year-old daughter Lydia last month at their home in Aregua, east of the Paraguayan capital last month, and police said von Bredow's body showed signs of torture.

Police Commissioner Hugo Grance said four violins believed to have been made by revered Italian luthier Antonio Stradivari were found in the possession of Volker Grannass, a 58-year-old German who lived near the von Bredow residence.

Grance said that von Bredow apparently had left the violins with Grannas during a trip to Germany, and was told when he returned that they had been destroyed in a fire.

"Our principal hypothesis is that the motive for the double crime was to find the international certification of authenticity of the violins so they could be sold," he said.

Prosecutor Lorena Ledesma, one of the agents assigned to the case, said officials were seeking further evidence because they suspect more people were involved.

Violins crafted by Stradivari in the 17th and 18th centuries can sell for millions of dollars.

Von Bredow gained notice as a teenager when he discovered the complete skeleton of a mammoth near his hometown of Siegsdorf in Bavaria. He later founded a museum on mammoths and also pursued work in biology, geology and other fields, according to the biography on his museum's website.

Neighbors in Aregua said von Bredow had settled in the town two years ago and dedicated himself to making violins.

Grance said last week that von Bredow house "was found in complete disarray and blood stains indicated that the Germans were probably killed elsewhere on the property. The man had traces of having been tortured," Grance added.

The officer said the evidence at the scene indicates "that two or more individuals sought something" inside the house.

Musicians in the subway

New York City has many places to showcase musical talent. One of the most endearing is right beneath your feet: the subway.