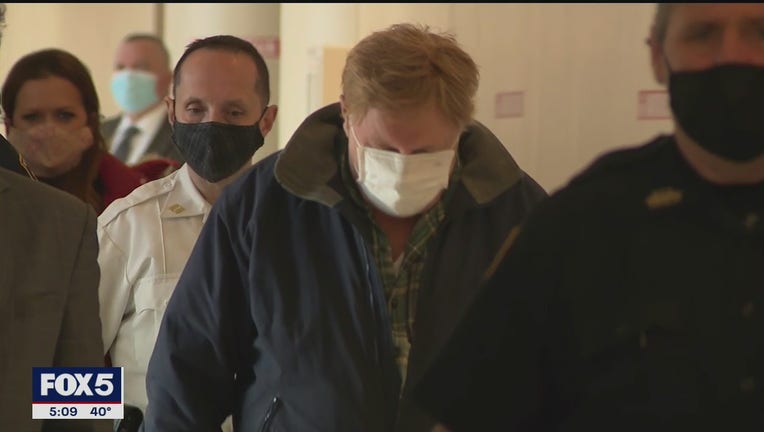 NEW YORK - Eileen Tyznar says she was the recipient of hate-filled letters with descriptive threats all because she hung pride flags and held parades for the LGBTQ+ community.

"He’s going home and I’m going straight up for an order of protection," Tyznar said. "We were victimized for three years."

She says she was victimized by Robert Fehring who surrendered to FBI agents and Suffolk County police this week. The 74-year-old is charged with making threats through the U.S. mail along with grand larceny and criminal mischief as a hate crime for allegedly stealing pride flags.

The married father is accused of mailing at least 60 letters postmarked over the last 8 years threatening to assault, shoot and bomb LGBTQ+ supporters.

Pride advocate David Kilmnick has been a target for years.

"He knows where I live, he’s going to stab me in the back or shoot a bullet through my face, watch out if you start your car - it may blow up," said Kilmnick, president of the LGBT Network.

During a search of Fehring’s Bayport home, investigators say they recovered items including a doctored newspaper cover spewing anti-gay rhetoric, two loaded shotguns and hundreds of rounds of ammo.

In one of the letters, authorities say that Fehring threatened that there would "be radio-controlled devices placed at numerous strategic places" at this year’s New York City Pride March with "firepower" that would "make the Pulse Nightclub shooting look like a cakewalk."

"Someone like this shouldn’t have been allowed to sit around for eight years and terrorize the LGBT community," Kilmnick said.

Fehring, who is a retired Bellport High School teacher, pleaded not guilty and is limited to home confinement.

"Mr. Fehring respects the process and asks he allow it to play itself out to the end in court," said attorney Glenn Obedin.

If convicted on the top federal charge, Fehring faces up to 5 years in prison.

The FBI asks anyone who may have received similar threats to report it by calling 800-CALLFBI.