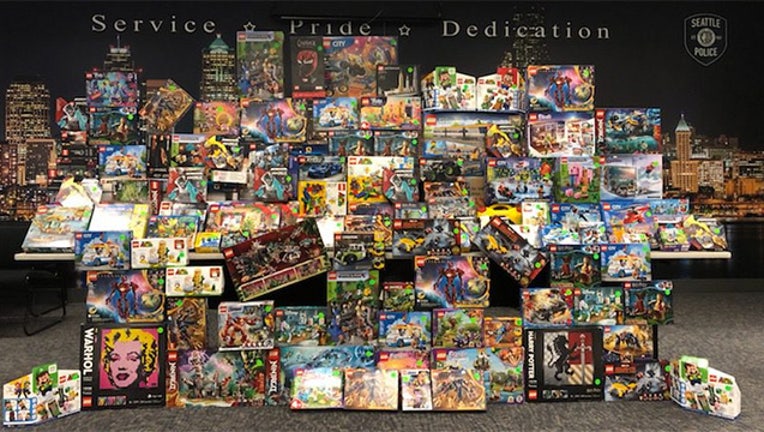 NEW YORK - There is a huge market for Legos, and a collector who runs a website dedicated to the toys says that is why there are organized thefts of the famous toys.

In the latest incident, police in Seattle say they have arrested a store owner and recovered thousands of dollars worth of stolen Lego sets.

The police say an investigation began in late July when a store owner contacted police regarding a repeat shoplifter. The business’ loss prevention representative told police a suspect had repeatedly stolen Lego sets, frequently making off with Star Wars, and specifically "The Mandalorian" sets.

The loss prevention employee estimated the suspect stole more than $10,000 worth of products between July and September. Employees helped police identify the shoplifter and detectives began an investigation.

Jessica "Ragzy" Ewud quit her 9-5 gig to pursue her passion as an artist using Lego bricks as her medium.

In early September, an employee from the targeted business spotted a store in the 1500 block of Pike Place, which seemed to be stocked with many of the same Lego sets and electronics which had been shoplifted from his store.

The loss prevention supervisor entered the store and found many of the items still had RFID tags on them, indicating they had been previously stolen from his business. He notified police, and a detective went to the store to investigate. While the detective was at the store, they say that the shoplifter arrived and sold multiple items to the shop’s owner.

Through additional undercover work, police determined the owner was knowingly trafficking stolen goods, and officers served a warrant at the store.

Police seized thousands of dollars worth of stolen merchandise, including 171 Lego sets. Using RFID tags and unique identification numbers, the loss prevention representative identified 34 of the products as originating in his store, valued at more than $2,000.

Officers arrested the 67-year-old store owner for trafficking in stolen property and booked him into King County Jail. It was unclear if he had a lawyer.

This is not an isolated case.  Police across the country have been investigating Lego thefts.

Earlier in the year, a man was arrested in Oregon and charged with stealing about $7,500 worth of the toy sets.

According to NPR, there is a lot of money in Legos, especially ones that come out in limited editions and soon become collectors' items.

And in France, police were investigating an international Lego crime ring.  LeParisien reported that the thieves were part of a gang that would stay in hotels near Paris, drive around in an Audi, and "raid" toy stores for valuable Lego sets to resell in Poland.

It's expected to be the largest Legoland theme park in the country.