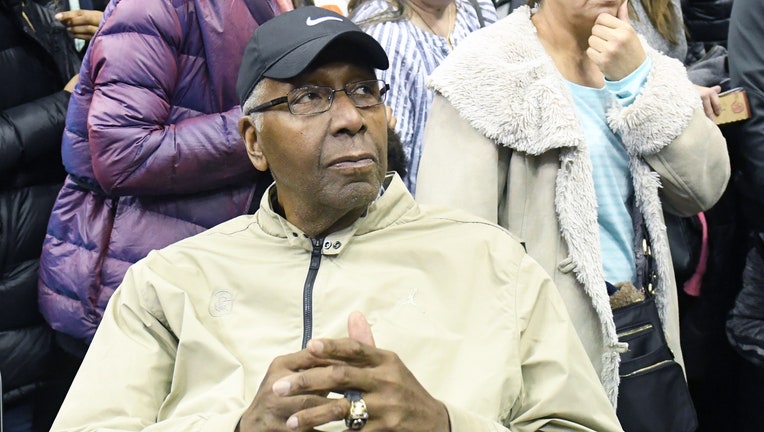 Former head coach John Thosmpson Jr. of the Georgetown Hoyas looks on after a college basketball game against the Seton Hall Pirates at the Capital One Arena on March 2, 2019 in Washington, DC. (Photo by Mitchell Layton/Getty Images)

NEW YORK - John Thompson, the legendary former head coach of the Georgetown University men's basketball team who captured the NCAA championship in 1984 has died, according to published reports.

Thompson played NBA basketball before beginning his hall-of-fame coaching career at Georgetown University in 1972. He transformed the school's basketball program, leading them to numerous NCAA tournament appearances throughout his nearly three decades with the team. In 1984, he became the first African-American head coach to win a NCAA championship.

His son, John Thompson III, known as "JT3," was Georgetown's head coach for 13 seasons, including a run to the Final Four in 2007.

In 1989, Thompson protested Proposition 48 by walking off the basketball court. Thompson believed that standardized testing was a form of racism against underprivileged youth. The prohibits scholarship athletes from playing as freshmen if they failed to qualify academically.

During his tenure, the Hoyas were known beyond basketball circles as they became a part of pop culture with hip-hop embracing the team's apparel including the popular Nike blue and grey 'Hoyas' high tops donned by fans and non-fans alike.