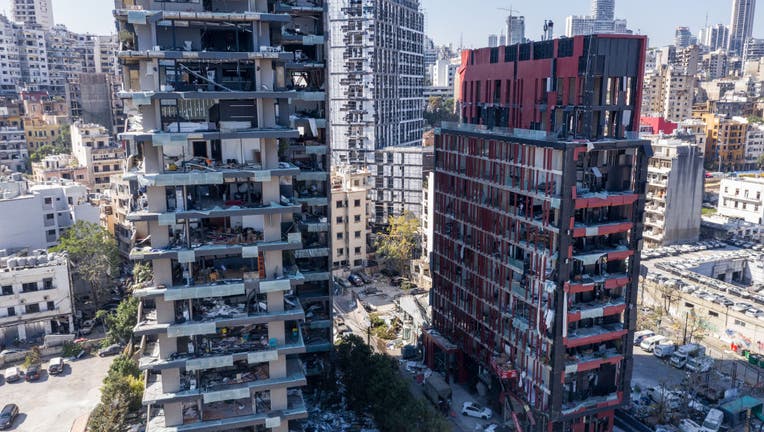 BEIRUT, LEBANON - AUGUST 07: An aerial view of high-rise buildings heavily damaged in Tuesday's blast as seen on August 7, 2020 in Beirut, Lebanon. By Friday, the official death toll from Tuesday's blast stood at 145, with thousands injured. Public a

BEIRUT, LEBANON - Lebanese President Michel Aoun knew about the huge stockpile of explosive material stored at Beirut's port nearly three weeks before it blew up, he said Friday, adding he had ordered action be taken about it at the time, although the top leader also said he had no authority over the facility.

“Do you know how many problems have been accumulating?” Aoun replied when a reporter pressed whether he should have followed up on his order.

Aoun’s comments were the most senior confirmation that Lebanon's top leaders and security officials were aware of the 2,750 tons of highly explosive ammonium nitrate that had been stored at the port for years.

The chemicals exploded Tuesday after apparently being set off by a fire, in a massive blast that killed nearly 150 people, wounded thousands and caused billions of dollars of damage across the city. Bodies were still being recovered from the rubble on Friday.

Investigators are probing the blast and have focused on personnel at the Port of Beirut —Lebanon's main port that is so well known for corruption its common nickname is Ali Baba’s Cave. But many Lebanese say it points to much greater rot that permeates the political system and extends to the country’s top leadership.

Aoun, who has been in his post since 2016, said previous governments had known about the danger of the stockpile since it was confiscated from a ship impounded in 2013.

“The material had been there for seven years, since 2013. It has been there, and they said it is dangerous and I am not responsible. I don’t know where it was placed. I don’t even know the level of danger,” Aoun told a news conference.

He said that when he was told of the stockpile June 20, he immediately ordered military and security officials “to do what is needed.”

“There are ranks that should know their duties, and they were all informed. ... When you refer a document and say, ‘Do what is needed,’ isn’t that an order?” he added.

He said the explosion may have been caused by negligence, but the investigation would also look at the possibility that it could have been caused by a bomb or other “external intervention.” He said he had asked France for satellite imagery from the time of the blast to see if they showed any planes or missiles.

So far, 16 port employees have been detained and others questioned. Official letters circulating online showed the head of the customs department had warned repeatedly over the years that the ammonium nitrate in the port was a danger and had asked judicial officials for a ruling on how to remove it.

Three days after the explosion, it is still not clear what exactly ignited the chemicals. It was the worst single explosion to hit Lebanon, a country whose history is filled with destruction — from a 1975-90 civil war, conflicts with Israel and periodic terrorist attacks.

For decades, Lebanon has been dominated by the same political elites — many of them former warlords and militia commanders from the civil war. The ruling factions use public institutions to accumulate wealth and distribute patronage to supporters. Three decades after the civil war ended, power outages are still frequent, trash often is uncollected and tap water is largely undrinkable.

Rescue teams found four more bodies in the wrecked port in the last 24 hours, including that of 23-year-old Joe Akiki, a worker missing since the blast. His body was found near a grain silo that was shredded along with other buildings in the port.

Outside the port area, women cried as they waited for news about missing relatives.

The explosion also devastated nearby residential neighborhoods, blowing out windows and wrecking facades for miles around.

Many of the streets that had been covered in debris have been cleaned up, mostly by thousands of volunteers who fanned out to the worst-hit neighborhoods, a sign of how Lebanese have had to rely on themselves rather than government action.

They swept broken glass and reopened roads, helped restaurants and shops clear debris, and salvaged their products. They separated rubble into piles of broken glass and mangled metal. Others volunteered to enter destroyed homes to look for medicine, valuables and essential documents for the residents who fled in panic.

“Our experience shows that we can find people alive until up to 72, 75 or 80 hours after an explosion or an earthquake, so for now we are still in time and we cling on to this hope,” said Col. Vincent Tissier, head of the French team.

An initial government assessment said 300,000 people — more than 12% of Beirut’s population — had to leave homes damaged or left uninhabitable by the explosion. Many of them have since returned, or are staying in second homes or with friends and relatives. Officials have estimated losses at $10 billion to $15 billion.

Damaged hospitals, under strain by the coronavirus, are struggling to deal with the injured.

Even before the blast, the country was mired in a severe economic crisis that was also widely blamed on the political class. Unemployment was soaring, and a collapse of the local currency wiped out many people’s savings, That will make rebuilding after the blast even more daunting.

Macron said France would lead international efforts to provide aid but would not give “blank checks to a system that no longer has the trust of its people.”

France, which has close ties to its former colony, has also sent a team of 22 investigators to help probe the cause of the blast. Based on information from Lebanon so far, France’s No. 2 forensic police official, Dominique Abbenanti, said Friday the explosion “appears to be an accident” but that it’s too early to say for sure.

In an interview with The Associated Press, he predicted “the death toll will grow.”

French investigators are involved at the request of Lebanon and also because one French citizen was killed and at least 40 were injured in the blast.

French police could later question witnesses or suspects, said Eric Berot, chief of a unit involved in the investigation. For now, the French team is dividing up zones to cover with their Lebanese counterparts and will use drones to study the area.

“The zone is enormous. It’s a titanic job,” Berot said. The investigation is complicated by the huge scale of the damage and “the Lebanese situation,” he said, referring to the political and economic crisis.

The U.N. human rights office called for an independent investigation, insisting “victims’ calls for accountability must be heard.”

Rupert Colville, a spokesman for the U.N. High Commissioner for Human Rights, cited the need for the international community to help Lebanon with both a quick response and sustained engagement.

He said Lebanon is facing the “triple tragedy of the socio-economic crisis, COVID-19 and the ammonium nitrate explosion.” Colville urged Lebanese leaders to “overcome political stalemates and address the grievances of the population.”