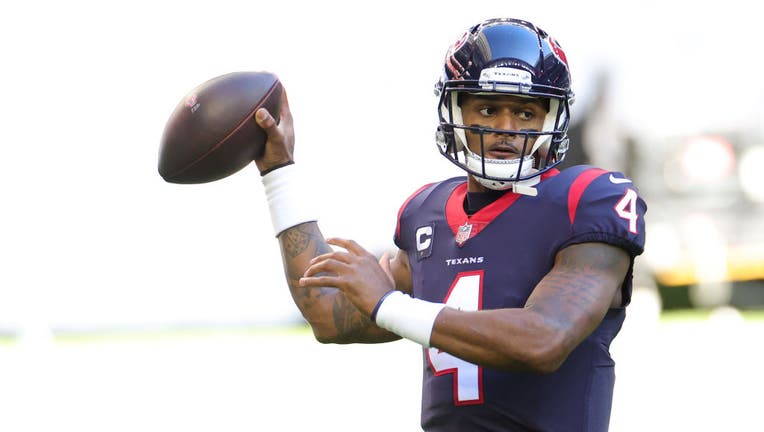 HOUSTON, TEXAS - JANUARY 03: Deshaun Watson #4 of the Houston Texans in action against the Tennessee Titans during a game at NRG Stadium on January 03, 2021 in Houston, Texas. (Photo by Carmen Mandato/Getty Images)

HOUSTON - Houston Texans Quarterback Deshaun Watson is facing allegations of sexual assault in a lawsuit filed on behalf of a female masseuse.

The suit was filed Tuesday by the Buzbee Law Firm.

Attorney Tony Buzbee tells FOX 26’s Isiah Carey that Watson was getting a massage from the woman when "Watson went too far."

"Too many times women have put up with behavior that we all know no one should put up with. Should we make excuses for the famous? Or those who hold special positions, or quarterbacks on a local professional football team? I don’t think so!," Buzbee wrote.

He went on to write that the case against Watson "isn’t about money—it’s about dignity and stopping behavior that should be stopped, NOW!"

Less than two hours later, Watson responded on Twitter saying he had not yet seen the complaint, but Buzbee made a "baseless six-figure settlement demand," which Watson rejected.

He says for him, it's about clearing his name.

Read below for his full statement:

"As a result of a social media post by a publicity-seeking plantiff's lawyer, I recently became aware of a lawsuit that has apparently been filed against me. I have not yet seen the complaint, but I know this: I have never treated any woman with anything other than the utmost respect. The plaintiff's lawyer claims that this isn't about money, but before filing suit he made a baseless six-figure settlement demand, which I quickly rejected. Unlike him, this isn't about money for me - it's about clearing my name, and I look forward to doing that."

The Houston Texans responded to the lawsuit and allegations on Wednesday morning with the following statement:"We became aware of a civil lawsuit involving Deshaun Watson through a social media post last night. This is the first time we heard of the matter, and we hope to learn more soon.We take accusations of this nature that involve anyone within the Houston Texans organization seriously. We will await further information before making any additional statements on this incident."