Nitrous oxide — or laughing gas — was commonly used during childbirth in the U.S. in the 1930s but with the emergence of epidurals, its popularity declined in the 1970s.

Doctors and patients around the world are likely familiar with using laughing gas during childbirth, but it’s largely gone under the radar in the United States — until now.

Nitrous oxide — or laughing gas — was commonly used during childbirth in the U.S. in the 1930s but with the emergence of epidurals, its popularity declined in the 1970s.

It has since experienced a renaissance with its approval by the U.S. Food and Drug Administration in 2012, but since it had fallen out of popularity for years, many obstetricians and anesthesiologists became unfamiliar with using it in hospitals, according to Contemporary OB/GYN.

Using laughing gas during childbirth to help manage and mitigate pain and anxiety is still an option for expectant parents in the U.S. but it’s not used nearly as much as in other countries.

One hospital in New York hopes to shed more light on the benefits of using laughing gas as opposed to epidurals or other IV narcotics to get through childbirth with no lingering side effects and a baby that is unaffected. 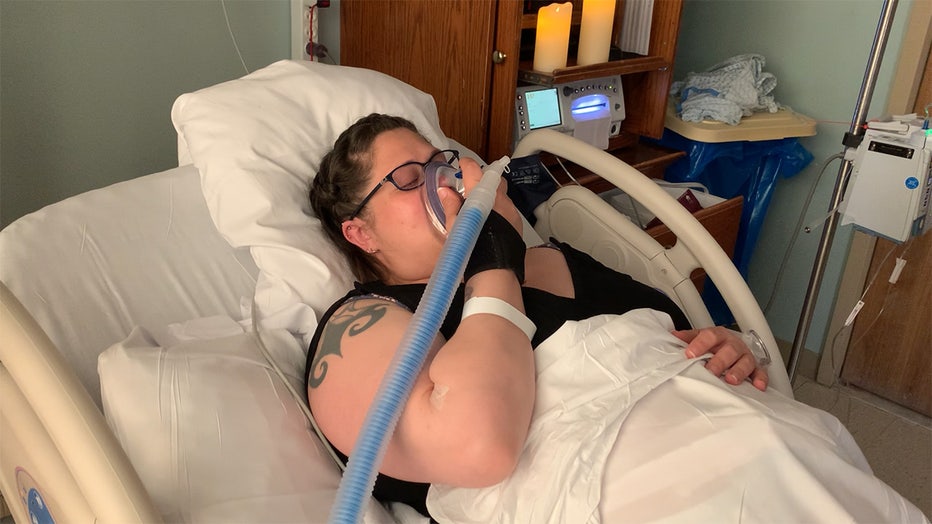 Common abroad, rare in the U.S.

Laughing gas has been used around the world to help manage pain and anxiety during childbirth for nearly 100 years. It is especially popular in countries such as the United Kingdom, Australia, New Zealand, Canada and many others, according to Contemporary OB/GYN, and is often the first line of defense when it comes to pain management.

Since it fell out of popularity in the 1970s, the U.S. has seen a resurgence of interest due to its easy use and minimal side effects. 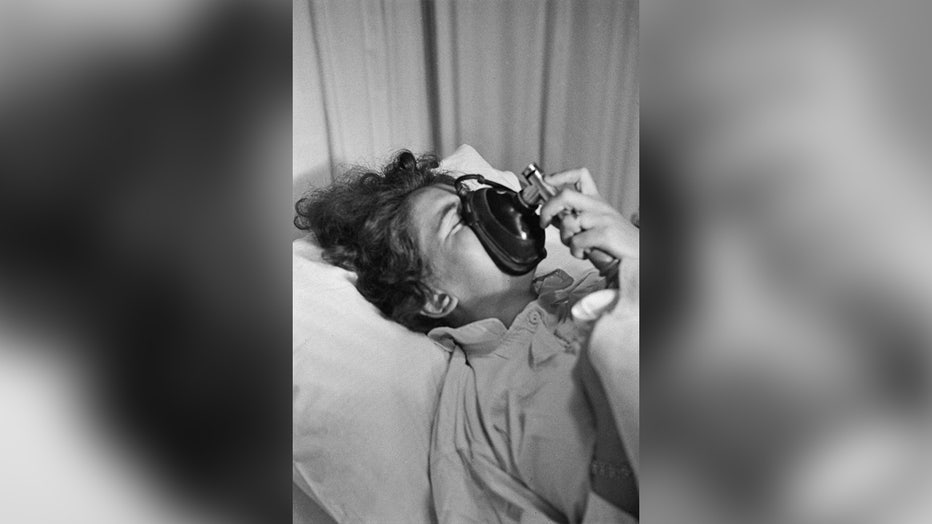 In 2011, just one year before the FDA approved a portable nitrous oxide delivery system in U.S. hospitals, there were only two places that offered laughing gas for pregnant people. As of 2019, nearly 1,000 hospitals and 300 birthing centers have laughing gas as an option, according to NPR, but it’s not often discussed as a valid option for pain and anxiety management during childbirth.

Laura and Robert of Long Island, New York, credit their knowledge of nitrous oxide to friends who lived outside of the U.S. "Almost everyone I know outside the U.S. has used it," Laura told FOX TV Stations.

The couple had their first child in Fort Worth, Texas, in 2016, and luckily for them, the hospital already had an option for nitrous oxide for pregnant patients.

"Europe would probably be laughing in that of itself because they’ve been using it for a very long time," said Jennifer Baierlein, director of women and children’s services at Huntington Hospital in Long Island. "I know for some people that have delivered outside of the United States that do work with us here now, they’re like, ‘Wow, you haven’t had this before?’ ‘Well no we haven’t had it before.’ And there have been some hospitals in New York that we did reach out to, to talk to, just to see how things went for them."

How is laughing gas used in childbirth?

Using laughing gas during childbirth is self-administered and operates out of a closed-circuit unit, according to Baierlein.

"They have to be able to hold the mask themselves. No one is holding the mask to them. If she needs it then, she can do it," Baierlein said.

Nitrous oxide is an odorless gas and usually takes peak effect at about 30-50 seconds after inhalation. The gas does not take away the pains of labor but it helps patients to not really care about it.

"So in labor use, we use less of a concentration, and just like you said, it’s not going to completely take away anyone’s pain. It really is more of a modality to help birthing people feel less anxious, kind of cope a little better while they are in labor. There has been patients that use it that is their form of pain management so we optimally want to manage pain. There’s some cases in which you can’t take away all pain, so it’s kind of nice to have this as a tool in the toolbox for people who, for some reason, may not want an epidural or for those that may not want an epidural right away for their pain management, so this is something that can be used to help as a bridge to get them some time to think about what they may want," Baierlein said. 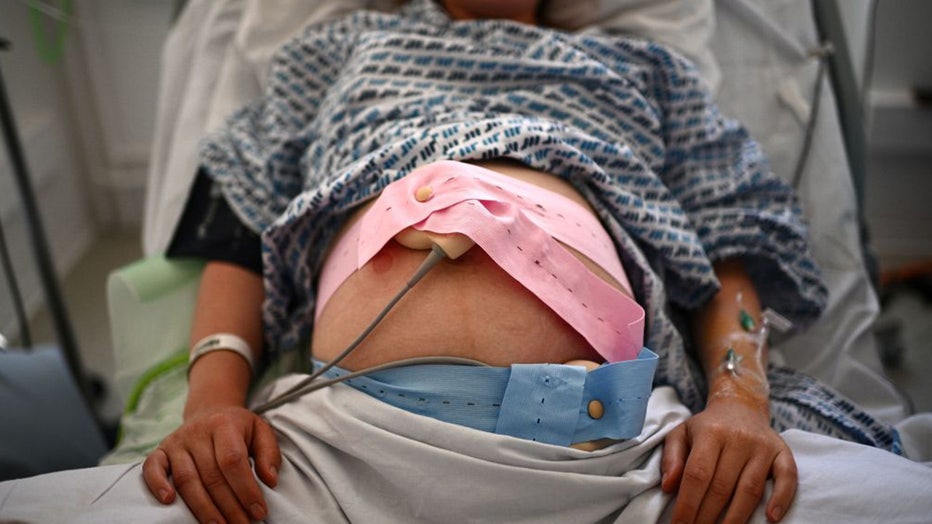 FILE - A pregnant woman lies on her bed with monitoring devices placed on her belly as she gets ready before delivering her child at the maternity ward of a hospital. (CHRISTOPHE ARCHAMBAULT/AFP via Getty Images)

During both of her pregnancies, Laura said using the laughing gas helped her to stay present but allowed her body to relax enough to help move along her labor smoothly.

"It lets your body relax more and faster between contractions so that I was better able to manage the subsequent contraction," Laura said.

Who should and shouldn’t use nitrous oxide

Side effects when using laughing gas are not very common and usually, a patient’s physician will go through a checklist of red flags before allowing its use.

If a patient has any of the following, it’s probably best to stay away from using laughing gas during childbirth:

Some side effects could include:

But the benefit of using nitrous oxide is it leaves your systems in minutes so if it’s not the right fit, patients can move on to a stronger method of pain management or use none at all. It’s all up to them.

And unlike an epidural or IV narcotics, laughing gas does not reach the baby and so far has no health impacts. Once the pregnant person takes a breath and decides to stop, it’s out of their system in no time.

No harm in trying it 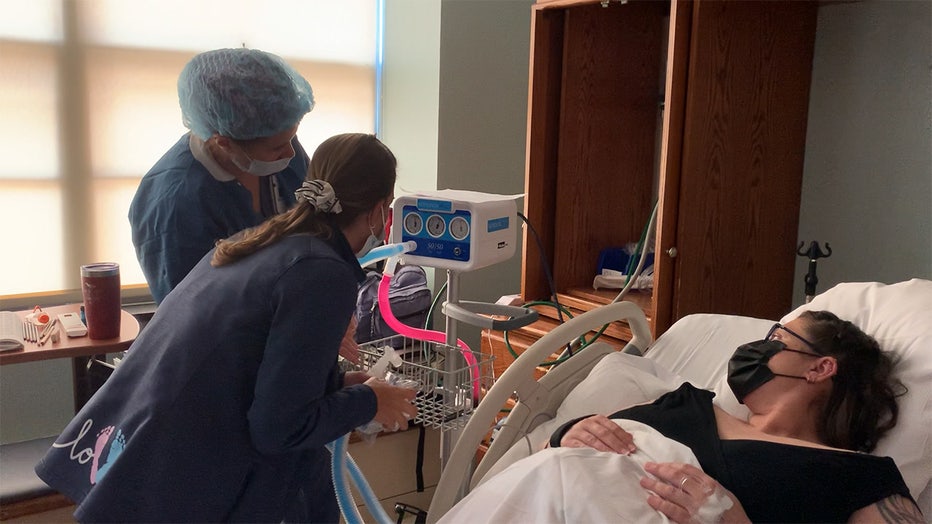 Laura wanted to share her own experience with nitrous oxide to hopefully educate expectant parents about their options.

"I like being aware, I like being able to get up and move around, and so compared to the other options that are available at the hospitals I was at with the IV narcotics and the epidural anesthesia, the epidural limits how much movement you can have. It also numbs everything so you can’t get up and walk around. You also have a urinary catheter, there’s a collection of unique risks to that situation and with the IV narcotics it affects your cognitive function, so I mean you’re high. It also passes to the fetus and that’s one of the reasons they have to stop it in advance of delivery which to me sort of defeated the purpose," Laura said.

Laura gave birth to her daughter at Northwell Health’s Huntington Hospital in New York and highlighted the midwifery group she worked with, commending their more holistic approaches to childbirth. She was educated about what would work best for her by a plethora of experts.

"In my case, it’s hard for me to disengage from everything else that’s going on and focus, especially in that type of environment where there are half a dozen people, there’s monitors, there’s all sorts of things going on. So, the difference between labor with and without the nitrous is, for me the nitrous helped me really stay in my groove and not be taken off course by other things that were happening," Laura continued.

While the nitrous helped Laura focus on her breathing and her labor, she was fully able to have conversations and was aware of everything going on around her.

"With my son’s delivery, he had actually gotten a little bit off course and was stuck in my pelvic bone. And if I had had an epidural, I would not have known that. So, because of the nitrous, I was able to communicate something felt off," she said. "Had I not been able to feel what was going on, he would have ended up in distress and that would have ended up as a C-section. So having that body awareness and the ability to communicate because I wasn’t on something that affected my cognition, I was able to be aware and communicate that effectively."

Laura emphasized that everyone’s experience with labor and how they handle pain is different. She in no way poo-poos people’s desire to use epidurals or IV narcotics but she wanted to let people know there is a middle ground for some expectant parents who are nervous about taking drugs to manage their pain.

Both Laura and her husband, Robert, would encourage any expectant parents to discuss using nitrous oxide with their providers if the goal is to have a low-intervention labor while still giving birth at a hospital.

"So, for somebody that has unmedicated, low-intervention-type labor, having a facility with that option available gives you an intermediary step that preserves as much of that experience as is reasonable. So for some people, if that’s really what their goal with labor is, that may be the difference between having that goal or having to move on to something else," Laura said.

"If it’s available and if things feel like you need something to help in any way, it doesn’t hurt to try it. If you don’t like it, you don’t have to keep using it. If you felt better without it, you can go back to using nothing or if you want to upgrade, you can upgrade," Laura added.