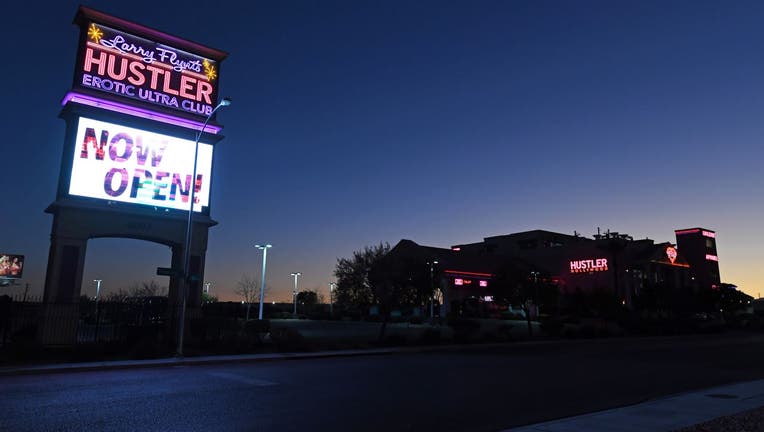 LAS VEGAS - Wearing a French maid-inspired lingerie costume and high heels, dancer JoJo Hamner waited patiently to get her COVID-19 vaccine in a line that snaked past a glittery hostess stand under a red-light chandelier.

When it was her turn, Hamner sat in a chair and held onto a small feather duster that completed her costume while a nurse administered the shot into her already-exposed arm.

Hamner then waited nearby for the required 15 minutes of observation, sitting with other vaccine recipients in leather chairs between plush purple booths, vacant stages and empty poles at this strip club in Las Vegas.

"This is just the most Vegas thing I’ve ever seen," she said of the experience.

Larry Flynt’s Hustler Club, with a spinning disco ball casting rainbow colors on the walls but more lights turned on than usual, was an unconventional site for a walk-in vaccination clinic. But as government officials and health workers try to address the slowing demand for COVID-19 vaccines, they’re increasingly turning to creative ways to incentivize people to show up and get a shot.

"This is just another way to access our population," said JoAnn Rupiper, the chief nurse of the Southern Nevada Health District, who monitored the walk-in clinic. "It might attract some people who like the novelty of it, I suppose."

New York officials are trying all sorts of incentives to encourage more residents to get the COVID vaccine. Just over half the state's adults are fully vaccinated five months into the vaccination program.

The clinic opened for several hours Friday night, administering shots to about 100 people before the strip club opened for its usual business. Several workers at the club, including Hamner, a dancer at a topless revenue, got their shots at the clinic along with members of the public.

Some people who showed up to get shots admitted they were reluctant to get the vaccine but decided to go for it if it meant visiting a strip club.

Roberto Montti, who lives near the club, said he had been putting off getting his shot but realized he should get it in order to resume his love of traveling.

Montti said he probably would have gotten his shot at a more humdrum venue but decided to go to the Hustler Club because it felt familiar.

"I was going to wait, I tell you that," said Las Vegas resident Michael Myers as he stood between a full-length picture of a naked woman and a sign promoting social distancing and other behaviors to mitigate the virus spread.

Push to get Bronx residents vaccinated

New York City is turning to new approaches to reach those who are still hesitant about getting the coronavirus vaccine, especially in black and brown neighborhoods.

Myers’ wife, Lisa Harper, said he changed his mind when she told him they could both get it at the Hustler club.

"A lot of people that wouldn’t ordinarily do it, a lot of guys, they said, they came here because it’s Hustler," his wife Harper said. "To take away the stodginess of it, to make it Hustler, it’s very clever."

"Nothing says vaccinations like a stripper pole," said the couple’s friend George Stoecklin, who joined them to get his shot.

Myers, 70, said he was reluctant to get the shot and worried about how fast it had been available. But he noted his age and said he was concerned about his ability to spread the virus and infect others, including his wife.

Myers said he was disappointed there were no dancers on the stage while he got his shot but said, "at least I got the scope of it."

More than 46% of the state’s population age 12 and over has received at least one shot of the vaccine, but Nevada health officials said this week that a steep drop-off in demand for shots may make it impossible for the state to reach a goal of vaccinating 75% of the eligible population.

Nevada officials have been increasingly turning to pop-up clinics in places like churches, schools and senior centers -- and now strip clubs -- to try to get more shots in arms.

As demand has slowed across the country, governments and businesses are turning to other creative ways to get shots in arms. Marijuana dispensaries have offered "joints for jabs," breweries have offered "shots and a chaser," and Ohio next week plans to debut a lottery system for residents who get vaccinated with a $1 million prize and five full-ride college scholarships.

Las Vegas officials said the Hustler Club approached them about holding the clinic after hosting in a similar vaccination site at the company's New Orleans location. The club offered its own incentives to those who show proof of vaccination: a membership card giving them and five friends free admission, a complimentary bottle of alcohol, dances from "a vaccinated entertainer" and other perks.

Ralph James, the general manager, said the business thought it would be a good chance to help the community and get back to normal faster. He acknowledged people may not typically think of the strip club as a public health partner but said, "this gives everyone a chance to see how clean it is and it’s a normal business just like any other business."