Lakers, Clippers vote to boycott remaining NBA season amid protests, other NBA teams did not

LOS ANGELES - The Los Angeles Lakers and Los Angeles Clippers voted to boycott the remaining few games of the NBA season Wednesday night, in their strongest statement yet against racial injustice following the police shooting of Jacob Blake in Kenosha, Wisconsin.

According to ESPN, the vote was described more as a poll than a binding action. NBA teams and players met in Orlando to discuss whether to continue with the season at all. Most other NBA teams voted to continue, sources told FOX 11's Liz Habib.

The owners are expected to meet to continue the discussion Thursday morning.

"The NBA and the NBPA today announced that in light of the Milwaukee Bucks' decision to not take the floor today for Game 5 against the Orlando Magic, today's three games -- MIL-ORL, HOU-OKC and LAL-POR have been postponed. Game 5 of each series will be rescheduled,'' the NBA tweeted Wednesday afternoon. 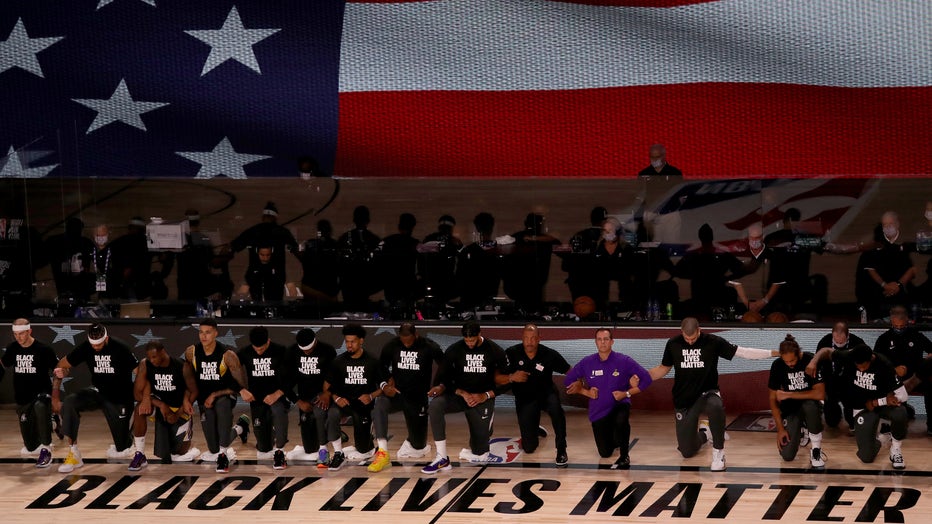 LAKE BUENA VISTA, FLORIDA - JULY 30: The Los Angeles Lakers and the LA Clippers wear Black Lives Matter Shirt and kneel during the national anthem prior to the game against the LA Clippers at The Arena at ESPN Wide World Of Sports Complex on July 30,

The Lakers-Trail Blazers game had been scheduled for 6 p.m.

There was no immediate word on the timetable for the rescheduled games. The entire NBA postseason is being played at the ESPN Wide World of Sports Complex in Lake Buena Vista, Florida, without spectators due to the coronavirus pandemic.

Fans in Los Angeles reacted to the sports boycotts over racial injustice.

Blake was shot several times in the back Sunday as he tried to enter his vehicle after a confrontation with police. Authorities have not provided any information about what led to the shooting, which was captured on video.  A federal civil rights investigation into the shooting was opened Wednesday night, according to the U.S. Department of Justice.

Lakers star LeBron James expressed his feelings shortly after the postponement was announced with a stark, all-caps tweet, writing: "F--- THIS MAN!!!! WE DEMAND CHANGE. SICK OF IT."

Lakers CEO Jeanie Buss, who is also a part-owner of the team, offered her support for the move.

"I was excited to see us play -- and hopefully close out our series -- tonight," she tweeted. "But I stand behind our players, today and always. After more than 400 years of cruelty, racism and injustice, we all need to work together to say enough is enough. #JusticeForJacobBlake #WeHearYou."