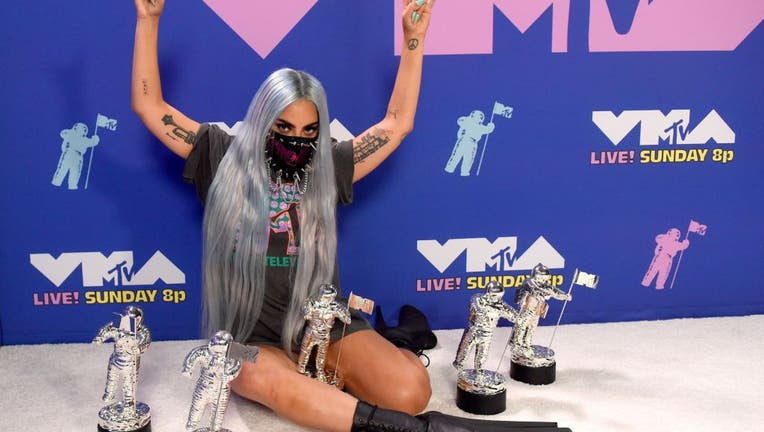 NEW YORK - Lady Gaga cleaned house at the 2020 MTV Video Music Awards, while The Weeknd took home the top prize — and both pop stars sent important messages to viewers about the current state of the world: “Wear a mask" and “Justice for Jacob Blake and Breonna Taylor."

Gaga won five honors Sunday, most of them for her No. 1 hit with Ariana Grande, “Rain on Me," which the pop stars performed live for the first time.

“Wear a mask. It’s a sign of respect," Gaga said during one of her several appearances onstage as she accepted awards like artist of the year, song of the year and the MTV Tricon award.

With an electronic mask, Gaga performed a medley of her songs, including “Stupid Love," “Chromatica II” and “911.” She and Grande were joined by a number of background dancers all wearing masks. 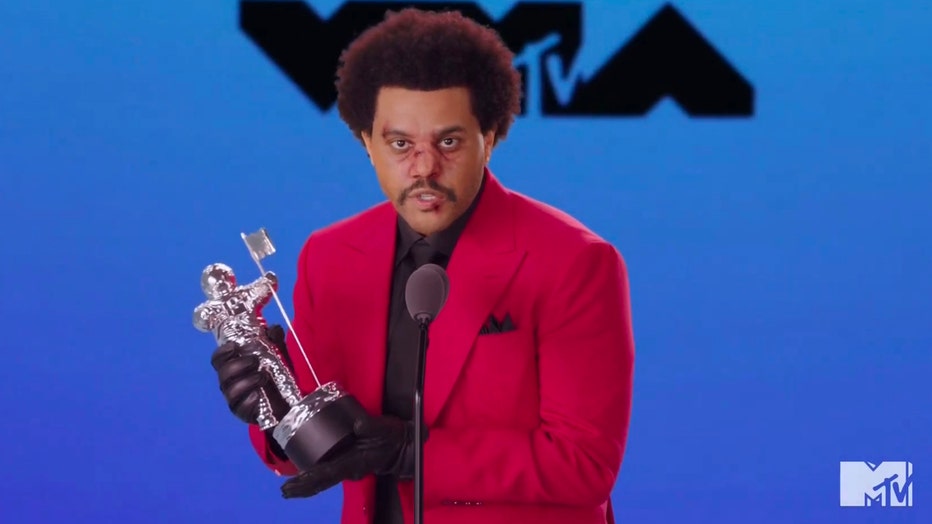 In this video grab issued Sunday, Aug. 30, 2020, by MTV, The Weeknd accepts the video of the year award for "Blinding Lights" during the MTV Video Music Awards. (MTV via AP)

The Weeknd, the first performer of the night, paid tribute to Blake and Taylor — two Black people who were shot by police officers — after winning video of the year and best R&B for “Blinding Lights."

“It’s really hard for me to celebrate right now and enjoy this moment, so I’m just going to say: justice for Jacob Blake and justice for Breonna Taylor,” he said.

The VMAs kicked off with another touching moment, as host Keke Palmer told viewers the show was dedicated to Chadwick Boseman, who died Friday at age 43 after privately battling colon cancer for four years.

“We dedicate tonight’s show to a man whose spirit touched so many. He’s a true hero, not just on-screen,” Palmer said. “His impact lives forever.”

The show also took moments to honor Juice WRLD and Pop Smoke, rappers who died in recent months though their current albums continue to dominate the pop charts and streaming services.

The Black Eyed Peas, who closed the two-hour-plus show with Nicky Jam and Tyga, ended their set by saying, “Black Lives Matter." And R&B star H.E.R. won the video for good award for her protest anthem about police brutality and systemic racism, “I Can't Breathe."

“I’m super proud of everybody speaking out on social injustice," H.E.R. said.

But most of the show was dedicated to fun performances — some pre-taped, some filmed in various locations in New York City, though the performance locations weren't always clear. The VMAs were originally supposed to be held at the Barclays Center in Brooklyn, but plans changed because of the pandemic.

Colombian singer and best Latin winner Maluma sang from Brooklyn, while The Weeknd performed from Manhattan. Pop all-stars BTS, who won four awards including best pop and best group, performed from South Korea. They were top-notch during the pre-taped performance, which featured their signature, skilled choreography. The seven band members danced and sang in sharp suits, at some points with the backdrop of Times Square behind them. 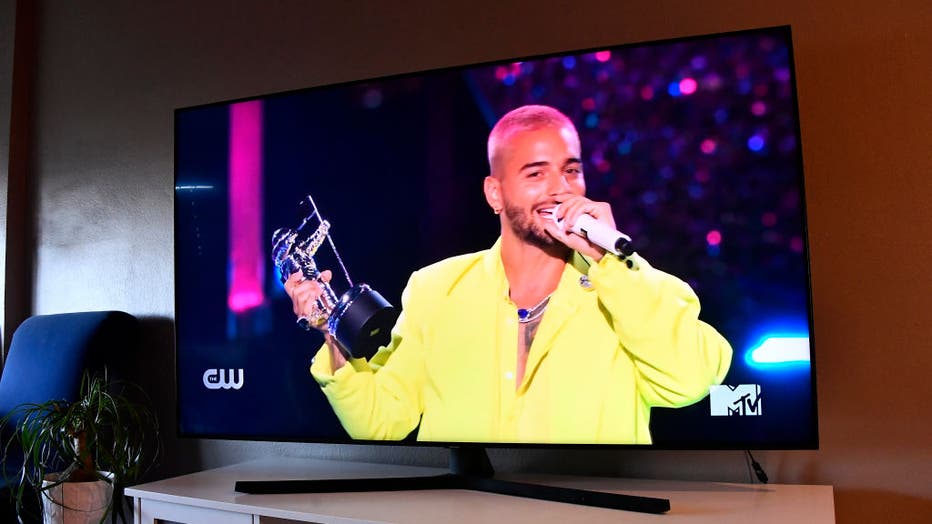 DaBaby, backed by the dance crew Jabbawockeez, ran through several of his hits, including “Rock Star.” During the latter track, he rapped while jumping on top of a police car, with a burning city as his backdrop. And Doja Cat, who was named Push best new artist, gave a futuristic performance of her hits “Say So" and “Like That."

Other performers included Latin boy band CNCO and Miley Cyrus, who ended her performance of “Midnight Sky" by sitting on top of a large disco ball, replicating her viral “Wrecking Ball" clip from 2013.

As for top honors, Grande tied BTS with four wins. Her No. 1 duet with Justin Bieber, “Stuck with U,” won best music video from home — one of two new awards MTV established as artists have made shifts because of the pandemic. CNCO won best quarantine performance for “MTV Unplugged at Home."

“This is the very first video that I’ve ever directed on my own. And I just I’m so grateful for this," Swift said. “I wanted to take an opportunity to say thank to the team who believed in me as a first-time director and made this video with me."