A 21-foot female orca, also known as a killer whale, died Wednesday morning after she apparently stranded herself on a beach in Florida, Flagler County officials said. The 7,000-pound whale was found along the shore of Jungle Hut beach, officials said. According to a spokesperson with the National Oceanic and Atmospheric Administration, there has never had a record of a stranded killer whale in Florida or the Southeast.

PALM COAST, Fla. - A 21-foot orca whale has died after officials said it stranded itself on a Flagler County Beach on Wednesday morning.

The Flagler County sheriff's office posted video to Facebook of the female killer whale that was found beached on the shore south of Jungle Hut Park in Palm Coast.

"This is extremely rare," said Blair Mase with the National Oceanic and Atmospheric Administration (NOAA). "We've never had a record of a stranded killer whale in Florida or the Southeast United States."

A 21-foot orca, also known as a killer whale, was found washed up on Flagler Beach in Florida. Unfortunately, the whale did not survive, officials said. Here is drone video shared by Flagler County government of officials working to remove the animal off the beach so a necropsy -- an animal autopsy -- could be performed.

The roadway near the beach was closed, but has since reopened. 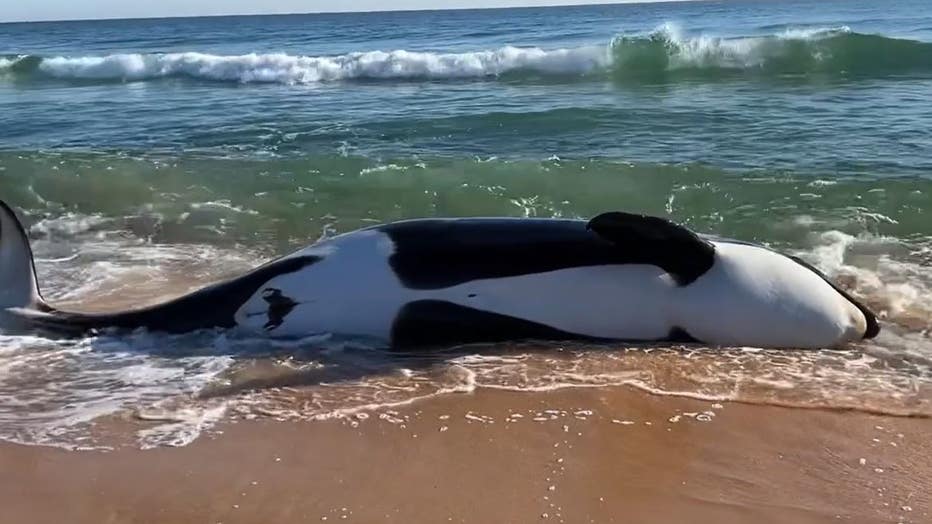 "Poor baby. I hope we find out why it was here and what was wrong with it," one Facebook viewer said.

"This is so upsetting," another person wrote.

According to SeaWorld, while killer whales can be found around the world, they are much more common in highly productive areas of cold-water upwelling including the Pacific Northwest, along northern Norway's coast in the Atlantic, and the higher latitudes of the Southern Ocean. In addition to being found in colder water, killer whales also have been seen in warm water areas such as Florida.