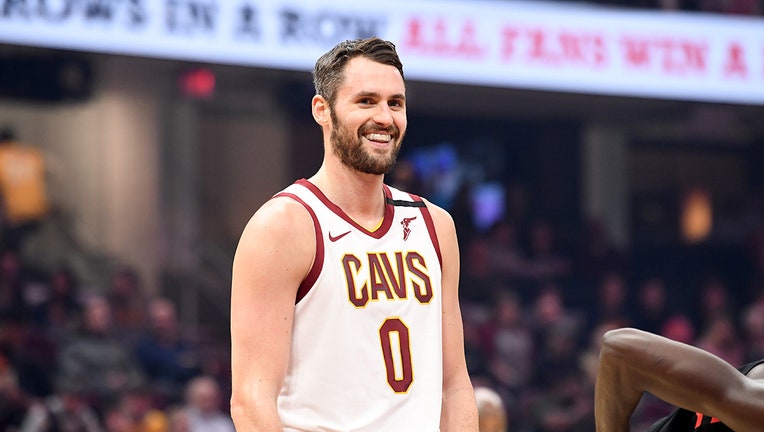 CLEVELAND, Ohio - Following the suspension of the NBA season on Wednesday, Kevin Love said he would donate $100,000 to arena and support staff of the Cleveland Cavaliers.

In a post on Instagram he wrote: “Through the game of basketball, we’ve been able to address major issues and stand together as a progressive league that cares about the players, the fans, and the communities where we work. I’m concerned about the level of anxiety that everyone is feeling.”

“I encourage everyone to take care of themselves and to reach out to others in need — whether that means supporting your local charities that are canceling events, or checking in on your colleagues and family,” the Cavaliers forward added.

The NBA suspended its entire season until further notice after a player on the Utah Jazz tested positive for coronavirus.

The test result was reported shortly before the Jazz were to take on the Oklahoma City Thunder at Chesapeake Energy Arena. The game was immediately canceled and the affected player was not in the arena, according to an NBA statement.

“The NBA is suspending game play following the conclusion of tonight’s schedule of games until further notice,” the statement read. “The NBA will use this hiatus to determine next steps for moving forward in regard to the coronavirus pandemic.”

The NBA shutdown could cost teams well into the hundreds of millions of dollars depending on how long the shutdown lasts.

CORONAVIRUS: EVERYTHING YOU NEED TO KNOW

Dallas Mavericks owner Mark Cuban said he had a plan to take care of workers at the American Airlines Center while the season was on hold.

The billionaire said he reached out to the employees when it became apparent that NBA games may be played without fans and he was trying to figure out what it would cost to support them financially as the NBA is on hold.