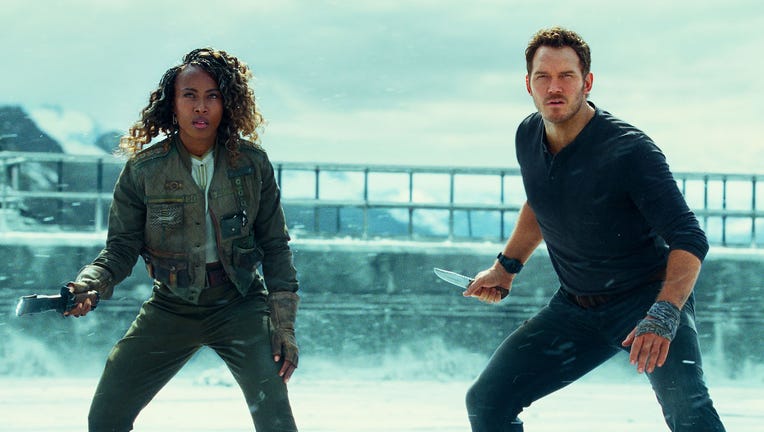 CHICAGO - "Let's be honest, no one's impressed by a dinosaur anymore," Bryce Dallas Howard's icy theme park manager Claire Dearing quips in "Jurassic World," the 2015 film that revived the "Jurassic Park" franchise for the modern era. And while that movie was ostensibly about refuting Claire's claim, it's hard not to feel like "Jurassic World Dominion" takes it to heart. If one were to rank the many things this messy, convoluted trilogy capper is trying to be, you'd list 'Indiana Jones homage', 'James Bond riff' and a 'Day After Tomorrow-style ecological thriller' all before arriving at 'Jurassic Park story.' Even with original franchise actors Laura Dern, Jeff Goldblum and Sam Neill back for prominent roles alongside the new generation of stars, this nostalgia-fueled popcorn flick is lacking one crucial element: It's a "Jurassic Park" movie where the dinosaurs feel almost incidental.

How did we get here? Well, blame director Colin Trevorrow, who vaulted from the indie hit "Safety Not Guaranteed"straight into co-writing and directing the vapid but wildly successful first "Jurassic World" film. Trevorrow took a step back from the director’s chair for its smaller, stronger sequel, "Jurassic World: Fallen Kingdom." And now — one notorious flop and a lost "Star Wars" film later — he returns to round out the "Jurassic" saga with the help of co-writer Emily Carmichael.

To its credit, "Dominion" is a much less toxic film than 2015’s "Jurassic World," which had a nasty streak of sexism and mean-spiritedness running through it. But it’s also far less cohesive and coherent than Trevorrow’s first installment. While "Jurassic World" at least had the compelling setting of a fully operational dinosaur theme park to play around with, "Dominion" over-broadens its scope. In trying to be about everything, it somehow becomes about nothing at all. 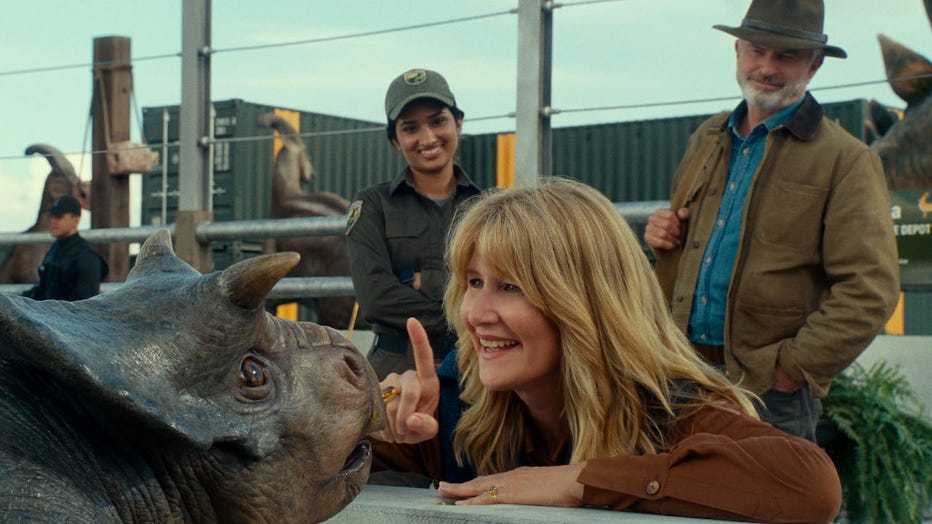 Set four years after "Fallen Kingdom," "Dominion" drops us in the world promised at the end of that film: an Earth on which humans and dinosaurs live alongside one another. (Best not to think too hard about how the small herd of dinos released at the end of "Fallen Kingdom" have somehow populated the entire planet — life finds a way, and all that.) Trevorrow has always been better at big-picture ideas than small-scale story choices, and there are some compelling ones in the film’s initial setup. Dinos aren’t rampaging cities like Godzilla, so much as tentatively co-existing alongside humans the way wild animals do now. Life mostly goes on as normal, except when a brontosaurus has to be carefully led away from a lumber mill — or a raptor wanders by your campsite.

It’s easy to imagine a compelling standalone story unfolding against the backdrop of humanity’s "new normal" — especially since "Dominion" makes the refreshing choice to bring many of its dinos to life with delightfully old-school animatronics. But there’s also a massive ensemble of pre-existing "Jurassic" characters this film wants to bring back into the fold. And, bafflingly, it does so through two intersecting stories that have almost nothing to do with the central dino-world premise: a globe-hopping spy adventure and a corporate espionage thriller. 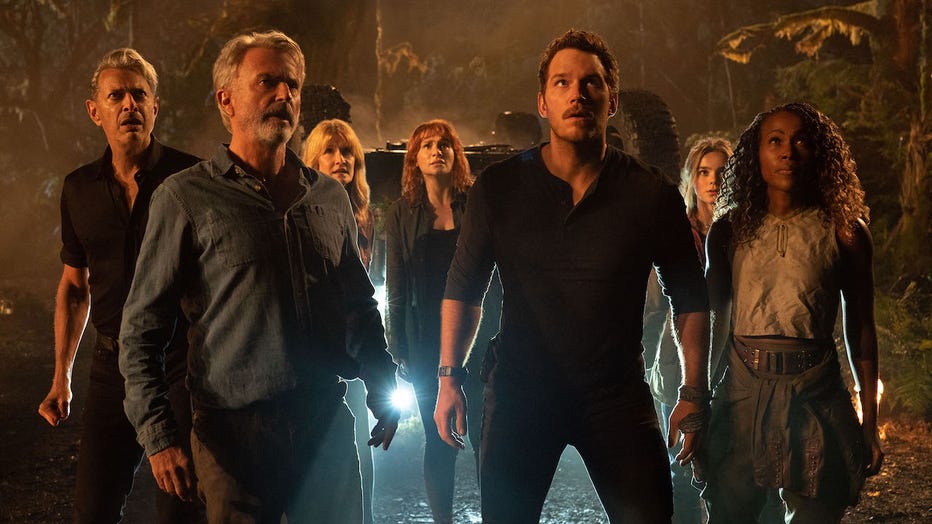 In the first throughline, Claire and her raptor-training paramour Owen Grady (Chris Pratt) must go searching for their adoptive daughter Maisie Lockwood (Isabella Sermon) after she’s kidnapped by baddies looking to exploit her clone DNA. And in the other, Dr. Ellie Sattler (Dern) reunites with Dr. Alan Grant (Neill) and Dr. Ian Malcolm (Goldblum) to solve a mystery about swarms of genetically modified locust that are threatening the world’s food supply. So, yes, if you’ve been waiting for a "Jurassic Park" movie that primarily focuses on human clones and giant bugs, you’re in luck!

RELATED: Marvel second installments ranked — including ‘Doctor Strange in the Multiverse of Madness’

It’s a case of overthinking the set-up and underthinking the actual plot, which often unfolds like an action-packed video game full of one-note minibosses and over-the-top car and plane chases. It doesn’t help that none of that runaround stuff even really matters in the end. All roads lead to the headquarters of Biosyn, an evil genetics company that happens to have its own dinosaur sanctuary (one our heroes must eventually escape from, á la every past "Jurassic" movie.)

To be fair, there are a handful of dino moments that do pop, particularly a sequence where Claire must silently crawl into swampy water to avoid a giant Therizinosaurus. It’s also fun to see Owen and hotshot pilot Kayla Watts (new "Jurassic" player DeWanda Wise) find themselves on literal thin ice with a savvy Pyroraptor. (Many of the film’s new dinosaurs are fully feathered — a scientifically accurate shift for the series.)

But the film too often mistakes bigger for better. An Atrociraptor chase scene initially zooms through the streets of Malta with some "Bourne"-esque flair, but eventually devolves into the kind of weightless, stakes-less CGI-fest that has characterized both of Trevorrow’s "Jurassic" films. 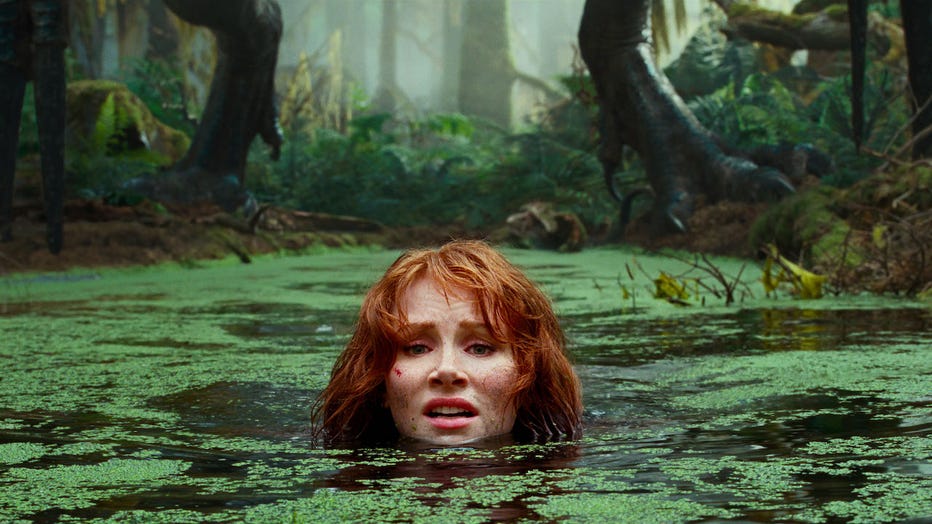 Indeed, for an "epic conclusion," the overlong "Dominion" mostly feels rather boring and bloodless with little that will really get the adrenaline flowing, other than perhaps from trying to stifle laughter at the absolutely absurd editing and geography of the film’s climax. (One character barely survives a perilous climb up a precarious ladder; then the movie cuts to a shot of four other people having made the climb no problem.)

When "Dominion" isn’t hitting notes of the ridiculous, it mostly settles for being inoffensive. Wise’s Han Solo-like rogue makes a fun addition to the series, as does Mamoudou Athie in a nothing of a role he imbues with a remarkable sense of humanity. And long-time fans will at least be happy to hear there’s no hint of character assassination happening to the returning franchise favorites (save for Blue the raptor, who’s disappointingly relegated to a minor supporting player after stealing the previous movie).

But aside from the occasional fun callback or spark of chemistry among the original trio (particularly Dern and Neill), it’s hard to sense a beating heart beneath all the blockbuster pageantry. "Jurassic World Dominion" certainly offers no shortage of spectacle, but it lacks what truly made the original 1993 "Jurassic Park" so special: a sense of wonder. Maybe there’s a reason no one is impressed by dinosaurs anymore.

How to watch "Jurassic World Dominion"

"Jurassic World Dominion" will dominate theaters nationwide when it opens June 10. It is not currently available to stream.