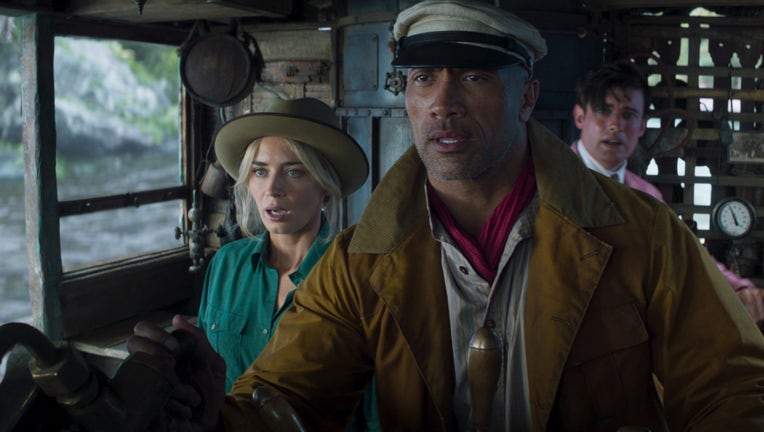 CHICAGO - A primary goal for any big screen adaptation should be to capture the spirit of the source material. In that respect, Disney’s "Jungle Cruise" can be called a success — though the source in this case is a theme park ride.

First setting sail in 1955, the Disneyland attraction (recently revamped) shares more than a seedling of story with the film that bears its name. Like the ride, taking this "Jungle Cruise" required a long wait, as the film was delayed by a year thanks to the Coronavirus pandemic. As with many such rides, this cinematic one cares more about atmosphere and experience than character or story.

The Disneyland ride and the film both do better with fun than with thrills, and both include some lazy stereotypes.

There are differences, of course: at 127 minutes, the film’s not short, while the ride doesn’t benefit from the charisma of two movie stars. But as with the "Pirates of the Caribbean" franchise, this movie manages about what’s expected of a film version of a goofy amusement park boat ride: It’s a pleasant distraction, and is just as likely to float in through one ear and then sail right on out through the other.

What’s the story of "Jungle Cruise"?

Emily Blunt plays Lily Houghton, an adventuress with a scientist’s mind in search of a mythical tree in the Amazon which is said to grant miraculous healing with its every bloom.

After "liberating" a precious artifact linked to the tree right out from under the nose of the nefarious German Prince Joachim (Jesse Plemons), Lily and her brother MacGregor (Jack Whitehall) set out to find the flowers that could revolutionize science and medicine, hiring shady river cruise captain Frank (Dwayne "The Rock" Johnson) to steer them through a landscape where, as Frank says, "everything is trying to kill you."

And if the myths are true, that includes the malevolent spirit of a conquistador (Edgar Ramírez) cursed to prowl the river as penance for the massacres he perpetrated in pursuit of the tree.

There are worse premises for a movie, but there are also far better, and "Jungle Cruise" liberally borrows from a number of others, among them the "Indiana Jones" films, "The Mummy" franchise, "The African Queen," and of course "Pirates of the Caribbean." The trouble with cribbing from other films, especially great ones, is that the comparison is rarely flattering.

Stacked up against the "Pirates" films, "Jungle Cruise" doesn’t totally suffer by comparison, but set it alongside "Raiders of the Lost Ark" and it’s a very different story. Director Jaume Collet-Serra bounces from escape to escape at an oddly leisurely pace, stopping occasionally for a scene meant to attach the audience to the characters or to Frank’s pet CGI jaguar, Proxima. Somehow, it’s far more successful at the latter. (Good kitty!)

Who should see "Jungle Cruise"?

Die-hard fans of The Rock aren’t likely to be disappointed by the man’s performance as Frank. He delivers plenty of eyebrow-waggles and punchy punchlines, but not much else. Still, that’s more than enough for this movie.

His performance also benefits from the presence of Emily Blunt, who anchors the movie with a kind of practical effervescence. She imbues Lily with an air of good-hearted chaos that should be, but somehow isn’t, at odds with the character’s obvious competence. As a foil for Johnson, she’s great, but even better as an adversary for Plemons, who brings some "Dr. Strangelove" energy to the proceedings. Whether he’s eating three peas in an exacting manner or chit-chatting with otherworldly spy-bees, Plemons adds an appealing weirdness to a film that could use even more than he can provide.

Yet at the end of the day, "Jungle Cruise" still makes for a good excuse to (safely) go to the movies. Adults may find themselves gleefully groaning at the puns or recoiling from the many, many snakes. Kids will have even more fun — this is a movie that sneaks in a fart joke before the six-minute mark, though some unsettling visual effects, mild violence and light innuendo make this a PG-13 film with PG energy.

Those looking originality or emotional resonance may want to seek another treasure, but for those content with a pleasant diversion should find it here. Great cinema it ain’t, but if The Rock fist-fighting a jungle cat, Emily Blunt swinging on a vine, and Jesse Plemons dementedly eating three peas appeals, head straight for the X on the map.

"Jungle Cruise" opens in theaters across the country and on Disney+ with Premier Access on Friday, July 30.

Gear up for "Jungle Cruise" with these free movies

Empire State (2013): Dwayne Johnson stars alongside Emma Roberts and Liam Hemsworth in this heist thriller, which is based on a true story. "When two friends attempt to rob an armored car depository containing millions, they must elude a veteran NYPD detective and angry local crime bosses."

Black Mass (2015): Jesse Plemons stars with "Pirates" actor Johnny Depp in this based-on-a-true-story thriller, in which "a notoriously violent mobster expands his considerable reach on the streets of Boston while also working directly with the FBI."

The Adventurer: The Curse of the Midas Box (2013): Here’s another adventure story about in which a powerful artifact is key: "17-year-old Mariah Mundi's life is turned upside down when his parents vanish and his younger brother is kidnapped. Following a trail of clues to the darkly majestic Prince Regent Hotel, Mariah discovers a hidden realm of child-stealing monsters, deadly secrets and a long-lost artifact that grants limitless wealth - but also devastating supernatural power." The cast includes Michael Sheen and "Game of Thrones" standout Lena Headey.

House of Wax (2005): Also directed by Jaume Collet-Serra, this horror movie strands a group of college kids in an abandoned town that has an unusual use for wax. Elisha Cuthbert and Chad Michael Murray star.