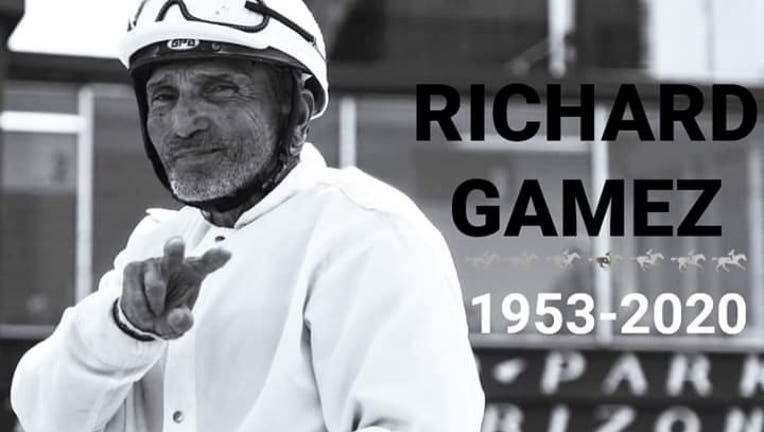 TUCSON, Ariz. (AP) — Longtime jockey Richard Gamez died Sunday after falling from his horse and getting trampled by another horse during a race in Tucson.

Gamez was leading in the fifth race at Rillito Park Racetrack when his horse stumbled and he was thrown from the saddle, according to the Rillito Park Foundation.

Gamez, 66, was trampled by at least one trailing horse and taken to Banner University Medical Hospital, where he died from his injuries.

“We’ve had jockeys get injured here before, but nothing like this,” Foundation President Jaye Wells said. “The accident was such that it didn’t really have anything to do with his age. I’m no medical expert, but we believe the brain injury was such that he wouldn’t have survived if he’d been 20.”

Gamez garnered two wins, two places and four shows during the first four weekends of the 2020 Winter Meet, a seven-weekend series that includes 14 races. The meet started Feb. 8 and is scheduled to continue until March 22.

His death marks the first at the Tucson track since the 1960s, Wells said. The horse Gamez was riding was not injured.

Gamez started racing at Rillito Park Racetrack when he was a child. He rode in more than 1,300 quarter horse races, winning nearly 200 races and earned more than $617,000, according to the American Quarter Horse Association.

“He was a good guy. A hell of a guy. He loved horses,” said Hector Pinedo, who knew Gamez for nearly 50 years and helped Gamez raise and ride horses for Pinedo's father before his death. “He loved the sport of kings, and he died doing what he did best.”

The racetrack and foundation are planning a celebration of Gamez’s life this weekend. Details of the celebration were still being planned on Tuesday.