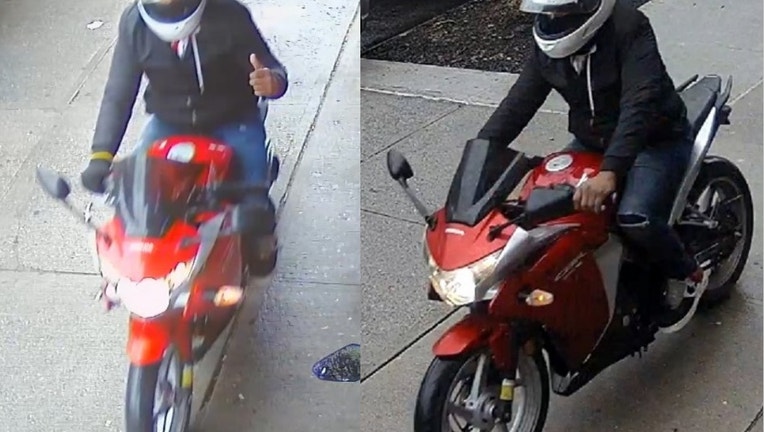 NEW YORK - The NYPD is hunting for a man on a motorcycle accused of ripping necklaces off of women across New York City.

According to authorities, on May 2, a 22-year-old woman was walking at the corner of Grand Concourse and East 150 Street in the Bronx when the suspect, riding a red and black motorcycle, snuck up on her from behind before grabbing her gold necklace valued at $800 and escaping.

That same day, the man struck again, grabbing a necklace and pendant from a 30-year-old woman waiting to cross the street at the intersection of Saint Nicholas Avenue in Manhattan.

Authorities say the suspect attempted to rob two other women the same day, one near Seaman Avenue and West 214 Street in the Inwood section of Manhattan, and the other on Nagle Avenue in Fort George, but neither attempt was successful.

During the fourth attempt, the robber was apparently foiled by the necklace's chain breaking, causing it to fall to the ground.

The suspect is described as a man with a light skin complexion, roughly 40 years old, with a medium build and was last seen wearing a black jacket, dark blue jeans ripped on the knees, black and gray sneakers, and was seen riding on a red and black motorcycle with a white helmet.