Substitutes Ritsu Doan and Takuma Asano scored late goals Wednesday to help Japan come from behind and upset Germany 2-1, thrilling fans of the Japanese national team from Tokyo all the way to New York City.

NEW YORK - Substitutes Ritsu Doan and Takuma Asano scored late goals Wednesday to help Japan come from behind and upset Germany 2-1, thrilling fans all across the world and here in New York City.

Loyal fans of the Samurai Blue, as the national soccer team is known, gathered early Wednesday morning to cheer for their heroes at the FIFA World Cup.

The matchup was the first time the two teams had ever faced off in the World Cup.

"I can't believe it, I cannot believe it really," one fan told FOX 5 NY after the game. "I thought it would end in a tie." 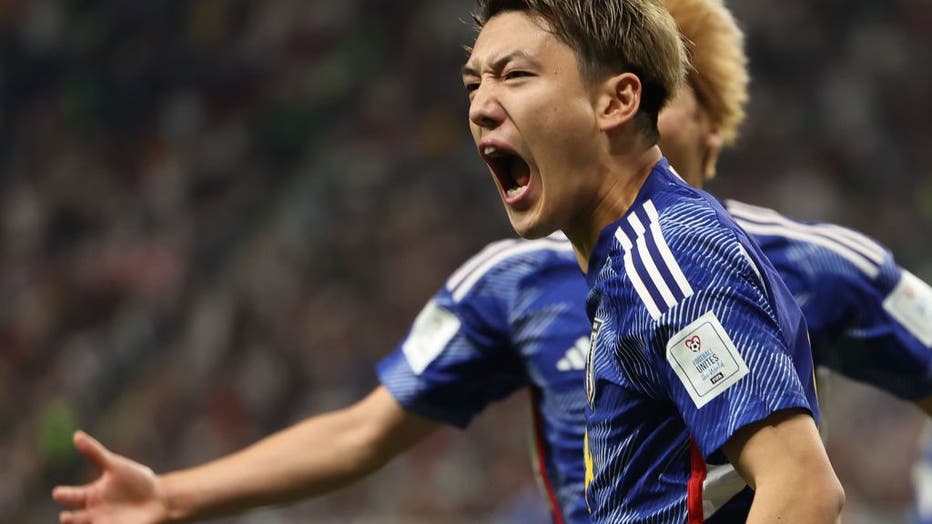 Doan Ritsu of Japan celebrates after scoring during the Group E match between Germany and Japan at the 2022 FIFA World Cup at Khalifa International Stadium in Doha, Qatar, Nov. 23, 2022. (Photo by Pan Yulong/Xinhua via Getty Images)

Ilkay Gündogan had given four-time champion Germany the lead with a first-half penalty. But Doan, who plays for Freiburg, pounced on a rebound to equalize in the 76th minute after Germany goalkeeper Manuel Neuer blocked a shot from Takumi Minamino.

Then Asano, who plays for Bochum, sprinted clear of Nico Schlotterbeck and beat Neuer from a narrow angle in the 83rd minute.

Germany outplayed Japan for much of Wednesday's match and had 24 attempts on goal compared to Japan’s 11. The Japanese had only 24% possession.

"It's brutally disappointing, not only for the players, but also the coaching team," Germany coach Hansi Flick said. "We deserved to go in front. It was more than deserved. Then you have to say that Japan gave us a lesson in efficiency."

The match was played a day after Argentina's 2-1 upset loss to Saudi Arabia.