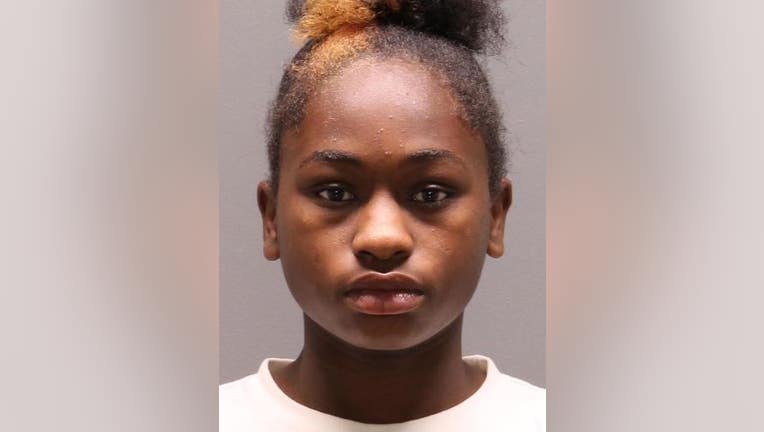 Gamara Mosley, 14, faces third-degree murder and conspiracy charges for the traffic cone beating death of James Lambert Jr. She is the second 14-year-old charged in the case. (Philadelphia Police Department)

PHILADELPHIA - Two teen girls turned themselves in for the attack on an older man who later died from being beaten with a traffic cone by a group of teens. One of those teens is now facing a murder charge, while the other has been released.

Police say a group of teen offenders was wanted in connection with the death of James "Simmie" Lambert Jr., 73, in June.

According to authorities, Lambert was attacked by the group on the 2100 block of Cecil B. Moore Avenue on June 24 at 2:38 a.m.

The Philadelphia Police Department released surveillance video of the attack and announced the city’s $20,000 reward for information leading to an arrest in the case.

Girl, 14, charged with murder in deadly attack of 73-year-old man

A 14-year-old is charged with murder while another teen girl reportedly turned herself in for the attack on an older man who later died from being beaten with a traffic cone by a group of teens.

The video appeared to show a group of teens surrounding Lambert and some of them could be seen picking up the cone and hitting Lambert.

The City of Philadelphia is offering a $20,000 reward that leads to the arrest of a group of "teen offenders" caught on camera hitting a 72-year-old man in the head with objects, including a traffic cone. The man died from injuries the next day, police say.

Officials say Lambert was knocked to the ground and he was transported to the hospital where he later died from head injuries.

Two brothers, ages 10 and 14, turned themselves into authorities on Monday. The older of the two, identified as Richard Jones, faces a murder charge as an adult, according to officials. His 10-year-old brother was released and is not being charged with the crime.

An attorney for the younger brother says they were both sleeping over a family member's house night of that attack. She also claims the gathering was not planned, and things not captured on surveillance video will come out during trial.

"Events that lead up to this, that don’t make it right, don’t negate what happened, but put some things into perspective," said attorney Rania Major.

A 14-year-old boy is facing a murder charge after police say a 73-year-old man was beaten and killed by a group of juveniles in North Philadelphia last month.

According to police, 14-year-old Gamara Mosley was charged with third-degree murder and conspiracy.

Authorities confirmed with FOX 29 that Mosley is being charged as an adult.

Officials say she was seen hitting the 73-year-old man twice with the traffic cone on camera and possibly another time off-camera.

"My client is 14 years of age. I would ask that everyone hold judgment," the girl's attorney Lonny Fish said.

He also said the girl's mother hopes her daughter will be in a school in a juvenile facility.

The 13-year-old girl was reportedly released and not charged after her attorney Donte Mills claims investigators decided she didn't cause Lambert's death.

"She took a stand in that moment, and in fact, tried to push people away," Mills said. "She tried to stop them from attacking Mr. Lambert."

Police sources tell FOX 29's Kelly Rule that although seven juveniles are seen in the surveillance video, only two are expected to be charged.