The Democratic-controlled House Ways and Means Committee voted along party lines Tuesday to issue a report on Donald Trump’s tax returns — likely offering a deeper look into financial records that the former president tried to shield from the public.

WASHINGTON - The IRS failed to pursue mandatory audits of Donald Trump on a timely basis during his presidency, a congressional panel found on Tuesday, raising questions about statements by the former president and leading members of his administration who claimed he could not release his tax filings because of the ongoing reviews.

A report released by the Democratic majority on the House Ways and Means Committee indicated the Trump administration may have disregarded an IRS requirement dating back to 1977 that mandates audits of a president's tax filings. The IRS only began to audit Trump's 2016 tax filings on April 3, 2019, more than two years into Trump's presidency and just months after Democrats took control of the House. That date coincides with Rep. Richard Neal, the panel chairman, asking the IRS for information related to Trump's tax returns.

There was no suggestion that Trump, who has announced a third presidential run, sought to directly influence the IRS or discourage the agency from reviewing his tax information. But the report found that the audit process was "dormant, at best."

The 29-page report was published just hours after the committee voted along party lines to release Trump's tax returns in the coming days, raising the potential of additional revelations related to the finances of the onetime businessman who broke political norms by refusing to voluntarily release his returns as he sought the presidency. The vote was the culmination of a yearslong fight between Trump and Democrats that has played out everywhere from the campaign trail to the halls of Congress and the Supreme Court.

Democrats on the tax-writing Ways and Means Committee argued that transparency and the rule of law were at stake, while Republicans countered that the release would set a dangerous precedent with regard to the loss of privacy protections.

"Over our objections in opposition, Democrats in the Ways and Means Committee have unleashed a dangerous new political weapon that overturns decades of privacy protections," he told reporters. "The era of political targeting, and of Congress’s enemies list, is back and every American, every American taxpayer, who may get on the wrong side of the majority in Congress is now at risk." 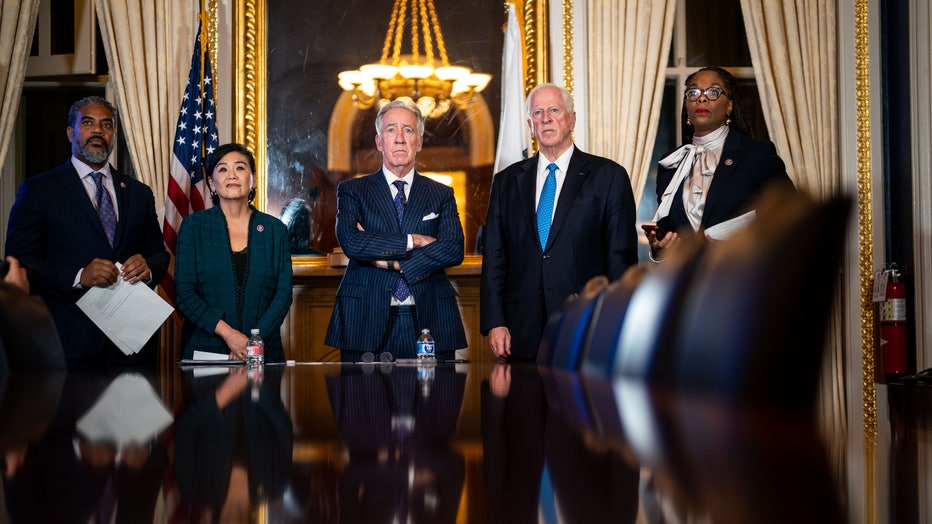 Trump spent much of Tuesday evening releasing statements on his social media platform that were unrelated to his tax returns. The IRS didn't immediately respond to a request for comment.

But an accompanying report released by Congress' nonpartisan Joint Committee on Taxation also found repeated faults with the IRS’s approach toward auditing Trump and his companies.

IRS agents in charge of the audits repeatedly did not bring in specialists with expertise assessing the complicated structure of Trump’s holdings. They frequently determined that a limited examination was warranted because Trump hired a professional accounting firm that they assumed would make sure Trump "properly reports all income and deduction items correctly."

"We must express disagreement with the decision not to engage any specialists when facing returns with a high degree of complexity," the tax committee report states. "We also fail to understand why the fact that counsel and an accounting firm participated in tax preparation ensures the accuracy of the returns."

The reports released Tuesday renewed scrutiny on one of the biggest questions that has surrounded Trump since he shifted from a reality television star to an unlikely presidential candidate: Why did he abandon the post-Watergate tradition of White House hopefuls releasing their tax returns? Trump and those around him have consistently said that IRS audits prevented him from doing so.

"I would love to give them, but I’m not going to do it while I’m under audit," Trump said on April 10, 2019, before boarding the presidential helicopter. 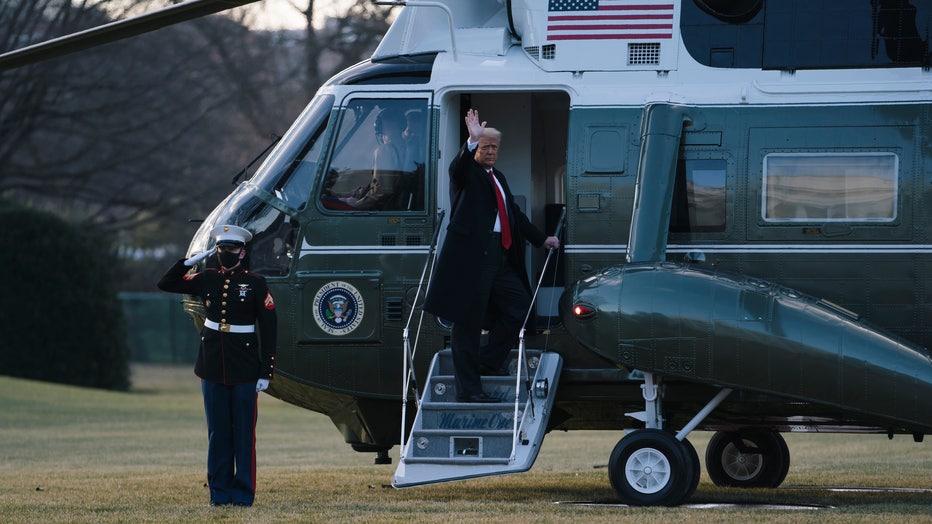 President Donald Trump boards Marine One as he departs the White House on January 20, 2021 in Washington, DC. (Photo by Eric Thayer/Getty Images)

There are no laws that would have barred Trump from voluntarily releasing his returns even if they were being audited. But when Trump spoke of being audited, it's unclear whether he was referring to the mandatory process specifically aimed at presidents or prior reviews that are more typical for wealthy individuals.

The New York Times found that before he entered the White House, Trump was facing an IRS audit potentially tied to a $72.9 million tax refund arising from $700 million in losses he claimed in 2009. The documents released Tuesday indicate that Trump continued to collect tax benefits from those losses through 2018.

"What happened?" said Steven Rosenthal, senior fellow at the Urban-Brookings Tax Policy Center. "If it was not resolved, the IRS stalled. If it was resolved in Trump’s favor, then maybe the IRS rolled over and played dead. That’s what we have to find out.’’

The report raised multiple red flags about aspects of Trump's tax filings, including his carryover losses, deductions tied to conservation and charitable donations, and loans to his children that could be taxable gifts.

In response to the findings, the Ways and Means Committee is proposing legislation to beef up the IRS’s approach, requiring an initial report no later than 90 days from the filing of a president’s tax returns. House Speaker Nancy Pelosi said the chamber would "move swiftly" to advance the legislation.

Democrats argue that the IRS is ill-equipped to audit high-income, complex tax returns, and instead targets filers in lower-income brackets — something they have tried to remedy with their work on the panel.

"Because of the dismantling of funding to the IRS, they have not been able to do their job," said Rep. Steven Horsford, D-Nev. "They did not have the specialized staff to do it for that high-income category — not just this person, but people who fall into that category." 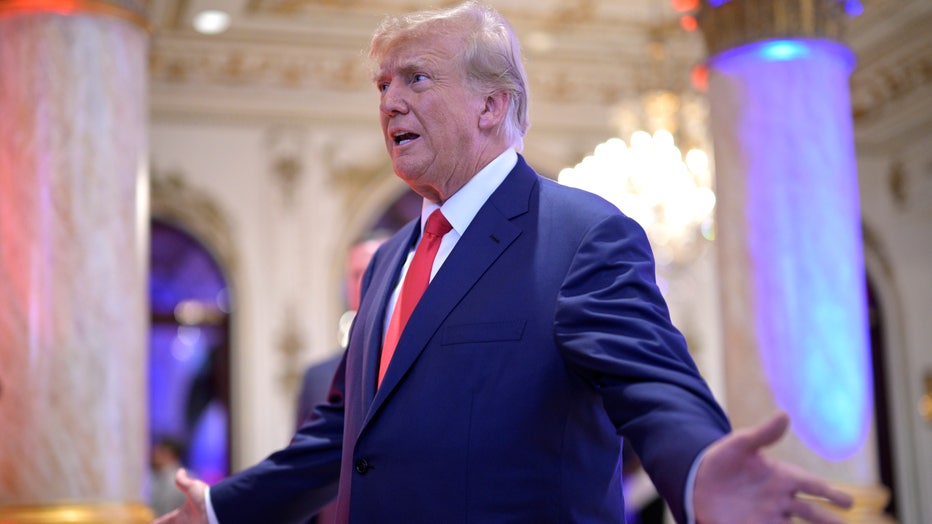 But Republicans have vowed to cut a recent influx of funding for more IRS agents. That's the first bill they will consider upon taking the House majority in less than two weeks.

The committee’s move represents yet another challenge for Trump. Just a day earlier, the House Jan. 6 committee voted to make a criminal referral to the Justice Department for Trump’s role in sparking the violent insurrection at the U.S. Capitol. He’s also facing an intensifying investigation in Atlanta for efforts to overturn the 2020 election results in Georgia. And he’s the subject of growing criticism from fellow Republicans for contributing to the party’s underwhelming performance in last month’s midterms.

The House January 6 Committee voted on Dec. 19, 2022 to send referrals to the Justice Department recommending former President Donald Trump be criminally prosecuted. The referrals include obstructing an official proceeding of Congress, conspiracy to defraud the federal government, making a false statement, and inciting, assisting, or aiding and comforting an insurrection.

Trump's family business, The Trump Organization, was convicted earlier this month on tax fraud charges for helping some executives dodge taxes on company-paid perks such as apartments and luxury cars.

Manhattan district attorney Alvin Bragg told The Associated Press in an interview last week that his office’s investigation into Trump and his businesses continues.

"We’re going to follow the facts and continue to do our job," Bragg said.

Trump has argued there is little to learn from his tax returns even as he has fought to keep them private.

"You can’t learn much from tax returns, but it is illegal to release them if they are not yours!" he complained on his social media network last weekend.