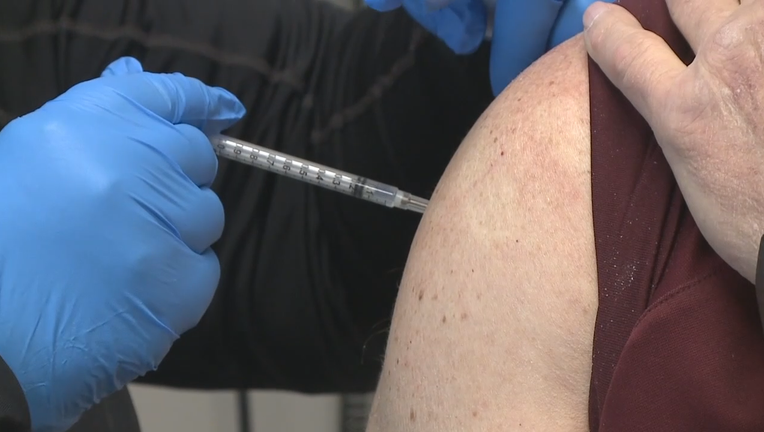 A coronavirus vaccine is administered in a person's arm.

DES MOINES - Most Iowa counties declined any more coronavirus vaccine for this week amid a slack in demand, and an official in a county with one of the lowest vaccination rates said Wednesday that she has given up arguing with people to get shots.

Iowa Department of Public Health officials said based on demand from counties, the state ordered just 7,850 doses of vaccine for this week, with 81 of the state’s 99 counties ordering no vaccine. Federal authorities made more than 63,000 doses available to Iowa, with those not used remaining available for the state if needed, said agency spokeswoman Sarah Ekstrand.

"Counties who declined a portion of or the full allocation report vaccine remains widely available within the county," she said.

Only Johnson County in eastern Iowa reported more than half of its population fully vaccinated, at 53.2%, according to the U.S. Centers for Disease Control and Prevention. Polk County, the state’s most populous, has fully vaccinated 43.5% of the population.

Wayne County Public Health Administrator Shelley Bickel said in the past she has tried to convince people to get vaccination but she's stopped those attempts.

"They’ll sit and argue with you. We’re just tired of fighting," she said. "We’re not pushing anyone. We figure if you want it you can get it."

Several companies are looking at different ways to deliver a COVID-19 vaccine to a person. So instead of an injection, you might take a pill, nasal spray or skin patch.

Bickel has seen slow improvement in the past few weeks but now that plenty of vaccine is available, fewer people want shots. She attributed that resistance to the county's conservative residents, many of whom have long declined to wear masks or get vaccinated.

"I just can tell you it’s very, very conservative here. You would never catch people during this whole thing wearing a mask unless they're elderly," she said. "I don’t know, it’s just a whole different thought process."

She noted the county of about 6,400 people also has a significant Amish population that typically opted not to get vaccinated.

The CDC lists five counties in Iowa with a high rate of virus spread. Three of them — Adams, Franklin and Palo Alto — have fewer than 40% of the population fully immunized. Cerro Gordo County in north-central Iowa has 44.6% of its population vaccinated and Audubon County has 45.3% fully vaccinated.

Cerro Gordo County has in the past seven days had 49 new virus cases, a 25.6% increase and its positivity rate rose to 4.3%.

Iowa ranks 17th in the nation for the percentage of population fully vaccinated with 1.35 million people or 42.9% of the population completing vaccination as of Wednesday, according to data from the CDC.

Iowa ranked 23rd in the nation for the percentage of population that has received at least one dose of vaccine with 1.53 million people or 48.6%.

Once the CDC approves Pfizer's COVID-19 vaccine for children between the ages of 12 and 15, New York will begin administering shots to that age group, the mayor and governor said.

Nationally 39.7% of the population has been fully vaccinated and 49.7% have received at least one dose as of Wednesday.

Iowa Gov. Kim Reynolds said weeks ago that there is no reason to fear COVID-19 and that Iowans know how to manage the virus.

Last week, the Legislature approved and Reynolds signed into law a measure that prevents local city, county and school officials from requiring masks.