'It's about survival': Iowa teen who killed her rapist ordered to pay $150K restitution to man's family

A teenage human trafficking victim who was initially charged with first-degree murder after she stabbed her accused rapist to death was sentenced in an Iowa court to five years of closely supervised probation and ordered to pay $150,000 restitution to the man’s family.

DES MOINES, Iowa - An Iowa teenage sex trafficking victim who stabbed her rapist to death was sentenced by a judge on Tuesday to five years of closely supervised probation and must pay $150,000 restitution to her abuser's family.

Pieper Lewis, 17, stabbed her abuser, 37-year-old Zachary Brooks, more than 30 times in June 2020. She was initially charged with first-degree murder.

Last year, Lewis pleaded to involuntary manslaughter and willful injury, both of which were punishable by up to 10 years in prison. However, Polk County District Judge David Porter deferred those prison sentences on Tuesday, meaning Lewis could serve 20 years if she violates her probation.

Porter said he ordered Lewis to pay restitution to Brooks' family because the court was "presented with no other option." He explained that the restitution is mandatory under Iowa law.

Lewis was 15 when she stabbed Brooks more than 30 times in a Des Moines apartment. Officials have said Lewis was a runaway who was seeking to escape an abusive life with her adopted mother and was sleeping in the hallways of a Des Moines apartment building when a 28-year-old man took her in before forcibly trafficking her to other men for sex.

Lewis said one of those men was Brooks and that he had raped her multiple times in the weeks before his death. She recounted being forced at knifepoint by the 28-year-old man to go with Brooks to his apartment for sex. She told officials that after Brooks had raped her yet again, she grabbed a knife from a bedside table and stabbed Brooks in a fit of rage.

Police and prosecutors have not disputed that Lewis was sexually assaulted and trafficked. But prosecutors have argued that Brooks was asleep at the time he was stabbed and not an immediate danger to Lewis.

Iowa is not among the dozens of states that have a so-called safe harbor law that gives trafficking victims at least some level of criminal immunity.

RELATED: Woman sues San Francisco police after rape kit DNA was used to ID her as suspect in crime

Lewis, who earned her GED while being held in juvenile detention, acknowledged in a statement prior to her sentencing that she struggled with the structure of her detention, including "why I was treated like fragile glass" or wasn't allowed to communicate with her friends or family.

"My spirit has been burned, but still glows through the flames," she read from a statement she had prepared. "Hear me roar, see me glow, and watch me grow." 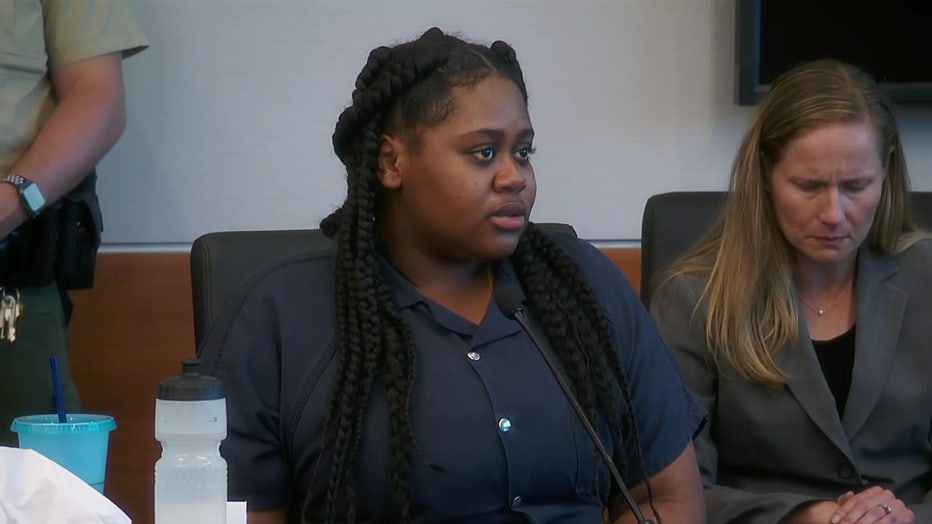 Pieper Lewis speaks in court during her sentencing.

The Associated Press does not typically name victims of sexual assault, but Lewis agreed to have her name used previously in stories about her case.

RELATED: US Marshals rescue 14 missing or endangered children across Louisiana

Prosecutors took issue with Lewis calling herself a victim in the case and said she failed to take responsibility for stabbing Brooks and "leaving his kids without a father."

The judge peppered Lewis with repeated requests to explain what poor choices she made that led up to Brooks' stabbing and expressed concern that she sometimes did not want to follow rules set for her in juvenile lockup.

"The next five years of your life will be full of rules you disagree with, I'm sure of it," Porter said. He later added, "This is the second chance that you've asked for. You don't get a third."

Lewis said in court, "I took a person's life. My intentions that day were not to just go out and take somebody’s life. In my mind, I felt that I wasn't safe, and I felt that I was in danger, which resulted in the acts. But it doesn't take away from the fact that a crime was committed."

She said she regretted the stabbing, "but to say there is one victim is absurd."

A GoFundMe page started by the teen's former teacher, Leland Schipper, has already raised far more than the amount she has been ordered to pay.

Hours after Lewis was ordered on Tuesday to pay $150,000 in restitution, the GoFundMe page surpassed that amount. By 4 p.m. Wednesday afternoon, the amount raised skyrocketed to more than $240,000 as news of her story spread online.

"Pieper wants to go to college, she wants to create art, and she wants to advocate for other girls who find themselves in situations like she endured," Schipper wrote in the fundraiser's description. "She does not deserve a massive debt looming over her, holding her back from pursuing her ambitions."

With the GoFundMe now exceeding the amount she owes, Schipper said any additional funds will be used to "remove financial barriers for Pieper in pursuing college/university or starting her own business," and will give the teen the "financial capacity to explore ways to help other young victims of sex crimes."

Karl Schilling with the Iowa Organization for Victim Assistance said a bill to create a safe harbor law for trafficking victims passed the Iowa House earlier this year, but stalled in the Senate under concerns from law enforcement groups that it was too broad.

"There was a working group established to iron out the issues," Shilling said. "Hopefully it will be taken up again next year."

Iowa does have an affirmative defense law that gives some leeway to victims of crime if the victim committed the violation "under compulsion by another’s threat of serious injury, provided that the defendant reasonably believed that such injury was imminent."

Prosecutors argued Tuesday that Lewis waived that affirmative defense when she pleaded guilty to manslaughter and willful injury.