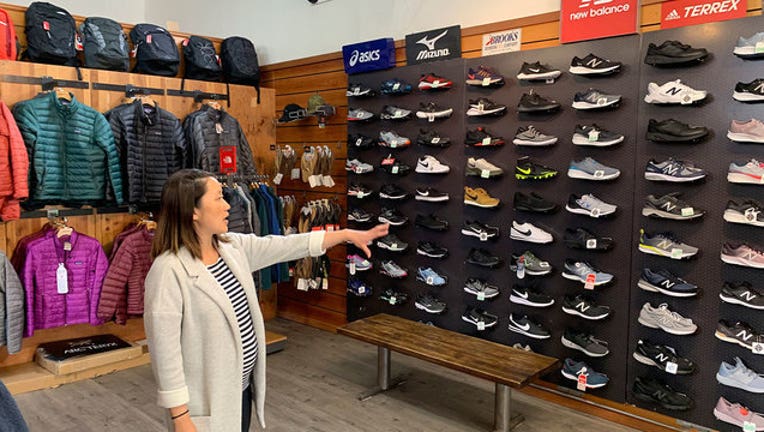 In this photo, Jennifer Lee, whose family owns Footprint shoe store in San Francisco, points to a wall of athletic shoes, many of which are made in China and will be subject to new U.S. tariffs on Chinese goods starting Sept 1. (AP Photo/Terry Chea)

WASHINGTON (AP) - The United States and China on Sunday put in place their latest tariff increases on each other's goods, potentially raising prices Americans pay for some clothes, shoes, sporting goods and other consumer items before the holiday shopping season.

President Donald Trump said U.S.-China trade talks were still on for September. "We'll see what happens," he told reporters as he returned to the White House from the Camp David presidential retreat. "But we can't allow China to rip us off anymore as a country."

The 15% U.S. taxes apply to about $112 billion of Chinese imports. All told, more than two-thirds of the consumer goods the United States imports from China now face higher taxes. The administration had largely avoided hitting consumer items in its earlier rounds of tariff increases.

But with prices of many retail goods now likely to rise, the Trump administration's move threatens the U.S. economy's main driver: consumer spending. As businesses pull back on investment spending and exports slow in the face of weak global growth, American shoppers have been a key bright spot for the economy.

"We have got a great economy," said Sen. Pat Toomey, R-Pa. "But I do think that the uncertainty caused by volatile tariff situation and this developing trade war could jeopardize that strength, and that growth, and that is I think that's a legitimate concern," he told ABC's "This Week."

As a result of Trump's higher tariffs, many U.S. companies have warned that they will be forced to pass on to their customers the higher prices they will pay on Chinese imports. Some businesses, though, may decide in the end to absorb the higher costs rather than raise prices for their customers.

In China, authorities began charging higher duties on American imports at midday Sunday, according to employees who answered the phone at customs offices in Beijing and the southern port of Guangzhou. They declined to give their names.

Tariffs of 10% and 5% apply to items ranging from frozen sweet corn and pork liver to marble and bicycle tires, the government announced earlier.

After Sunday's move, 87% of textiles and clothing the United States buys from China and 52% of shoes will be subject to import taxes.

On Dec. 15, the Trump administration is scheduled to impose a second round of 15% tariffs - this time on roughly $160 billion of imports. If those duties take effect, virtually all goods imported from China will be covered.

The Chinese government has released a list of American imports targeted for penalties on Dec. 15 if the U.S. tariff hikes take effect. In total, Beijing says Sunday's penalties and the planned December increases will apply to $75 billion of American goods.

Washington and Beijing are locked in a war over U.S. complaints that China steals U.S. trade secrets and unfairly subsidizes its own companies in its drive to develop global competitors in such high-tech industries as artificial intelligence and electric cars.

"I give the president credit for challenging China on some of its really egregious behavior" on intellectual property and technology transfers, for example, Toomey said. He said he hopes that's what Trump's focus is, "not just the fact that Chinese clothing and shoes are popular among consumers. That's not the problem."

If China changes its behavior "in a meaningful way in that area ... then we will have ended up in a better place. That's what I'm hoping for. But let's be honest. In the meantime, we're doing damage. It's a double-edged sword," he said.

To try to force Beijing to reform its trade practices, the Trump administration has imposed import taxes on billions of dollars' worth of Chinese imports, and China has retaliated with tariffs on U.S. exports.

"To take on China there has to be a multilateral approach. One country can't take on China to try to dry up its overcapacity because they just send it through to you in other ways," he said.

Trump has insisted that China itself pays the tariffs. But in fact, economic research has concluded that the costs of the duties fall on U.S. businesses and consumers. Trump had indirectly acknowledged the tariffs' impact by delaying some of the duties until Dec. 15, after holiday goods are already on store shelves.

The president has also announced that existing 25% tariffs on a separate group of $250 billion of Chinese imports will increase to 30% on Oct. 1.

That cost could weaken an already slowing U.S. economy. Though consumer spending grew last quarter at its fastest pace in five years, the overall economy expanded at just a modest 2% annual rate, down from a 3.1% rate in the first three months of the year.

The economy is widely expected to slow further in the months ahead as income growth slows, businesses delay expansions and higher prices from tariffs depress consumer spending. Companies have already reduced investment spending, and exports have dropped against a backdrop of slower global growth.

Americans have already turned more pessimistic. The University of Michigan's consumer sentiment index, released Friday, fell by the most since December 2012.

"The data indicate that the erosion of consumer confidence due to tariff policies is now well underway," said Richard Curtin, who oversees the index.

Some retailers may eat the cost of the tariffs. Target confirmed to The Associated Press that it warned suppliers that it won't accept cost increases arising from the China tariffs. But many smaller retailers won't have the bargaining power to make such demands and will pass the costs to customers.

Philip Levy, chief economist at the San Francisco freight company Flexport who was an adviser in President George W. Bush administration, said it's hard to say for sure when the latest tariffs may hit U.S. customers in the form of higher prices.

But, he added, "If you had to pick a time to do it, this is the worst possible time" because it's when the bulk of holiday goods are brought into the country.