Snow showers continue to move away from the region today as the storm gradually clears the area. It will be breezy and cold with slick conditions on many roadways, bridges and overpasses. But the rest of the week looks much quieter with cooler than normal temperatures.

ALBANY, N.Y. - A seemingly endless winter storm that hindered travel across most of the country over the long holiday weekend delivered a last wallop as it swoop through the Northeast, dumping heavy snow, shuttering hundreds of schools and bedeviling commuters in the region as late as Tuesday morning. The storm dropped more than a foot of snow on parts of the region late Sunday and Monday and could bring 10 to 24 inches (25 to 60 centimeters) total by Tuesday from Pennsylvania to Maine, forecasters said. 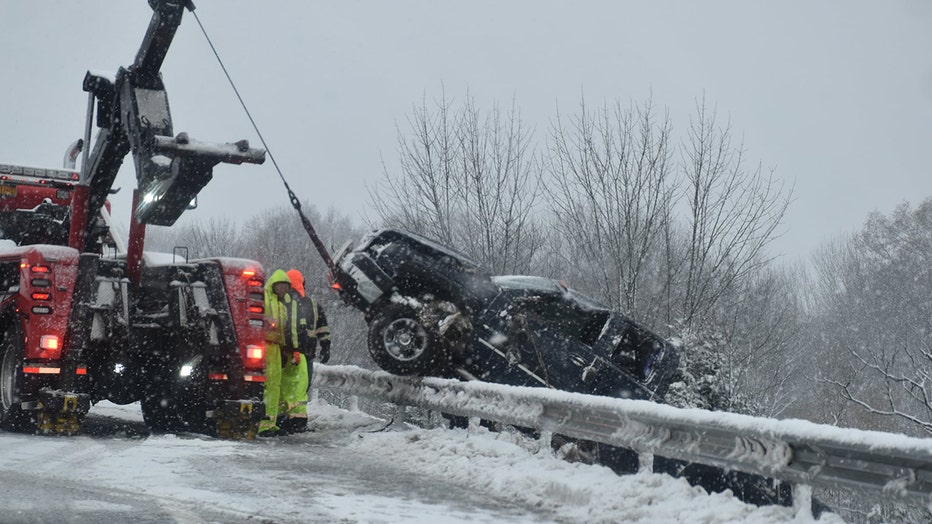 New York state troopers responded to numerous crashes on Dec. 2, 2019. This truck went off I-84 in the Town of Montgomery. (New York State Police)

"It's moving very slowly, so the snow is just going to continue through the day," National Weather Service meteorologist Jennifer Vogt said Monday.

By Monday afternoon, the storm had dropped 27 inches of snow in rural Delanson, New York, 25 miles (40 kilometers) northwest of Albany — the highest snow total in the Northeast so far. Forecasters predict accumulations near 30 inches by Tuesday morning in parts of Vermont's Green Mountains.

"We're tough, we've seen it all, we can handle it all," Cuomo said at a storm briefing before urging people to stay off the roads. He told nonessential state employees to stay home.

>>WHAT IS A BOMB CYCLONE?

But some workers had no choice but to trudge through knee-high snow and brush off their cars before heading out on the slushy roads.

"I just hate driving in snow," Kaia Jansson said as she raked snow off her car in Albany. "It's always a mess and it's cold and not fun."

In New Jersey, Gov. Phil Murphy said Monday at a news conference that the worst was still ahead. He closed state government for nonessential workers at noon.

Only 3 inches of snow was forecast for New York City, where schools were expected to remain open, and 5 inches for Philadelphia.

The storm also caused major traffic disruptions. Tractor-trailers were banned or lower speed limits put in place on stretches of highway in New Jersey and Pennsylvania.

A snowstorm moved across the New York area on Monday. Parts of upstate New York are under state of emergency. Officials in Westchester County said they were prepared. Reported by Antwan Lewis

New York, where a bus carrying about 30 people collided with a tractor-trailer late Monday, also posted lower speed limits on some highways.

Cuomo said there were some injuries in the crash but that they don't appear to be life-threatening.

Many buses from New York City to Pennsylvania and upstate destinations such as Ithaca and Binghamton were canceled.