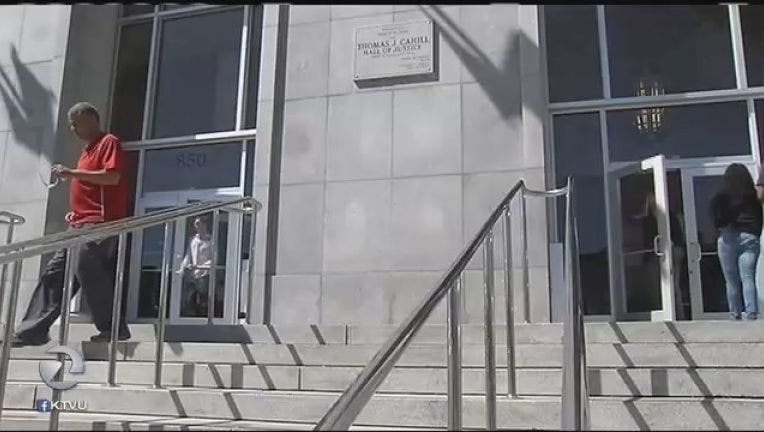 SAN FRANCISCO - The San Francisco Public Defender on Thursday lashed out at ICE, criticizing federal agents for arresting a San Francisco man as he was on the courthouse steps on his way to a criminal hearing.

In a statement, Mano Raju said the Election Day arrest was conducted without a judicial warrant and "therefore in violation of state law."

In an email, Raju's spokeswoman said the man, whom the public defender is not identifying, was taken into custody on a civil immigration violation and is currently being held in ICE detention in California. Raju's office would not comment on why the man was in court on Tuesday.

Jonathan Moor, an ICE spokesman, sent KTVU a statement saying that the man had three felony convictions for second-degree burglary from 2016, 2017 and 2018. ICE lodged a a detainer on the man in 2018, which was "not honored." ICE said the man was arrested by local law enforcement a total of seven times in the past five years, and at least eight detainers have been requested following those arrests.

ICE also did not identify the man.

California has declared declared itself a sanctuary state, and San Francisco a sanctuary city, safe havens where local officials will not cooperate with ICE if the person has committed a misdemeanor or a crime that isn't violent.  However, ICE argued that sanctuary law "cannot and will not govern the conduct of federal officers" acting according to Congressional law, which allows the removal of undocumented immigrants. However, ICE did not specifiy if the man's convictions were felonies or misdemeanors. Second-degree burglary can be charged as either.

Raju and District Attorney Chesa Boudin are both calling on ICE to stop making courthouse arrests, saying this was the first time this type of courthouse immigration enforcement has occurred in San Francisco.

Raju added this type of action unnecessarily "scares people—including victims, witnesses, the accused, or those participating in treatment – and deters them from coming to court. San Francisco will not allow such egregious abuse of power to go unchecked; we will provide immediate and zealous representation to anyone subject to such illegal activity.”

ICE San Francisco Field Office Director David Jennings countered in a statement provided to KTVU that "for many years, the city and county of San Francisco has refused to cooperate with ICE, much to their own detriment. Criminals like this individual are released to offend again and again. A simple phone call to ICE to arrange the secure transfer of such individuals would serve the hard-working residents of the city far more than a misguided sanctuary policy, that, as proven here and numerous times in the past, goes to great lengths to protect criminals under the guise of protecting the citizenry."

There will be a joint press conference with the San Francisco Public Defender’s Office and community organizations on Monday at noon on the steps of 850 Bryant Street.