Hurricane Sally has shifted east, which poses a big threat to Mississippi and Alabama. Authorities in Florida and Louisiana are also on high alert.

NEW YORK - Less than three weeks after Hurricane Laura made landfall, people living in the Gulf Coast are once again facing the threat of a dangerous storm. They are making last-minute preparations ahead of Hurricane Sally's arrival, filling sandbags and gas tanks. The storm prepares to make landfall near the Alabama-Mississippi border.

The storm is moving slowly, which means a prolonged period of heavy rainfall for the central Gulf Coast. Flooding has already begun in areas outside of New Orleans in Louisiana. And the tidal surge was seen pushing water onto roadways, lawns, and docks in parts of coastal Mississippi.

"It is still anticipated that we are going to bear the brunt of this storm, it is possible that over the next several hours that things will change," Mississippi Gov. Tate Reeves said.

Mississippi officials warned that Hurricane Sally was expected to coincide with high tide, leading to a significant storm surge.

Sally has shifted east and now has the residents of Alabama on high alert.

"Folks with any tropical storm, the only thing you can predict is that things will change hour by hour," Alabama Gov. Kay Ivey said. 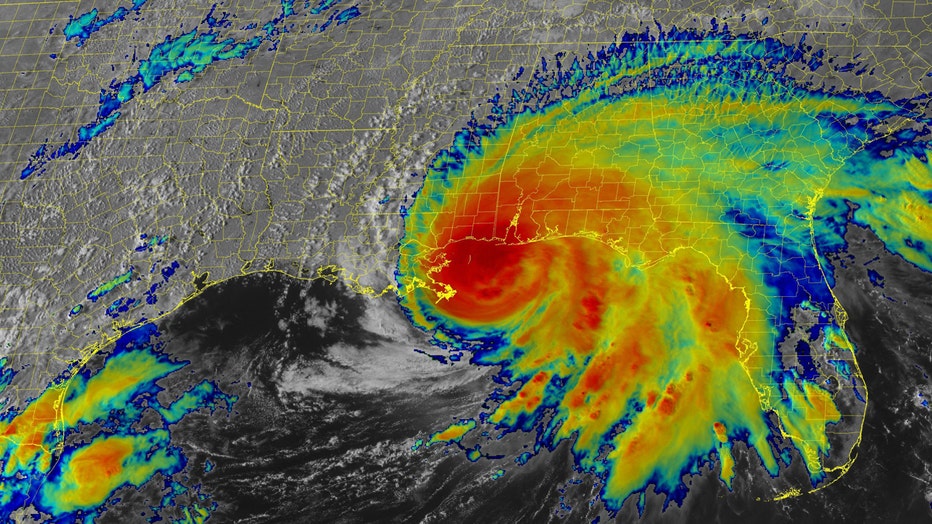 Wave heights are increasing as Sally makes its approach to land. Storm surge will be a major threat from southeast Louisiana, across the coasts of Mississippi and Alabama, to the panhandle of Florida. In addition, over a foot of rainfall is expected resulting in flash flooding.

Nearly 90% of tropical cyclone deaths are because of flooding and storm surge. Sally brings both of these threats with 10 to 20 inches of rainfall expected and a storm surge of up to seven feet. Despite the warnings, some say they're planning to ride out the storm.

What happens if we run out of hurricane names?

The National Hurricane Center is warning people to stay off roads before waters get too deep.

"Travel's going to be absolutely treacherous. Turn around, don't drown is what we always try to say," National Hurricane Center Director Ken Graham said. "It's going to be very dangerous on the roads, rivers, creeks."

This hurricane season is continuing its record-breaking streak. Hurricane Sally is one of five named storms currently in the Atlantic basin. The last time that happened was in September 1971.

This hurricane season is continuing its record-breaking streak. Hurricane Sally is one of five named storms currently in the Atlantic basin. The last time that happened was in September 1971.