Hurricane Laura has officially made landfall as a category 4 storm on the Louisiana coast.

HOUSTON - Hurricane Laura made landfall over southwestern Louisiana around 1 a.m. Thursday. The Category 4 hurricane made it over Cameron Parish with winds still at 150 mph.

The National Hurricane Center is urging residents near the storm to "take action now to protect your life!"

The safest place to be during a major landfalling hurricane is in a reinforced interior room away from windows.

Unsurvivable storm surge and hurricane-force winds are expected. The "extremely dangerous" Category 4 hurricane is just 40 miles away from Port Arthur.

As of 1 a.m., Hurricane Laura is located about 40 miles east of Port Arthur, Texas and 35 miles south-southwest of Lake Charles, Louisiana.

The National Weather Service said water levels were beginning to rise along the coast of Louisiana.

Lafourche Parish, which is just south of New Orleans, in west Louisiana has already seen high water levels. The Sheriff's Office posted several images on Facebook from throughout the area.

Deadly storm surge with large and destructive waves will cause catastrophic damage from Sea Rim State Park, Texas, to Intracoastal City, Louisiana, including Calcasieu and Sabine Lakes, is forecast by the NHC.

This surge could penetrate up to 40 miles inland from the immediate coastline, and floodwaters will not fully recede for several days after the storm. 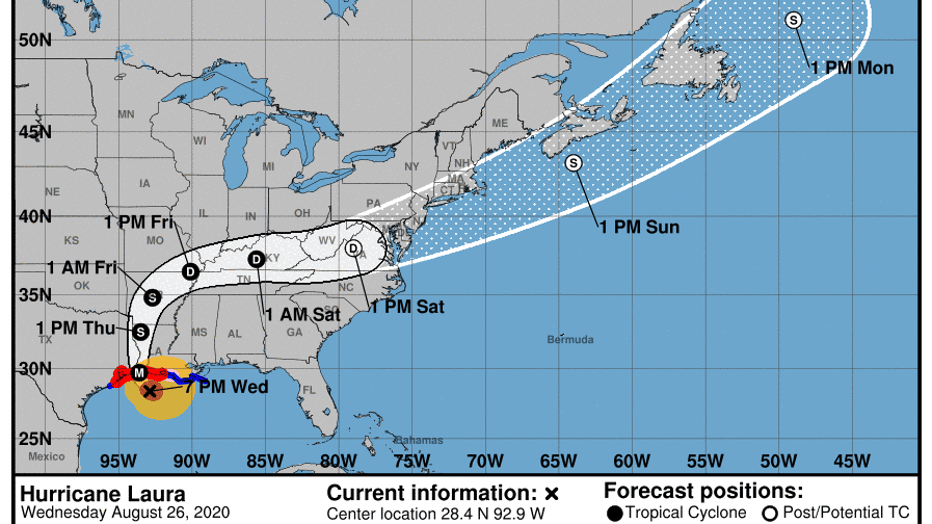 Several weather alerts have been issued along the central Gulf Coast.

A Storm Surge Warning is in effect for:

- Freeport, Texas to the Mouth of the Mississippi River

A Storm Surge Warning means there is a danger of life-threatening inundation, from rising water moving inland from the coastline in the indicated locations. 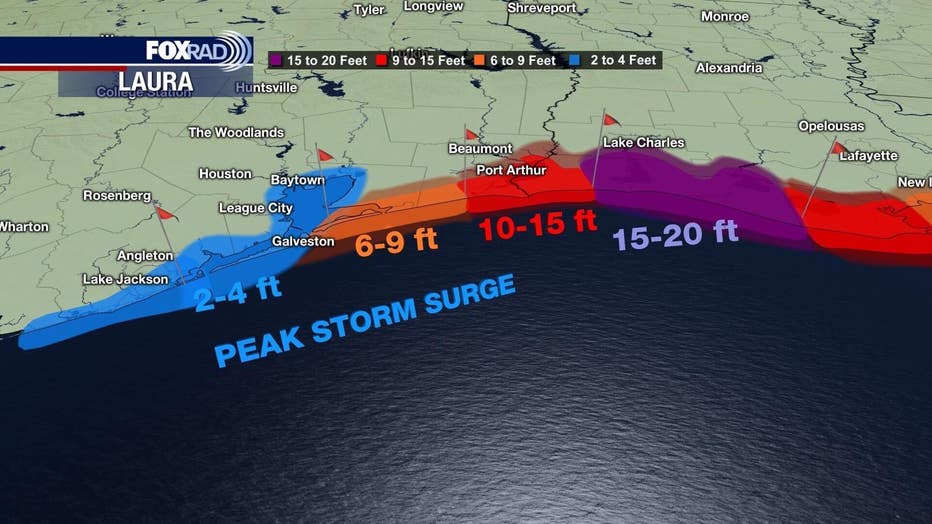 A Hurricane Warning is in effect for:

A Hurricane Warning means that hurricane conditions are expected somewhere within the warning area. Preparations to protect life and property should be rushed to completion.

A Tropical Storm Warning is in effect for:

- East of Intracoastal City, Louisiana to the Mouth of the Mississippi River

A Tropical Storm Warning means that tropical storm conditions are expected somewhere within the warning area.

A Hurricane Watch is in effect for:

- East of Intracoastal City to west of Morgan City, Louisiana

A Hurricane Watch means that hurricane conditions are possible within the watch area.

Mayor Turner urges the city of Houston to stop driving on roads by 8 p.m. Wednesday

Houston Mayor Sylvester Turner is urging the city to get off the roads by 8 p.m. Wednesday ahead of Hurricane Laura 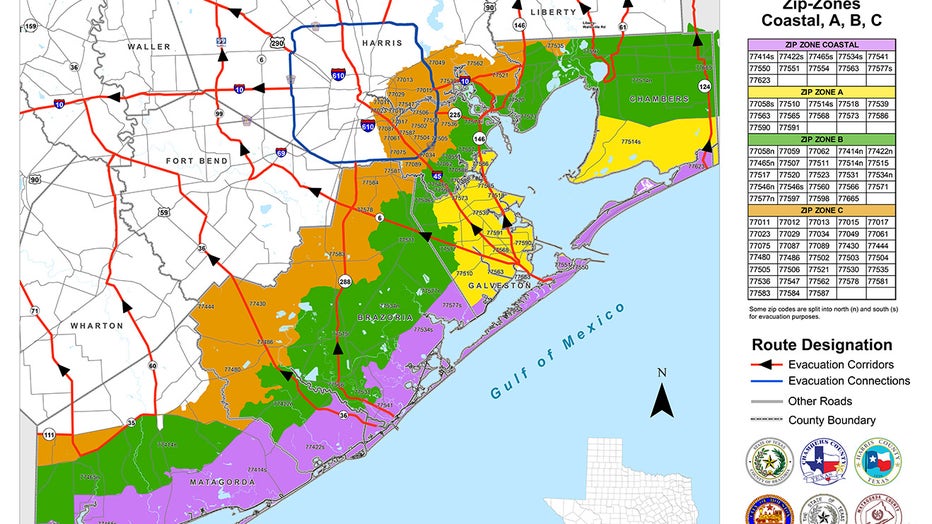 As Laura continues to pose a major threat to the Texas Gulf Coast, some counties and cities have issued mandatory and voluntary evacuations.

Chambers County, parts of Galveston County, and Jefferson County are among those with mandatory evacuations.

On Wednesday evening, TXDoT closed I-10 east and westbound in Lake Charles due to Hurricane Laura. An alternate route has been set from Interstate 35 to Interstate 20.

Harris County Judge issues voluntary evacuation in Zones A and B

Harris County Judge Lina Hidalgo has declared a voluntary evacuation for residents in evacuation Zones A and B, which include coastal communities in the county.

In response to Hurricane Laura, several schools and businesses in southeast Texas have closed, canceled, or made changes as a precaution.

Some school districts are opting to continue with virtual or remote learning, while others are canceling classes and closing campuses. FOX 26 has compiled an alphabetically ordered list of districts that are closing or making changes.

City offices, museums and health clinics are also closing due to the storm. Transportation like METRO and the Galveston-Bolivar Peninsula Ferry have been suspended. FOX 26 has compiled an alphabetically ordered list of businesses that are closing or making changes.

The FOX 26 Weather Team is closely monitoring developments. They will continue to keep you up-to-date online, on-air, and on social media.

You can also stay up-to-date 24 hours a day by downloading the free FOX 26 weather app. You'll receive weather alerts for your location, along with video weather updates.