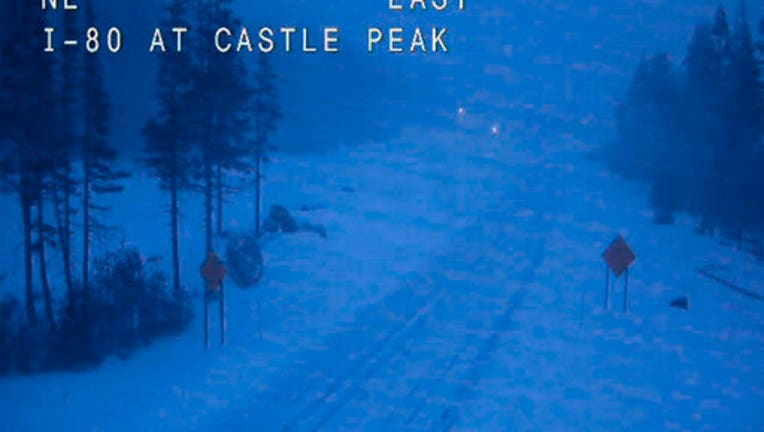 In this still image taken from a Caltrans remote video traffic camera, eastbound Interstate 80 is empty because of closures and restrictions in Soda Springs, Calif., Wednesday, Nov. 27, 2019. Blizzard conditions have closed Interstate 5 south of Ashl

CALIFORNIA - PORTLAND, Ore. (AP) — Hundreds of cars remained stranded Wednesday on Interstate 5 headed north from California into Oregon in the aftermath of a major storm that dumped snow and created white-out conditions on both sides of the California-Oregon border.

The stranded cars made it difficult for plows to clear the freeway, which was closed in both directions late Tuesday because of the storm.

As the skies cleared Wednesday, drivers reported being stuck for 17 or more hours in blizzard conditions and some spent the night in their vehicles.

Locals helped others by driving them to look for a place to sleep in Redding, where snow was already melting Wednesday, said Redding Police Cpl. Will Williams.

Travel was particularly perilous over the Siskiyou Summit, one of the more treacherous mountain passes, and just south of the Oregon-California state line.

“There is a large number of spun out vehicles, large trucks and smaller cars, along the road that didn’t put chains in their tires as required,” Denise Yergenson, a Caltrans spokeswoman said. “That blocked the road and it’s hampering our ability to plow.”

Anderson said Caltrans and many other agencies worked hard to communicate the seriousness of the storm but that many drivers were still caught by surprise.

“You must use your chains when directed to do so. Of all the trucks and vehicles that spun out nearly all did not put on their chains as they were required to do,” he said in a statement.

Portland, Oregon resident Christina Williams and her 13-year-old son were some of the lucky ones who made it through the storm, but not without plenty of scary moments. They were driving from Oregon to the San Francisco area for Thanksgiving when they first hit snow around Roseburg, Oregon.

Williams said it took them more than 17 hours to reach Redding, California, where they got a hotel room. Conditions were so treacherous, she said, that she was afraid to try to exit the freeway because it was so slippery.

Cars all around them were getting stranded and ice formed on her windshield even while the car was on.

At the peak of the storm, Pacific Power said 19,000 customers were without power in Northern California and Southern Oregon. As of late Wednesday morning the company said that number was down to about 1,700.

That number had dropped to several thousand, mostly in northern California, by Wednesday.

The storm — called a “bomb cyclone” — came ashore near Brookings, Oregon late Tuesday afternoon packing heavy snow and winds gusting up to 106 mph (170 kmh) in some coastal areas. A bomb cyclone forms when air pressure drops 24 millibars or more in a 24-hour period. They are rare in the U.S. West and this storm’s pressure dropped even more precipitously than expected, leading forecasters to say it was one of the worst such storms in the past 15 to 20 years.

Central Oregon also got hit with snow and Oregon State University closed its Bend campus due to weather conditions.