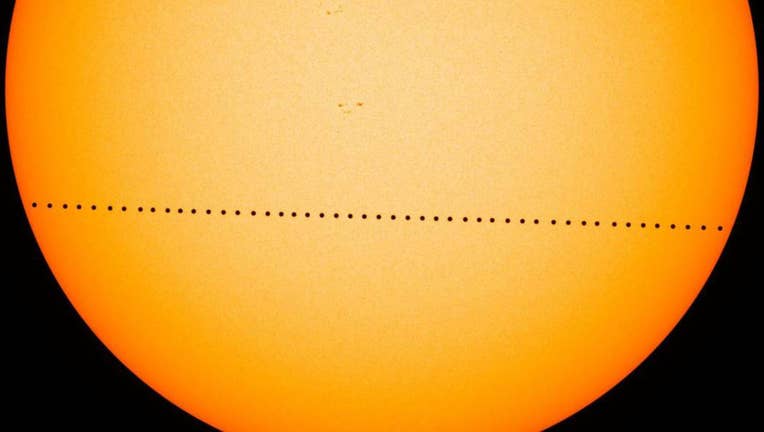 The black dot of Mercury crosses the sun's disk in a composite image made during the last Mercury transit in 2016. Photo via NASA.

LOS ANGELES - Astronomers and sky watchers will be ready for a rare celestial event taking place Monday, November 11th. That's when Mercury, our innermost planet, passes directly between Earth and the sun.

This event only happens 13 times every 100 years. These transits are so rare because of Mercury's unusual orbit and how it meshes with Earth's orbit. Mercury's distance from the sun can vary quite a bit, and its orbit has an incline of 7 degrees compared to Earth's orbit. That makes it hard to get the three celestial objects to line up.

The last transit took place in 2016, and the next one won't happen until 2032. Those in the United States though will have to wait even longer when the next Mercury transit occurs in 2049.

The only two planets we can see transitting the sun are Mercury and Venus, since their orbits are inside Earth's orbit. The last Venus transit was in 2012, and the next one won't be until 2117. 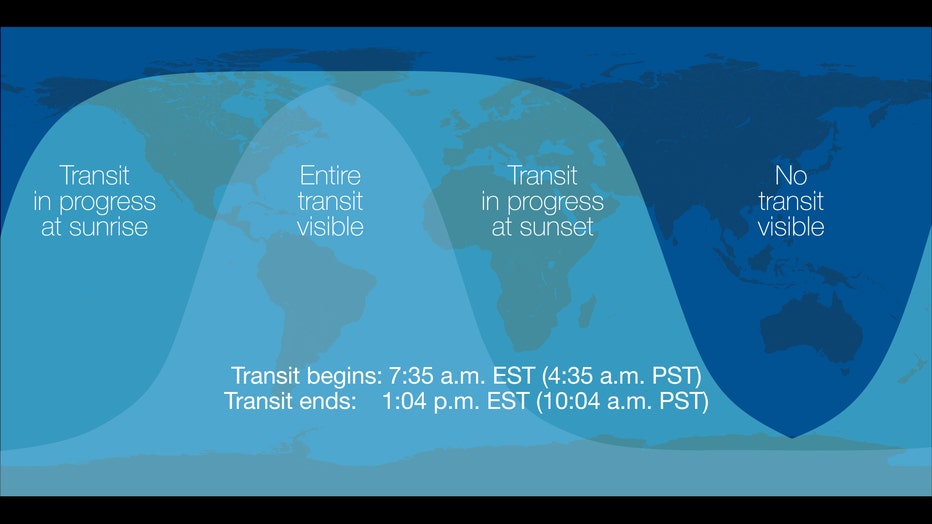 This map shows where and when the transit will be visible on November 11. Image credit: NASA/JPL-Caltech

When Mercury transits, it will appear as a tiny black dot against the sun.

One fascinating observation of any transit is the "black drop effect", an optical illusion that happens when the planet either just enters or starts to leave the sun’s disk. When Mercury’s leading edge first touches the sun, the planet will appear to grow a narrow neck connecting it to the edge of the sun, making the silhouette look like a teardrop. This strange apparition happens again just as Mercury becomes engulfed by the sun’s disk. 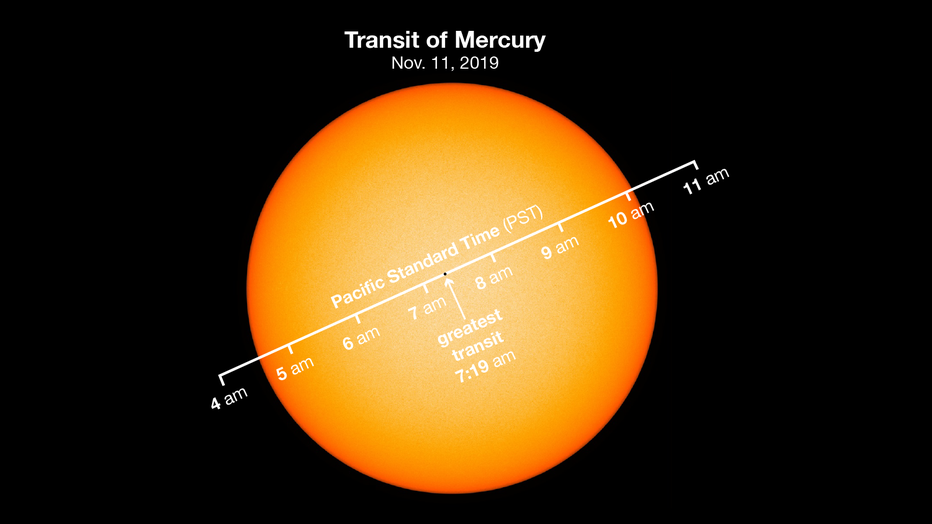 "Because Mercury is so small from our perspective on Earth, you'll need binoculars or a telescope with a Sun filter to see it," NASA wrote on it's website.

To save your eyes from potential blindness, the best way to view the Mercury transit is to use a telescope with a compatible solar filter.

And let's all hope for clear skies, too.

Since Monday is a holiday (Veteran's Day), Griffith Observatory in Los Angeles will not have a public event, but you can view the transit live online through Griffith Observatory's live stream. The Virtual Telescope Project will also host an online viewing event, and astrononmy streaming service Slooh will provide a live stream on YouTube.