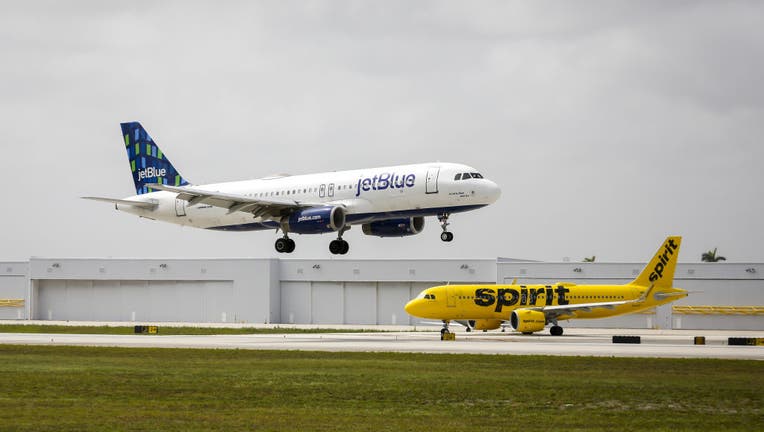 Fares across the airline industry could potentially increase now that JetBlue Airways has nabbed Spirit Airlines, the country's largest budget carrier, according to an industry expert.

JetBlue and Spirit said in a joint announcement Thursday that the deal will drive down fares for all four major U.S. airlines that dominate the industry: American Airlines, Delta, Southwest and United.

However, Jim Corridore, senior insights manager at Similarweb, which generates insights on the travel sector, says the newly announced deal could actually hinder the cheap-fare end of the industry by knocking out a major price disrupter.

JETBLUE WILL NOT BACK DOWN, CONTINUES ITS FIGHT FOR SPIRIT AIRLINES

The deal with JetBlue – which operates like the four giants that dominate the U.S. airline business – will likely eliminate industry price disrupter Spirit from the marketplace — ultimately driving prices higher across the board for consumers, he added.

Comparatively, if Spirit shareholders chose Frontier, another discount carrier with a similar operating model, it would have created more competition against rivals and potentially simulated price downward, according to Corridore.

Although the number of seats available for travel will unlikely change much, "the strategy around how to price those seats would change," Corridore said.

Competing airlines will no longer be forced to match Spirit's low fares. As a result "the industry will see overall fares rise somewhat," he said.

Overall, the fare environment – which has already been rising due to supply-demand imbalance and rising input costs – may become a little more difficult for travelers. However, most airlines will still only charge as much as the market will allow, Corridore added.

Corridore also doesn't expect regulators to block the deal either because of the number of remaining competitors and the small market share of the combined airlines.

"We will have to see how harshly regulators look over the merger and if they try to block it or make JetBlue sell routes," he said. "Overall, we don't think the level of market share is enough to have the deal blocked."

Things you must do if you're flying

Brian Kelly, Founder of The Points Guy, shares the tips you must follow if you are traveling by air.

When combined, JetBlue and Spirit would only have a 12% market share as measured by Similarweb data on web traffic. The New York-based airline still lags behind Southwest, American, Delta and United, all of which have a higher share of web traffic, Corridore said.

"Spirit and JetBlue will continue to advance our shared goal of disrupting the industry to bring down fares from the Big Four airlines," Hayes said.

Likewise, Spirit CEO Ted Christie called the deal a "game changer" and said the airlines have agreed to "create the most compelling national low-fare challenger to the dominant U.S. carriers."

Christie said the company is confident in JetBlue to deliver "low fares and award-winning service."