ATLANTA - Things did not look so good for the Houston Astros during their first night in Atlanta, with the Braves taking a slim lead and clinging on to it in Game 3 of the World Series.

Sadly, they were unable to turn things around during Game 4 and fell to the Braves, 3-2.

FULL RECAP: Astros unable to catch up after slim lead in Game 3 against Braves, 2-0

The loudest noise when Jose Altuve, Carlos Correa, and Alex Bregman stepped to the plate came from the crowd, not their bats.

Greeted by chants of "Cheater!" all night, the Astros stars went almost silent in Game 3 of the World Series.

Forget any worries that Houston’s lineup would be depleted without a designated hitter in the National League park. The greater concern for the Astros: When will their big hitters break loose?

FOX 26’s Coco Dominguez is at Minute Maid park with loyal Astros fans who remain optimistic that things will turn around in the World Series and the odds will be in their favor.

Because the sight of Altuve flipping his bat after yet another strikeout clearly wasn’t part of this postseason plan.

World Series watch parties at Minute Maid Park: How to get a voucher

Held hitless until the eighth inning, Houston finished with two mere singles Friday night in a 2-0 loss to the Atlanta Braves and fell behind two games to one.

"I think we didn’t swing it for one game. I think we flush it and move on to the next day and have a short memory. You have to in this game," Bregman said.

The Braves were 42-38 in home games in 2021. Atlanta has hit 16 home runs this postseason, Freddie Freeman has accounted for three of them en route to posting a slugging percentage of .533.

How it feels to be surrounded by Braves fans

FOX 26's Gabby Hart shows us how hospitable Braves fans while they were in the lion's den during a disappointing outcome in Game 3 of the World Series in Atlanta.

The Astros posted a record of 44-37 away from home in 2021. Houston has hit 14 home runs this postseason, Jose Altuve has accounted for four of them en route to posting a slugging percentage of .472.

The Braves won the last meeting 2-0. Ian Anderson earned his second victory this postseason and Travis d’Arnaud went 2-for-4 with a double, a home run and an RBI for Atlanta. Luis Garcia registered his second loss of the postseason for Houston.

He was replaced by Garrett Stubbs.

Castro was placed on the COVID-19 related injured list. Unlike a player replaced due to injury, Castro is eligible to return if he is cleared.

Jose Altuve kicked off the first inning, swings, and grounds one into the hall, reaching infield single to third. This is a stark contrast to Friday night's game. Up next was Michael Brantley against Dylan Lee, pitching for the Braves. Brantley walks, moving Altuve to second. Bregman comes up next., who strikes out after a 3-2 pitch.  Yordan Alvarez steps up to the plate but walks, with Correa coming up. Brantley moves to second, Altuve to third, bases are loaded. Kyle Wright swaps in for Lee against Correa, who grounds out to third, Altuve scores, moving Alvarez to second, Brantley to third. Astros take early lead 1-0. Kyle Tucker comes up to follow but is struck out swinging. 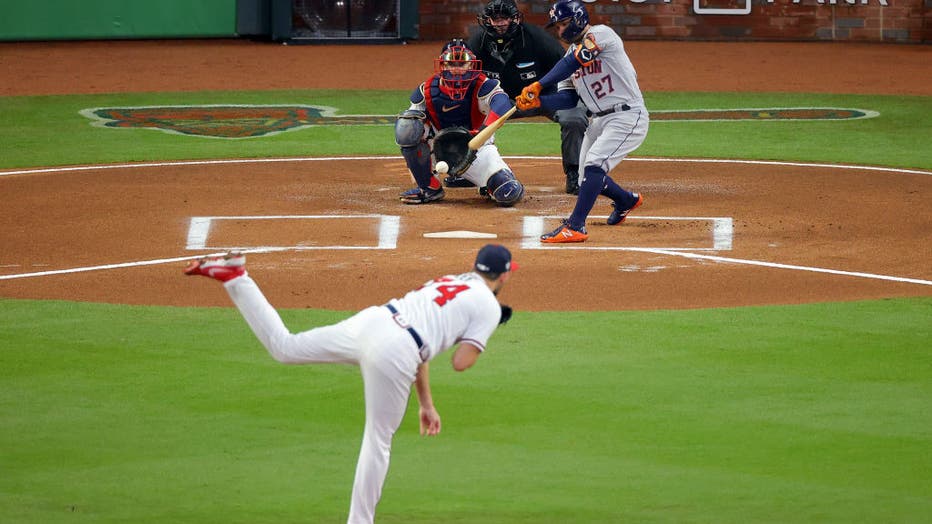 ATLANTA, GEORGIA - OCTOBER 30: Jose Altuve #27 of the Houston Astros hits a single against Dylan Lee #74 of the Atlanta Braves during the first inning in Game Four of the World Series at Truist Park on October 30, 2021 in Atlanta, Georgia. (Photo by

Zack Greinke pitches to Eddie Rosario to kick off the bottom of the first and lines out to center, but it's an easy play by Kyle Tucker. Up next is Freddie Freeman, who dumps the base hit into center and bounces in front of Tucker. Ozzie Albies follows up next for the Braves, who after hitting a foul ball is struck out swinging. Austin Riley up next lines one out to center. Astros maintain the early lead.

Yuli Gurriel starts off the second inning by grounding out to first. Greinke up next and grounds one up to the middle, singling out to center. Martin Maldonado follows up next and singles to the right, moving Greinke to second. Altuve hits one in the air, lining up to third. Brantley then steps up to the plate, grounds out to second. Houston clings to its early lead as we go into the bottom of the 2nd inning. Joc Pederson grounds out to shortstop, followed by Travis d'Arnaud, who is struck out looking. Next up is Duvall, and he singles out to left after swinging at a 3-0. Dansby Swanson, next at-bat, lines out to left but carries to Alvarez. 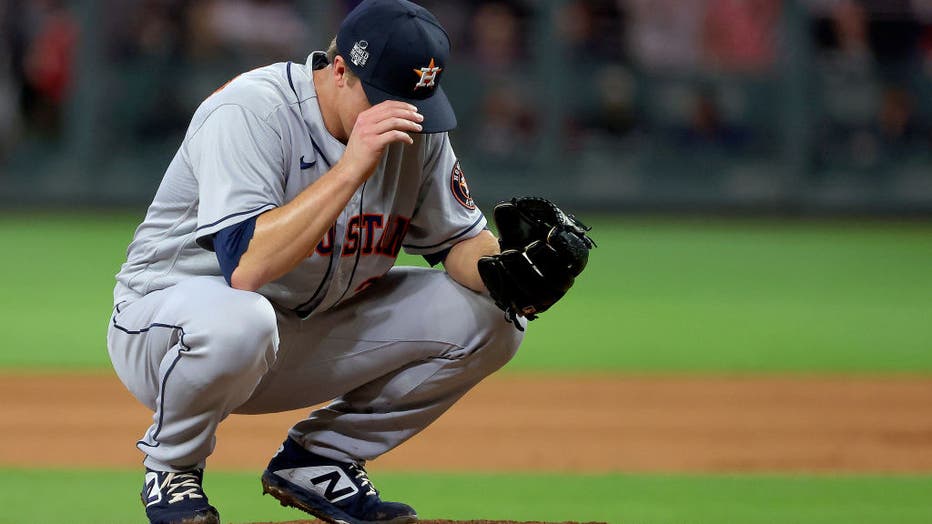 ATLANTA, GEORGIA - OCTOBER 30: Zack Greinke #21 of the Houston Astros reacts against the Atlanta Braves during the second inning in Game Four of the World Series at Truist Park on October 30, 2021 in Atlanta, Georgia. (Photo by Kevin C. Cox/Getty Ima

Bregman is due up to bat for the Astros against Wright. He flies one out to second, but Albies goes out to get it. Next is Alvarez, who after a 3-2 pitch walks. Correa steps up to the plate next, singles to left-center, moving Alvarez to second. Tucker follows and after a 3-0 pitch, rounds one out to right, grounded into fielder's choice to second, moving Correa out at second, and Alvarez to third. Gurriel is up next but is swapped in for Greinke, who grounds out to second. Wright strikes out swinging at the start of the bottom of the third. Rosario follows, singling out to the center. Freeman up next, and grounds into a double play, second to shortstop to first, moving Rosario out to second. 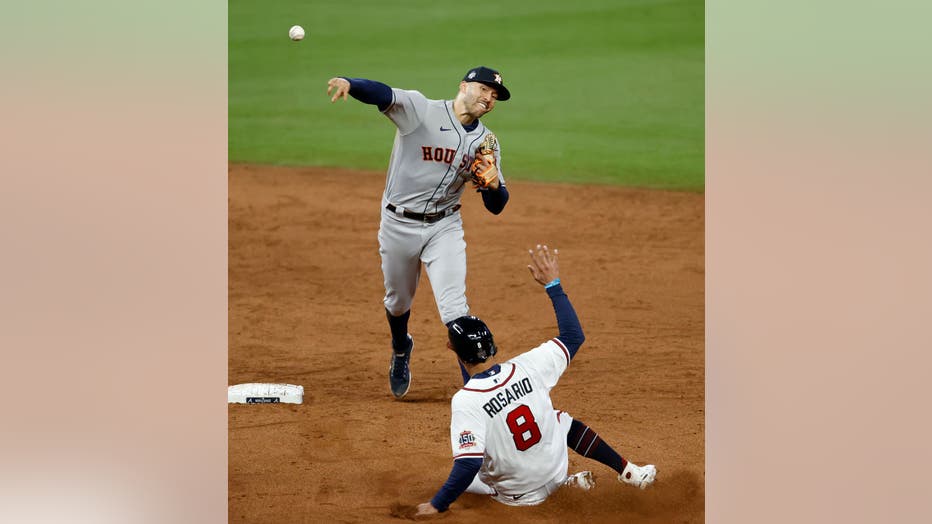 ATLANTA, GEORGIA - OCTOBER 30: Carlos Correa #1 of the Houston Astros turns a double play against Eddie Rosario #8 of the Atlanta Braves during the third inning in Game Four of the World Series at Truist Park on October 30, 2021 in Atlanta, Georgia.

Maldonado grounds out to shortstop to start off the fourth inning against Wright. Next up is Altuve, who flies one out to the wall and homers out to the center. Astros are now up 2-0 as Brantley steps up to the plate. He grounds out to first, but then it's Bregman, who strikes out swinging. Concluding the top of the fourth, but Astros keep their lead.

Greinke pitches to Albies at the bottom of the fourth. He grounds out to shortstop before Correa follows the hit. Riley up next at-bat, who after a 3-2 pitch does a base hit, singles out to center. Pederson grounds into a double play, second to shortstop to first, moving Riley out to second.

Alvarez strikes out swinging at the top of the fifth inning. Correa grounded out to shortstop. Kyle Tucker up next, singles out to center, past Albies but caught by Duvall. He then steals second, making him safe at third after a throwing error by d'Arnaud. Gurriel follows next with an intentional walk. Marwin Gonzalez is swapped in to hit for Greinke. He flies one out to left but Rosario follows it. 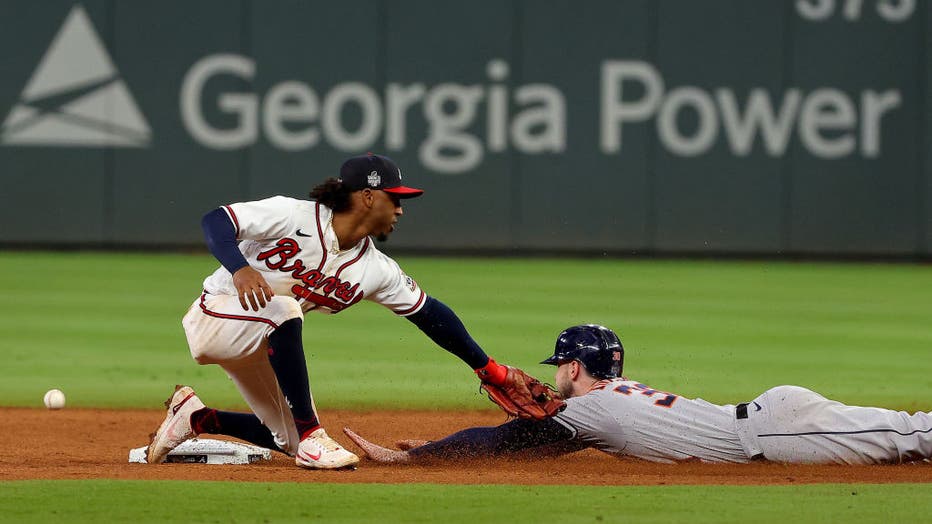 ATLANTA, GEORGIA - OCTOBER 30: Kyle Tucker #30 of the Houston Astros steals second base and advances to third on a throwing error against Ozzie Albies #1 of the Atlanta Braves during the fifth inning in Game Four of the World Series at Truist Park on

Ryne Stanek pitches to d'Arnaud at the bottom of the fifth, and he grounds out to second. Next up is Duvall, flies one out to left. Swanson follows with a high fly ball to the left but it is caught by Alvarez and is ultimately struck out looking. Houston hangs on to its 2-0 lead.

Maldonado begins the sixth inning by lining out to second, but it's caught by Albies. Altuve up next but strikes out looking. Brantley follows at-bat and grounds one into the center. Bregman concludes the first half by grounding out into fielder's choice to shortstop, and Brantley out at second. Arcia hits for Martin while Brooks Raley pitches for the Astros and he lines one out to right. Rosario hits one to the right and doubles. Freeman walked and Albies steps up at-bat, but not before a switch, where Phil Maton subs in for Raley. Albies is struck out swinging and Riley comes up to bat. He shoots one into left, Alvarez plays it on a bounce and advances but it's too late as it's called safe. Rosario scores, moving Riley to second, Freeman to third. Astros still up, 2-1. d'Arnaud stands in for Pederson to bat and is struck out looking. Inning concludes with Astros remaining on top, 2-1. 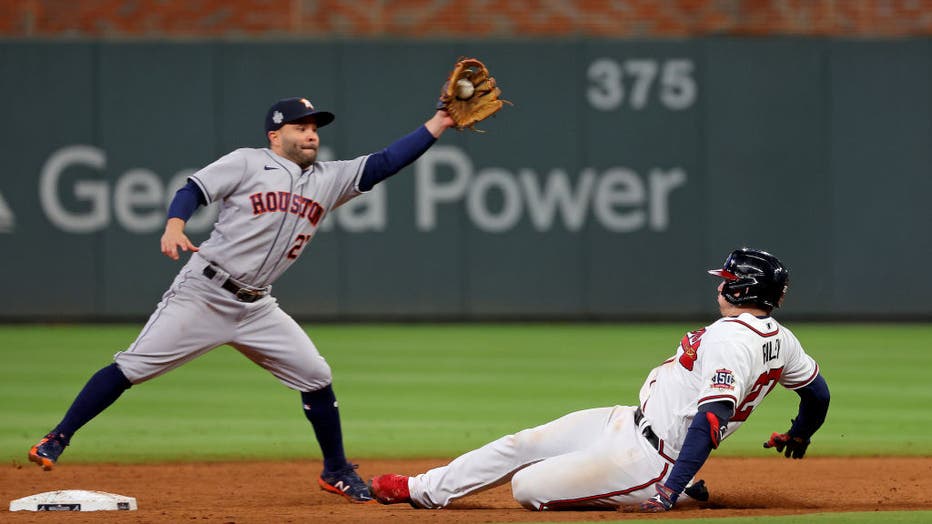 ATLANTA, GEORGIA - OCTOBER 30: Austin Riley #27 of the Atlanta Braves slides in safely under the tag of Jose Altuve #27 of the Houston Astros at second base after advancing on the throw after hitting an RBI single during the sixth inning in Game Four

Alvarez starts off the seventh inning at-bat and grounded out to shortstop while Tyler Maztek pitches for the Braves. Correa next up grounds out to third. Next up is Tucker, who singles out to left. From there, Gurriel is brought out and flys a high ball out to the right but it's caught out. Duvall is due up next with Cristian Javier to pitch for the Astros as we go into the 7th inning stretch. He strikes out swinging and Swanson homers to the right and evens the scores 2-2. Soler up to bat next, subbing in for Maztek, hits a solo homer out to left. Pressley pitches, swapping him in for Javier, and strikes out Rosario and Freeman. The score is now, 3-2, Braves. 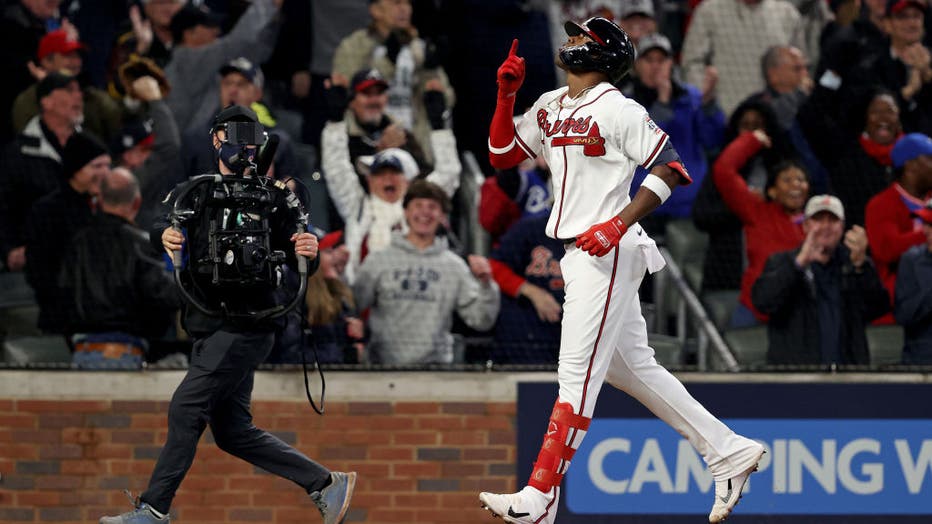 ATLANTA, GEORGIA - OCTOBER 30: Jorge Soler #12 of the Atlanta Braves celebrates after hitting a solo home run against the Houston Astros during the seventh inning in Game Four of the World Series at Truist Park on October 30, 2021 in Atlanta, Georgia

Aledmys Diaz kicks off the top of the eighth against Luke Jackson, of the Braves. After a 3-2 pitch, he lines out to left and it's caught by Rosario. Maldonado is on deck but then is struck out swinging. Altuve flies out to left but the ball is caught once again by Rosario. Astros are unable to pick things up. Pressley now pitching for the Astros while Albies is at-bat, walks. Riley up next and strikes out swinging. Pederson up next is hit by a pitch, Albies moves to second and d'Arnaud steps up to the plate. He is struck out swinging and it's Duvall to close out the eighth and he's fouled out to third by Bregman. 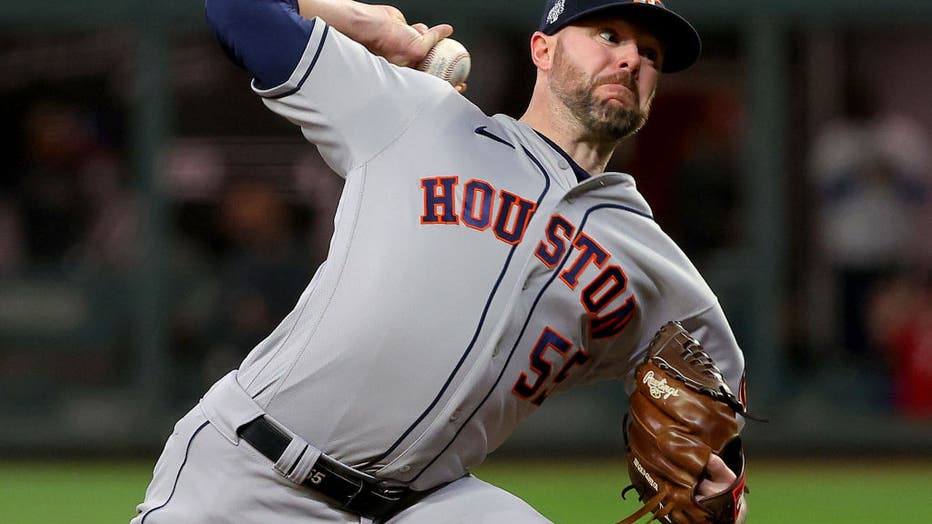 ATLANTA, GEORGIA - OCTOBER 30: Ryan Pressly #55 of the Houston Astros delivers the pitch against the Atlanta Braves during the eighth inning in Game Four of the World Series at Truist Park on October 30, 2021 in Atlanta, Georgia. (Photo by Kevin C. C

Will Smith pitches in for Atlanta and Brantley is at-bat. The hope is to turn things around during this inning but he is struck out looking. Bregman up next, who pops it off to second but is caught by Albies. Alvarez follows and it's the last opportunity for Houston but it's to no avail. Braves take the win in Game 4, 3-2.