House Speaker Nancy Pelosi is reportedly crafting a bill that would bring $750 billion in aid to states and local governments.

WASHINGTON (AP) - A new coronavirus aid package released Tuesday by House Democrats includes $25 billion for the cash-strapped U.S. Postal Service, which could run out of money by the end of September without a taxpayer bailout. Mail volume is down by more than 30% from last year because of the pandemic, and the Postal Service says losses will increase by more than $22 billion over the next 18 months.

The bill also would repeal several restrictions on a $10 billion line of credit for the Postal Service authorized in a previous economic rescue law.

The House is expected to vote on the package as soon as Friday, but Senate Majority Leader Mitch McConnell has said there is no “urgency" for the Republican-controlled Senate to act.

President Donald Trump has publicly threatened to block the $10 billion loan unless the Postal Service significantly raises rates for packages delivered for Amazon and other big shippers. Trump has complained for years that the Postal Service was being exploited by Amazon and other shippers, but Democrats say his real target is Amazon CEO Jeff Bezos, who owns The Washington Post. Trump has feuded with what he's termed the "Amazon Washington Post" and other news organizations that have reported unfavorable developments during his campaign and presidency. 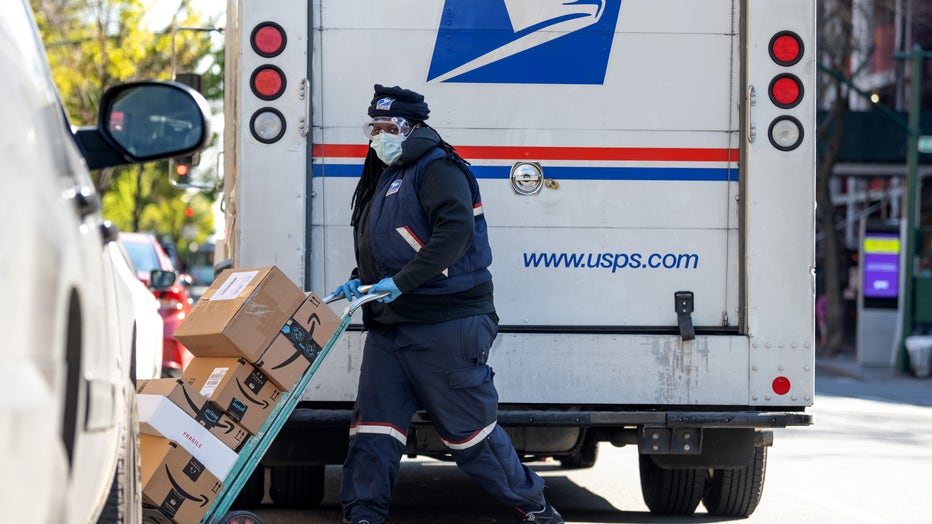 “He is willing to sacrifice the U.S. Postal Service and its 630,000 employees because of petty vindictiveness and personal retaliation against Jeff Bezos,’’ Connolly said of Trump. “That would be a tragic outcome.”

Connolly, who chairs a House subcommittee that oversees the Postal Service, said Trump's claim that the Postal Service loses money on package delivery is “utterly false.” Financial losses are due to a decade-long decline in mail volume and a federal law that requires the Postal Service to prepay pension benefits, Connolly and other lawmakers said. The financial woes have been exacerbated by the pandemic, which has pushed mail volume down by more than 30% from the same period last year.

RELATED: Health care workers are 10%-20% of US coronavirus cases

Lawmakers from both parties have defended the Postal Service, saying it is even more important during the COVID-19 crisis as millions of people receive relief checks through the mail, as well as prescription medicine, food and other crucial items.

“The United States Postal Service is not only constitutionally mandated but serves as a vital lifeline to countless Alaskans in rural communities. It is an institution that must be preserved,’’ said Rep. Don Young, R-Alaska.

In a letter last week, 30 Democratic senators said they were concerned at Trump’s repeated invocation of Bezos and Amazon as he threatens to withhold aid from the Postal Service. The comments “strongly suggest personal and political motivations on this matter,’’ the senators wrote, adding: “It would be highly inappropriate and unacceptable for the Department of Treasury to act on such motivations when considering the USPS loan or other USPS relief.”

The letter said raising prices on shipping companies or attempting to privatize the Postal Service, as some Republicans advocate, would lead to "increased prices for everyday consumers, as well as the huge numbers of businesses that depend on the mail service.''

RELATED: Can’t find hand sanitizer? The World Health Organization has a recipe to make your own

The conditions Trump and Treasury Secretary Steven Mnuchin seek to impose on the $10 billion loan "stand in stark contrast with the relative lack of strings placed on monies made available to corporations in recent relief efforts,'' the letter said.