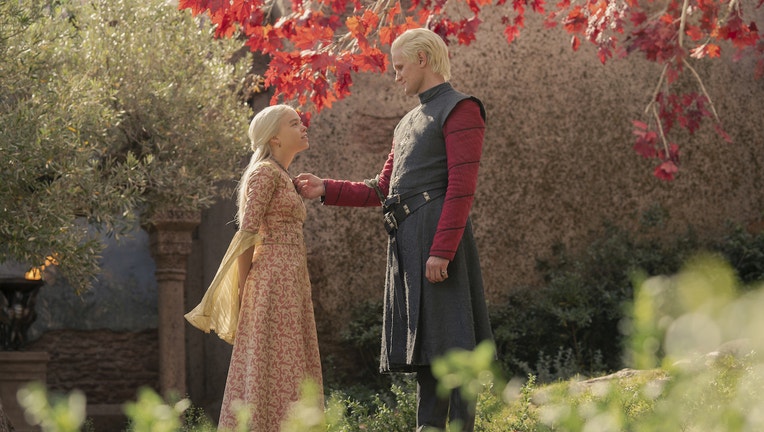 London, U.K. - Welcome to "House of the Dragon" recaps! In the fourth episode, "King of the Narrow Sea," Daemon returns to King’s Landing, things get hot and heavy during a debaucherous night on the Street of Silk and Alicent isn’t so thrilled to be the only responsible royal around. Here’s all the latest from Westeros. "House of the Dragon" is streaming via HBO Max; FOX Television Stations’ recaps will run weekly.

"King of the Narrow Sea" makes for a comparatively slow episode of "House of the Dragon," but one that’s fraught with incredibly important character detail. Princess Rhaenyra is her own person first and a Targaryen second, and the resulting tension isn’t always pretty — especially when it involves a scandalous night with her uncle.

The big news out of Westeros

Previous episodes have centered on duty and power, but this episode focuses on a simple question: What if for one night you let yourself forget about both?

Princess Rhaenyra (Milly Alcock) has grown more than a little frustrated with her father’s continued attempts to marry her off — understandable, given that it involves sending her out on a royal tour of city after city full of men of all ages waxing lyrical (or not) for her hand. It all comes to a head during an event at Storm's End, which she abandons, sailing back to King’s Landing to (almost) everyone’s obvious disappointment. 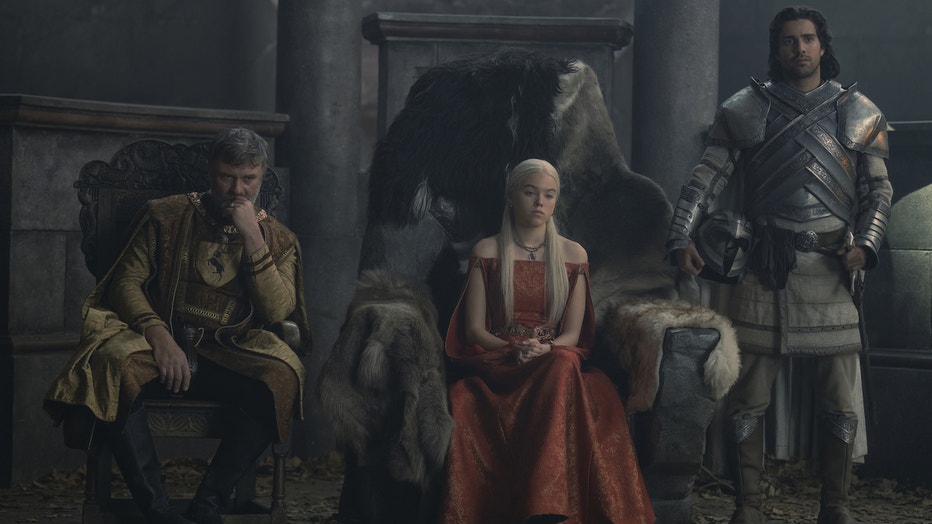 As Alicent Hightower (Emily Carey) points out, Rhaenyra has far more choices than most other ladies, and even princesses, in her situation. But looking at it from a modern point of view, it’s all but impossible not to empathize with Rhaenyra. When she’s invited to a secret night out with her wayward uncle Daemon (Matt Smith) — who it’s obvious to everyone, including him, that she has a crush on — it looks like she might finally be in for a night of fun. Yet while audiences are likely rooting for Rhaenyra, this particular kind of fun might not be what they hoped for, even if the charge between Daemon and Rhaenyra has been building all season.

WATCH FREE ON TUBI: "Fifty Shades of Grey" — get the app

In fact, "King of the Narrow Sea" ends with Rhaenyra at her wildest: indirectly insulting Alicent, who she has finally patched up a feud with; almost having sex with her uncle (depends on who you ask in King’s Landing as to whether they actually did the deed); then bedding her Kingsguard Ser Cristen Cole (Fabien Frankel). Maybe most shocking of all, she then quite convincingly lies about all these actions on her late mother’s grave.

We’ve already seen Rhaenyra cruel, as she laughs at a poor boy who is trying to live up to his parents’ expectations, and now we’re seeing her entitlement and recklessness. She’s not a perfect princess, and she doesn’t want to be. It’s kind of great. 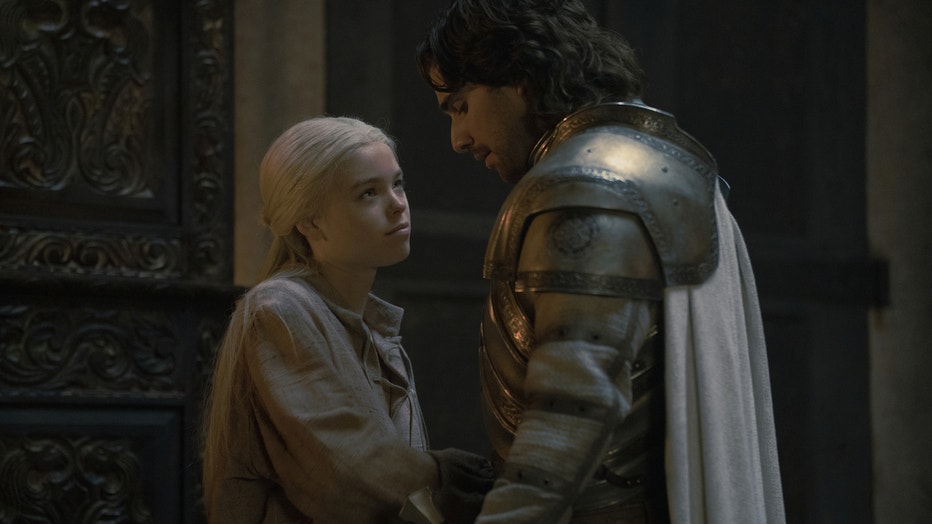 Also: Otto Hightower’s reign is over

Rhaenyra’s antics get Daemon deservedly kicked out of King’s Landing, again, after he gained his way back into the Targaryen fold by winning the Stepstones. It’s unclear whether, as Viserys (Paddy Considine) suggests, this was all a ploy by Daemon to get himself married to Rhaenyra. It almost seems like Daemon himself isn’t really sure. Regardless, Rhaenyra’s wild night brings catastrophic changes to her world, as she is now to be married to Laenor Velaryon (Theo Nate), which she correctly deduces is a choice meant to solve her politically-phobic father’s headaches.

RELATED: ‘House of the Dragon’ 101: What are the Stepstones and where’s Old Valyria

The rest of the episode contrasts Rhaenyra’s night of fun with scenes of Alicent firmly trapped in her role as Queen. It’s obvious that not a word comes out of her mouth that hasn’t been tempered (at least until we see her face Rhaenyra later). And whilst Viserys values her as a friend and helpmate, now that she’s his wife, he expects her to know a wife’s place, which seems to be as a target for ridicule in service of some brotherly bonding, not to mention delivering sex on command. 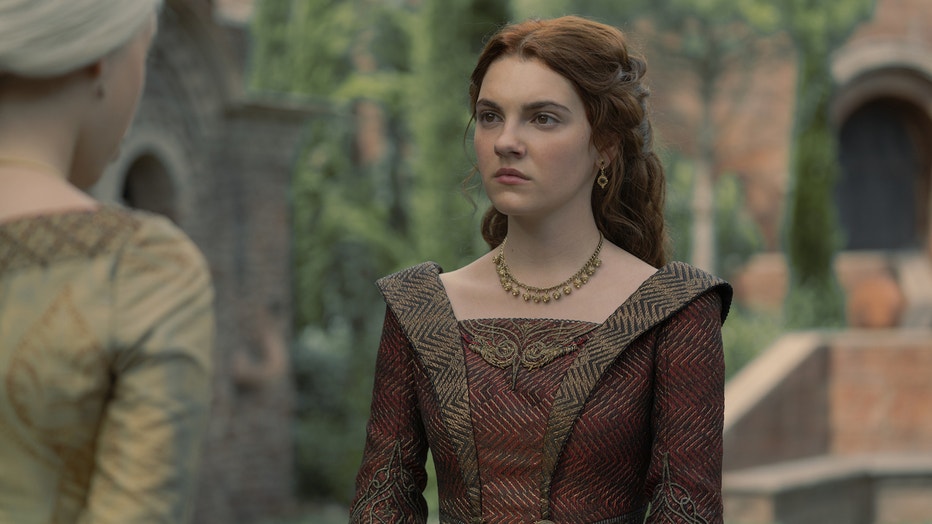 When Alicent goes to Rhaenyra to ask her the truth about her adventures, however, she is furious, bleary-eyed and tired. It’s almost a relief to see. It’s clear Alicent is sick of being the only one doing what is expected of her and holding everyone together, especially now that Rhaenyra’s actions have caused a rift between Viserys and Alicent’s father, Otto Hightower (Rhys Ifans).

Indeed, one of the more intriguing grace notes of the episode involves Rhaenyra’s unexpected sense of power. Despite getting punished for her indiscretions by being forced to wed her father’s choice of suitor, she still holds her own, demanding Otto’s resignation as her price. Otto’s departure means there’s a power vacuum for the position of Hand of the King. And with dark anger lurking in Viserys, who seems to grow more unstable and unsure of himself by the minute, it remains to be seen how this will change both Alicent and Rhaenyra’s positions.

WATCH FREE ON TUBI: "Queen Elizabeth II: The Unlikely Queen" — get the app

"I swear this to you, upon the memory of my mother." - Rhaenyra to Alicent 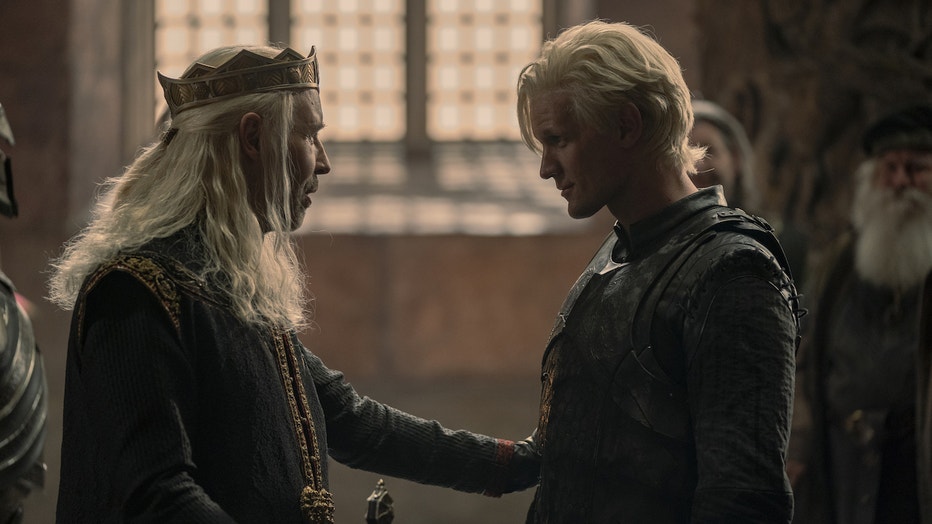 Rhaenyra has to do some damage control with Alicent — even swearing on her mother’s memory that nothing happened — but Daemon just confesses to Viserys that yes, he did fumble around with his daughter. The contrast between those two scenes really shows you the crux of the matter. Perhaps a king (or prince) can want and bed who he wishes, but a future queen doesn’t have that luxury.

Emily Carey, we salute you! Even if no one in King’s Landing is noticing Queen Alicent, we sure are. 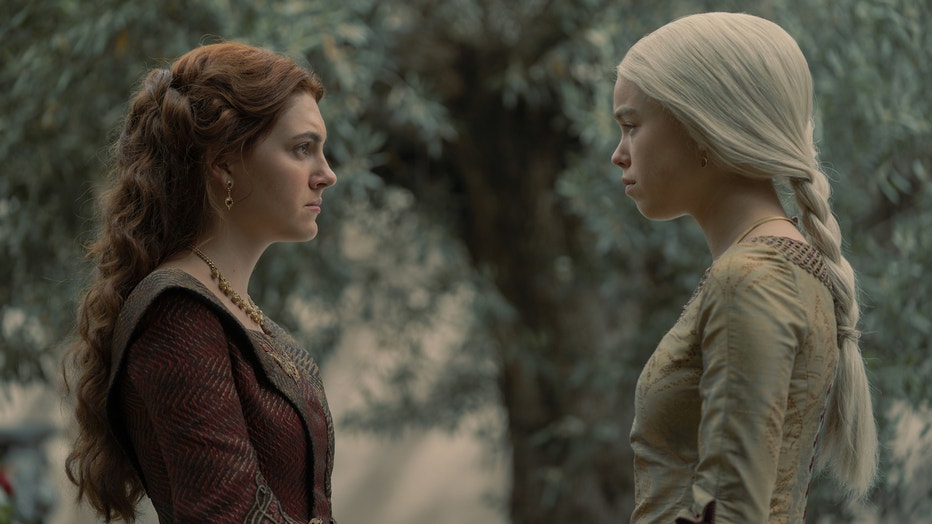 We asked for unhinged Rhaenyra and in "King of the Narrow Sea," we get it. It’s especially interesting to see how Rhaenyra’s moral framework bends over time; she has her fair share of flaws as well as her more positive attributes. Yet while Rhaenyra’s sex scene with Cristen is expertly played by Alcock, who manages to convey both desire and the unique awkwardness of a first time, her overall sexual awakening and its aftermath fall oddly flat.

That’s not just because of the incest/age gaps/power dynamics/etc. Instead, it has more to do with the show’s time-jumps. Because "House of the Dragon" has to sum up years of tiny slights and larger drama in only 10 episodes, there’s no time to witness Rhaenyra’s experiences with rumor and gossip, which inadvertently makes the stakes feel lower than they should.

WATCH FREE ON TUBI: The historical drama series "Rome" — get the app

A lot of that comes back to the show’s source material. George R.R. Martin’s Westeros spinoff book "Fire & Blood" is structured less like a conventional novel, instead operating as something of a historical tome. And in echoing the text from which its springs, "House of the Dragon" is missing the small human moments that made audiences so desperately root for the characters in "Game of Thrones." So far, everyone seems to be trying their best to just get on with their lonely suffering. The more any of these characters try to fight against their cage, the smaller those cages seem to become.

"King of the Narrow Sea" is an episode ripe for discussion, and one that’s likely to become more interesting with repeat viewings — and as audiences become accustomed to an approach to sex that’s very different, and substantially better, than its parent series. Even if that classic "Game of Thrones" incest is still alive and well.

About the writer: Chloe Johnson is a freelance writer, magazine editor and longtime Sansa Stark fan. You can find her other work at The Bookseller, The Grammys, and The Independent.

Binge while you wait: "Shameless," streaming free on Tubi

Shameless (2004-2013): Before "Shamless" was a hit Showtime series starring Emmy Rossum and William H. Macy, it was a British dramedy featuring (among others) a young James McAvoy. Set on the fictional Chatsworth council estate in Manchester, "Shameless" chronicles the lives of the Gallagher family and their neighbors, zeroing in on the nuances of British working-class culture. Frank Gallagher (David Threlfall) is an alcoholic single dad trying (and mostly failing) to raise his six kids right. Instead it’s his eldest daughter Fiona (Anne-Marie Duff) who actually keeps things in order. "Shameless" deploys such a unique tone that it even managed to win both Best Drama Series at the BAFTA TV Awards and Best TV Comedy Drama at the British Comedy Awards. Rated TV-MA. 11 seasons, 139 episodes. Also featuring Rebecca Atkinson, Alice Barry.

How to watch "Game of Thrones: House of the Dragon" episode four

The first four episodes of "House of the Dragon" are currently streaming on HBO Max. They’re also available On Demand for HBO subscribers.

When is the next episode of "Game of Thrones: House of the Dragon"?

Episode five of "House of the Dragon" premieres on HBO on Sunday, Sept. 18 at 9 p.m. ET/PT. It will also stream on HBO Max at 9 p.m. ET/6 p.m. PT — so West Coast fans can watch along simultaneously. New episodes air weekly through Oct. 23.