Kristy Hairston said she was touring the Hoover Dam when she heard this explosion.

BOULDER CITY, Nev. - A transformer exploded Tuesday at Hoover Dam, one of the nation's largest hydroelectric facilities, producing a thick cloud of black smoke and flames that were quickly extinguished.

No one was hurt in the explosion near the base of the dam, an engineering marvel on the Colorado River that straddles the border of Arizona and Nevada. Electricity produced at Hoover Dam continued flowing to the 8 million people in Arizona, Nevada and Southern California who rely on it, the Western Area Power Administration said.

The cause of the fire was under investigation and officials were working to determine the extent of damage to the transformer, one of 15 at the complex that control the voltages for power sent to customers.

"There is no risk to the power grid," said Jacklynn Gould, a regional director for the U.S. Bureau of Reclamation.

The fire ignited around 10 a.m. and was out within a half-hour, Gould said in a statement. It captured the attention of tourists who said they heard an alarm sound and felt the ground rumble beneath them.

William Herro, 13, of San Francisco, was on a viewing bridge with his parents when he saw the explosion and then heard a "big boom."

"A ton of black smoke just exploded in the air. It looked almost like a mushroom and then a fire followed," Herro said. "I was really surprised and I started filming."

The explosion occurred on the apron of a building housing turbines that is slightly downstream from the base of the dam, about 25 miles (40 kilometers) southeast of Las Vegas. Hoover Dam is one of the tallest concrete dams in the U.S. at 726 feet (221 meters). Each of its 17 generators can supply electricity to 100,000 households. 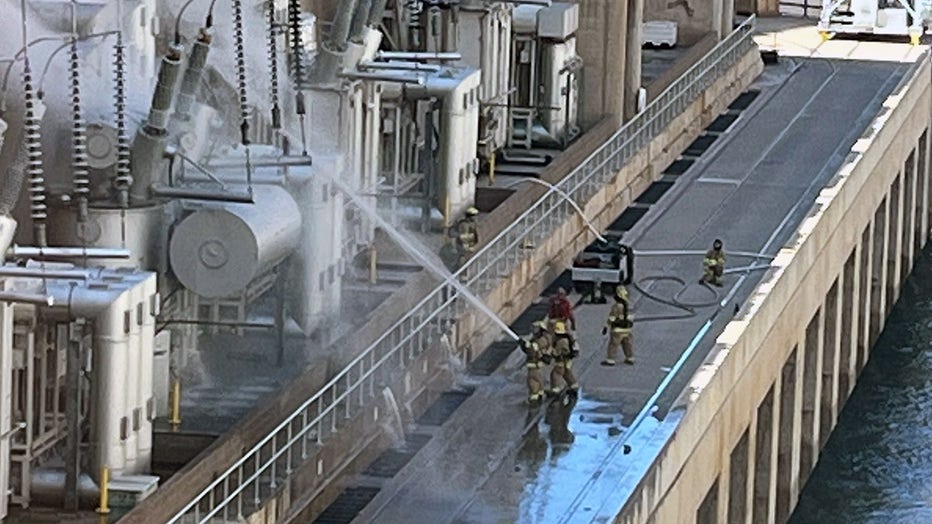 As many as 20,000 vehicles a day drive across the wide top of the dam, which is a National Historic Landmark and is seen in films including "Transformers" and "Fools Rush In." Most motorists traveling between Arizona and Nevada use a bypass bridge high above the dam that opened in 2010.

The Bureau of Reclamation owns and operates the dam, powerhouses and turbines. The power produced at the site is transferred to a substation where it's marketed through the Western Area Power Administration.

Hoover Dam is considered a baseload source of power, meaning it can respond quickly to the need for additional power on the grid or dial back supply.

The fire triggered an alert at the Western Area Power Administration's control center in Phoenix. Spokesman Lisa Meiman said while the loss of a transformer or other equipment on hydropower facilities can put pressure on a grid, "no single source is integral to the health of the power grid."

The administration markets power from 57 federal hydroelectric facilities. Hoover Dam and Glen Canyon Dam upstream on the Arizona-Utah border are among the largest, Meiman said.

Hydropower from those dams has threatened lately by the declining levels of Lake Mead and Lake Powell, the two largest human-made reservoirs in the U.S. that hold water from the Colorado River.

Federal officials have taken action in recent years to prop up the lakes to preserve the dams' ability to generate power and keep water flowing to the Western states and Mexico that rely on it. Drought and climate change have sunk the lakes to their lowest levels in decades.