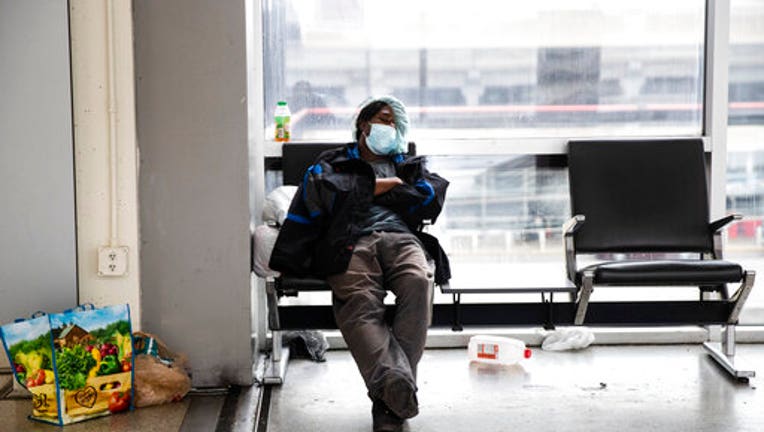 A homeless person sleeps at Philadelphia International Airport in Philadelphia, Monday, May 25, 2020, during the coronavirus pandemic. (AP Photo/Matt Rourke)

PHILADELPHIA (AP) — Philadelphia officials on Tuesday began removing dozens of people who have been sleeping at the airport during the coronavirus pandemic, and they plan to administer rapid COVID-19 tests before taking them to homeless shelters.

Officials at Philadelphia International Airport had initially planned Friday to remove the 50 to 100 homeless people who have been sleeping at a baggage claim area underused during stay-at-home orders. But airport and city officials agreed to wait until Tuesday after advocates threatened to sue if the people were moved to shelters without being tested.

City Manager Brian Abernathy said Friday that Delaware County officials also would be on hand Tuesday to offer to take people to shelters in the neighboring county. He said arrangements were in place to house anyone who wanted to go to a shelter.

The airport began enforcing new rules Tuesday, allowing only workers and those with airport business in the terminals and baggage areas.

The Philadelphia Inquirer reported Thursday that homeless advocates were concerned about people being moved from the airport without being tested for the virus and the possibility that they could take the illness into shelters.

Representatives from the Homeless Advocacy Project and the nonprofit group SELF, among others, had signed on to legal action if the city moved forward with removal without testing, the Inquirer reported.

“We were alarmed and concerned about where those individuals would go, if they would receive the kind of attention and support they need from a health stand point and from a housing standpoint, because we do believe housing is a public health issue,” said Michael Hinson, president and CEO of SELF.

It was his understanding, Hinson said, that the individuals at the airport would be offered testing, taken to a Center City location for that testing and housed in quarantine housing until the results came back.

The groups also worked to convince city officials that all those living in shelters currently and entering shelters, including staff, should be tested, adding that a plan is in the works, he said.

As airport security, outreach workers and city employees worked to test and relocate the homeless people camped at baggage claim, spokesperson Florence Brown said in a statement Tuesday that the airport had run out of options.

“Recent strains on the region’s social service network due to the COVID-19 crisis have created an urgent need for the airport to narrow its defined usage of the facility’s public spaces,” she said. “The decision to limit building access to only those with airport business was a difficult one that followed months of attempted interventions, compassionate outreach and ultimately, a destruction of property and deterioration of safety.”

At the peak of the airport encampment, there were more than 150 people sleeping at the baggage claim areas around Terminal A, which in part serves international flights and has been out of use for about two months.

But problems have been mounting because of worker complaints and reductions in access to food, staff cleaning and stocking bathrooms in the area.

Airport officials have said portions of the baggage claim area will be put back in use around June 4, which coincides with when the state is expected to ease pandemic restrictions in the city and neighboring suburbs.