On the first day of jury selection in the rape trial against Harvey Weinstein, the judge threatened to jail the disgraced movie mogul for texting in the courtroom. Reported by Lisa Evers

NEW YORK - The judge at Harvey Weinstein's sexual assault trial pressed ahead with the start of jury selection Tuesday, rejecting a defense request for a "cooling-off period" following the burst of publicity over the filing of new charges against the Hollywood mogul in Los Angeles.

Weinstein's lawyers suggested that the timing of the new sex-crime charges, announced on Monday, was deliberate on the part of prosecutors, and they asked for a delay to let the publicity subside.

"For a prosecutor, this is Christmas morning — the morning of jury selection to have him smeared everywhere," defense attorney Arthur Aidala said.

Judge James Burke refused a postponement, saying he is confident the jury will understand Weinstein is presumed innocent, and the first 120 potential jurors were brought in, step one in a process expected to take weeks, given heavy news coverage of the case and the way the once-powerful studio boss has been cast as the archvillain of the #MeToo movement.

The judge said it would be a high-profile case and asked if there was anyone who could not be impartial. About 40 hands went up. Those people were dismissed. 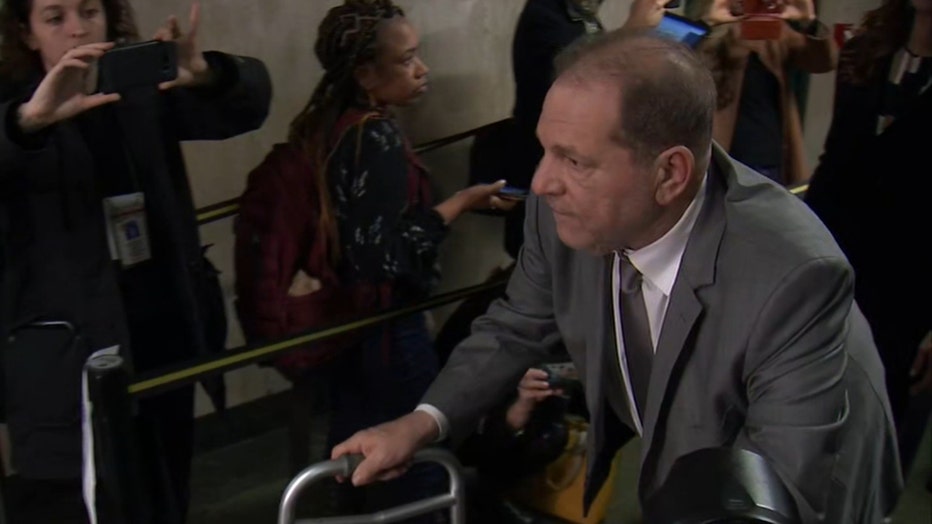 The day began with the 67-year-old Weinstein shuffling into court with a walker following recent back surgery, and the session soon erupted in legal fireworks, with the judge denying a request from prosecutors to revoke the defendant's bail and jail him until the trial is over. Prosecutor Joan Illuzzi argued that the new case in Los Angeles increased Weinstein's incentive to flee.

"There is a grave risk that this defendant will realize at some point that the evidence is overwhelming," she said.

While turning prosecutors down, Burke ripped into Weinstein and threatened to jail him for texting on his cellphone in the courtroom.

"Mr. Weinstein, is this really the way you want to end up in jail … by texting and violating a court order?" he said, cutting off the defendant before he could answer.

The prospective jurors were issued a detailed questionnaire that asked such things as: "If you have seen, read, or heard anything about the case, does that information affect your ability to be a fair and impartial juror?" They were also read a list of names that could come up during the trial, including actresses Salma Hayek, Charlize Theron and Rosie Perez.

Weinstein was introduced to the group and stood up with the use of his walker.

Weinstein is charged in New York with raping a woman in a Manhattan hotel room in 2013 and forcibly performing a sex act on another woman in the city in 2006. He has said any sexual activity was consensual. The most serious charges against him carry a mandatory sentence of life in prison.

On Monday, prosecutors in Los Angeles charged him with sexually assaulting two women on successive nights at hotels in L.A. and Beverly Hills during Oscar week in 2013. Those charges could bring up to 28 years behind bars.

As jury selection was about to begin, Weinstein attorney Donna Rotunno questioned the timing of the new charges, saying if anyone believes it was coincidence, as the district attorney in Los Angeles insisted, "I'd like to sell them the Brooklyn Bridge."

Once one of Hollywood's mightiest and most feared producers, Weinstein has been accused of rape, sexual assault, harassment or other misconduct by scores of women, from famous actresses to assistants at his company.

The allegations, first exposed by The New York Times and The New Yorker in 2017, brought his downfall and helped spark the #MeToo movement against powerful men who prey on women.