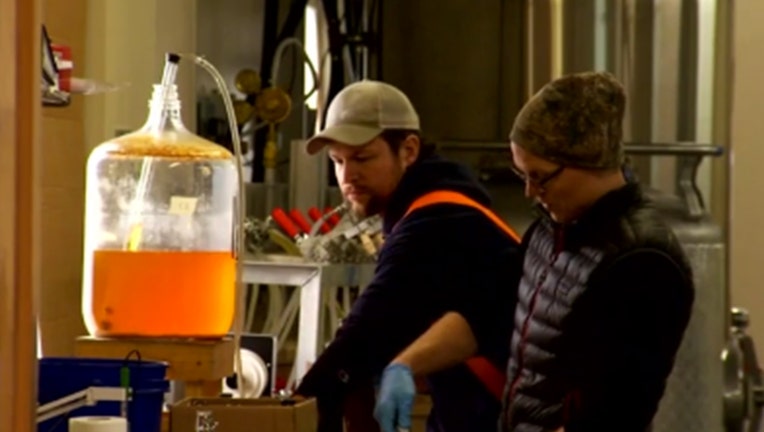 GERMANTOWN, N.Y. - Five years ago, Martin Bernstein walked into Eric Childs' fermentation supplies shop in Kingston, New York, in search of a fermentation kit. Eric, it turned out, wanted apples. Martin had apples. And so, the two established a partnership that soon evolved into Abandoned Hard Cider.

"We discovered these old apple trees," Martin said, "and I was like: 'Wow, these taste like nothing I've ever tasted before in my life.'"

The foundation of every cider Martin and Eric ferment is in wild apples.

"Here's how we crowdsource our apples," Martin said, pulling a paper flyer out of his pocket. "We send out a mailer, in the mail."

Martin and Eric rely on five counties of upstate neighbors with backyard orchards, stands of a few trees and lone individuals to create Abandoned Hard Cider, offering pruning and the finished product in exchange for fruit.

"They're called spitters because you spit them out they taste so bad," Martin said.

They taste bad until Martin hands them over to Eric, in an old apple-packing house on the side of County Route 6 in Germantown, Columbia County, where batches of seasonals, single varietals and other experimental concoctions bubble in various containers—some of which Eric toils and troubles to blend together to meet his own benchmarks for acidity and sugar level from as many as 100 different varieties of apple.

"We are coming really close to on-point from the year before with our blend," Eric said, "but batch-to-batch before blending is very unique and very different."

"The wild apples have tannins," Martin said. "They have acidity. They have all these different flavor compounds that you don't find in a gala or Fuji."

Abandoned Hard Cider distributes statewide and expects to soon sell its core three products in California, D.C., and Massachusetts—places where Martin and Eric believe their "Made in New York" label carries a connotation of expertise and quality.

"We hope it sort of signals the same thing as a California wine or a Napa Valley wine," Martin said.

"As we grow, we want more and more people to know that we want your apples," Eric said.

"No apple left behind," Martin said.