The new wording by the sport’s governing body follows a campaign started by the Norwegian national team in July and now allows women to wear "short tight pants" instead of bikinis.

The Norwegian federation was fined because players wore "improper clothing" at the European Championship in July. They had worn shorts to protest the bikini rule.

The five Nordic countries urged the International Handball Federation "to review uniform rules in accordance with gender equality" after the Norway team was punished for wearing shorts instead of the mandated bikini uniform. 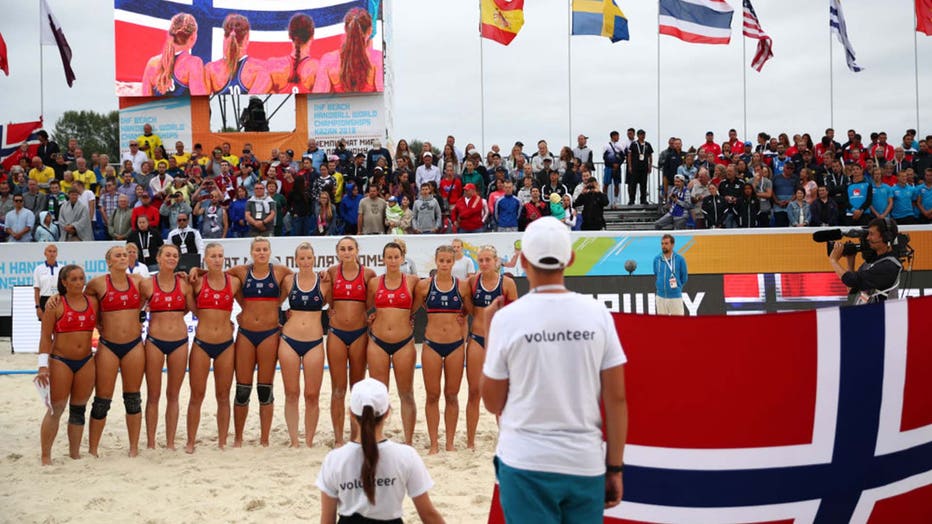 FILE - The Norway team lines up during the 2018 Women's Beach Handball World Cup final against Greece on July 29, 2018, in Kazan, Russia.

"The claim is obsolete, and one would think it belonged to another century," Denmark sports minister Ane Halsboe-Joergensen said on Sept. 28. "I also have a hard time seeing what sporting reasons should be behind female athletes having to play in a bikini."

In the open letter, the five sports ministers from Denmark, Norway, Sweden, Iceland and Finland "urge the International Handball Federation and other international sports federations to review uniform rules and to allow athletes to be dressed in a way that suits performance and comfort."

Pop singer Pink backed the Norwegian team and offered to pay the 1,500 euros ($1,700) fine, saying she was "very proud" of the team for protesting against the rule. Pink tweeted that "the European handball federation SHOULD BE FINED FOR SEXISM. Good on ya, ladies."

It took no time for tennis legend Billie Jean King to usher in her own support of the Norwegian team and denounce the double standard as it pertains to male athletes and the "sexualization" of women athletes.

RELATED: German gymnastics team wears unitards to push back on 'sexualization' of sport

"The Norwegian Women’s Beach Handball team is facing fines for wanting to wear shorts instead of bikini bottoms. The bottoms are not to cover "more than 10cm on any sides," King wrote on Twitter. "The men’s team wears shorts. The sexualization of women athletes must stop."

On July 20, the team also thanked all who publicly supported them amid the headlines which seemingly took away from the event itself.

"We are also very proud about making a statement in the bronze final by playing in shorts instead of required bikini bottoms! We are overwhelmed by the attention and support from all over the world!" the Instagram post read.

The Switzerland-based IHF updated the rules in a document on its website dated Oct. 3 but there still appears to be a gender divide as female players are required to wear pants "with a close fit" while men’s shorts can be "not too baggy."

FOX News and Catherine Stoddard contributed to this report.