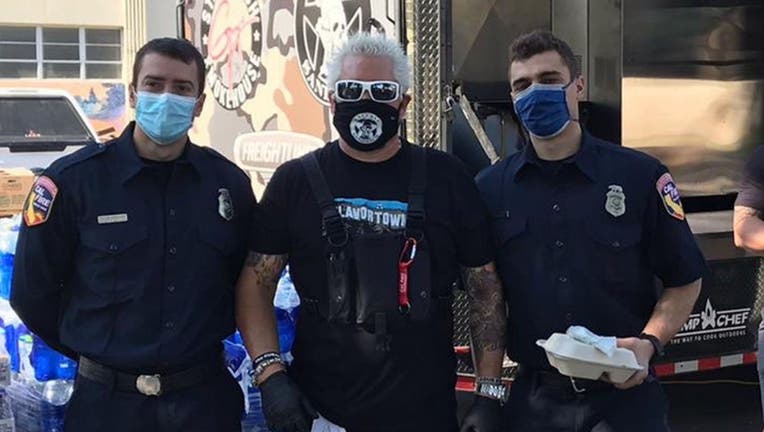 Guy Fieri fed firefighters from the Sonoma-Lake Napa Unit of the California Department of Forestry and Fire Protection over the weekend. (CAL FIRE LNU @CALFIRELNU)

The Mayor of Flavortown is bringing food to first responders battling the California wildfires.

Food Network star and restaurateur Guy Fieri fed 2,774 firefighters from the Sonoma-Lake Napa Unit of the California Department of Forestry and Fire Protection over the weekend, according to a tweet from the unit’s official account.

“A MILLION THANKS to @GuyFieri and his talented team for bringing his delicious delights to #GlassFire base camp!" the tweet reads. "He made a lot of people very happy & full today.”

Fieri served up a salad medley with penne pasta, meatballs and garlic bread for the firefighters, serving around 2,000 meals, according to the Santa Rosa Press Democrat.

The TV host of "Guy's Grocery Games" wrangled up a crew of chefs and friends to prepare the food next to the fire camp at the Sonoma County Fairground, the outlet reported.

This isn't the first time Fieri has stepped up to feed Californians affected by wildfires, as he's previously cooked for responders and evacuees of the Santa Rosa fires in 2017 and both the Carr and Camp Fires in 2018. He also organized his fellow Food Network chefs to thank 3,000 of the police officers, firefighters, EMT workers and doctors who responded in the wake of the 2017 shooting in Las Vegas.

A blaze in California's Napa Valley wine region continues devastating restaurants and wineries within the state, setting an alarming record Sunday with 4 million acres burned by wildfires, Cal Fire said, consuming an area larger than the state of Connecticut.

Cal Fire said the fire burned around 64,900 acres as of Sunday night and is 26% contained. More than 300,000 people were still under evacuation orders Sunday.