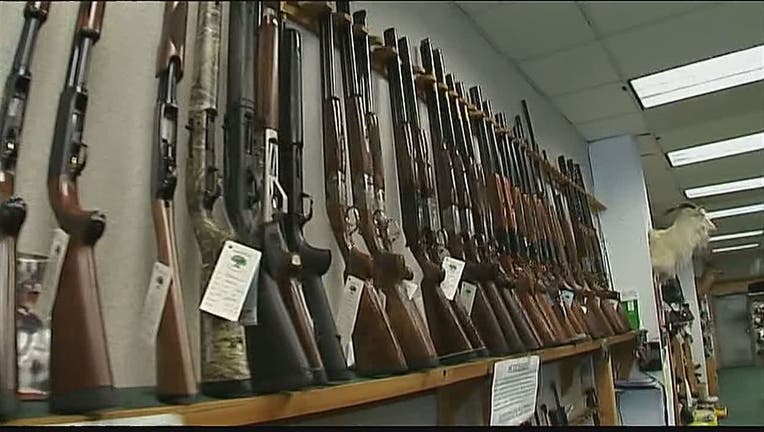 RICHMOND, Va. - A battle over gun control in Virginia with national implications is heating up as the legislature prepares to vote on sweeping new restrictions and localities band together to defy them in growing numbers.

Virginians turned out to debate the measures and other issues at public budget hearings on Thursday, less than a week before the General Assembly's first legislative session of 2020. Both the Virginia Citizens Defense League (VCDL) and Gun Owners of America specifically warned about Democratic Gov. Ralph Northam's related budget proposal, which directs $250,000 for the Department of Corrections to incarcerate people as a result of new restrictions.

Another measure included over $4 million and 18 "authorized positions" — part of an apparent team that Second Amendment groups warn could be used to enforce an assault weapons ban. The new General Assembly is expected to vote on two bills in particular – SB 18 and SB 16 – which would ban assault weapons, raise the minimum age of purchase to 21 and require background checks for any firearms transfer.

In the run-up to the session and following state elections in November, a defiant protest movement has taken shape that could influence similar movements in other states. More than 100 cities, towns and counties have passed "sanctuary" resolutions meant to flout an assault weapons ban and other proposals.

According to local outlets, activists on both sides of the debate raised concerns during a hearing in Suffolk.

“This is not about gun safety, public safety, or whatever you want to call it,” one speaker said, according to WTKR. “It’s about control of people based solely on a radical, political, extremist agenda." The meeting in Suffolk was "packed," according to WAVY, and included at least 100 speakers — although it's unclear how many spoke about gun control.

Moms Demand Action, a pro-gun control group, pushed gun safety provisions. “We know that, as it has been proven, gun safety laws save lives,” a representative from the group reportedly said.

Other meetings took place in Manassas, Richmond, and Blacksburg on Thursday.

"We must be focused on making it more difficult for criminals to access firearms and addressing the behavior behind these instances of mass violence instead of infringing our American constitutional rights," Rep. Rob Wittman, R-Va., told Fox News on Thursday.

"I am against the current laws put forth by the General Assembly to restrict firearm purchases and I will remain committed to preserving the right of all law-abiding individuals to purchase, possess, and use firearms.”

Yet Northam's attorney general, Mark Herring, already rejected the notion that local resolutions would have any legal effect. "It is my opinion that these resolutions have no legal effect," he said in an advisory opinion from Dec. 20.

"It is my further opinion that localities and local constitutional officers cannot nullify state laws and must comply with gun violence prevention measures that the General Assembly may enact."

"This radical view is demonstrably false, and ignores the significance of the fact that local officials are required by law to take an oath to support the federal and state constitutions above the laws enacted by the General Assembly," the group said in a memo dated Dec. 26.

The memo framed sanctuary resolutions as attempts to avoid conflict, but again warned that localities wouldn't cooperate if the General Assembly implemented the new restrictions.

"However, Second Amendment Sanctuary Resolutions announce that, should the government in Richmond act lawlessly, then local officials and the People they represent will not cooperate and may take steps to actively resist," it read.

Neither the governor's office nor the attorney general's responded to Fox News' request for comment. Gov. Northam struggled to push gun control through the previous General Assembly and has faced political backlash over his infamous blackface photo controversy. However, as the political establishment seemed to move past the matter, it appeared as though Democrats were united on gun control before the 2020 session.

The debate could refocus 2020 races even more on the Second Amendment as the sanctuary movement gains traction in the state. One gun store reported a 200 percent increase in sales after Democrats won the legislature last year — a trend that many stores have historically seen with the prospect of new gun restrictions.

VCDL claimed that Thursday's meetings, along with other local gatherings on the issue, saw substantial attendance. It's unclear how many of the attendees were reacting to the gun control measures.

Virginia Democrats like Rep. Abigail Spanberger could feel the heat from voters as the GA activity fuels ever more sanctuary resolutions. As recently as the end of December, Fauquier County approved a measure opposing gun control legislation.

According to a map from VCDL, much of Spanberger's district has already approved those measures. “Rep. Spanberger is committed to protecting and upholding all of our constitutional rights, including our Second Amendment rights," a Spanberger spokesperson told Fox News on Thursday.

"She is also committed to protecting the safety of families, children, and law enforcement officers across Central Virginia and the country — and therefore supports common-sense, gun violence prevention measures at the federal level, such as the bipartisan background checks legislation she helped pass earlier this year."

Spanberger's office appeared to address potential conflicts between the state and localities, saying: "As a former law enforcement officer, Rep. Spanberger believes firmly in the rule of law — and as there are legal and jurisdictional challenges that may arise from the intended designation of special status zones in a Dillon Rule state such as Virginia, she will continue to engage with her constituents and closely observe the efforts of the localities she represents.”

The Dillon Rule refers to guidelines governing the relationship between state and local governments.