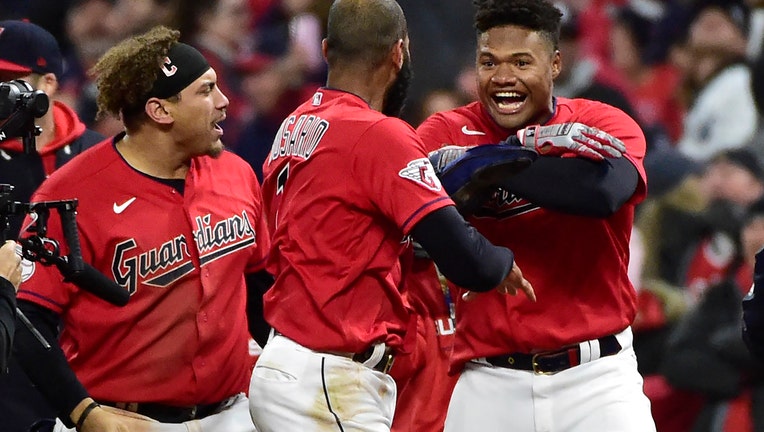 CLEVELAND - The affable rookie who loves SpongeBob SquarePants has backed the New York Yankees into a postseason corner.

Oscar Gonzalez hit a two-run single with two outs in the ninth inning, rallying the Cleveland Guardians to a 6-5 win over New York on Saturday night for a 2-1 lead in their AL Division Series.

Gonzalez, a postseason hero just a week ago, lined a 1-2 pitch from Clarke Schmidt through the middle to score rookie Steven Kwan and Amed Rosario as the young Guardians, who have shown no fear during this storybook season, rallied once again and pushed the Yankees to the brink of elimination.

"We’ve seen it in two series so far from this guy," Guardians starter Triston McKenzie said. "He comes up in the 15th inning and hits a home run, has a game-winning hit in another game, has the hit tonight.

"There’s a maturity level at the plate you don’t see all the time."

Aaron Judge hit a two-run homer for New York, which carried a 5-3 lead into the ninth before its bullpen flopped and the Guardians staged yet another comeback win.

As Rosario crossed the plate, Gonzalez flung his helmet in the air as his teammates rushed onto the field to mob him. The 24-year-old outfielder hit a walk-off homer in the 15th inning last week to sweep the Tampa Bay Rays in the wild-card round.

Game 4 is Sunday night, when the Yankees turn to ace Gerrit Cole to prevent an early postseason exit.

"Love that Gerrit’s on the mound," manager Aaron Boone said. "Let’s go get it. Tonight obviously was a gut-wrenching ending, but we've got to get over it. Now we’re obviously up against it, but I still love our chances."

Before Cleveland’s comeback, the Yankees were 167-0 in the postseason when entering the ninth inning with a multiple-run lead.

The win followed a familiar formula for the Guardians, who led the majors with 29 wins in their final at-bat and have now done it twice in a week – both times with Gonzalez delivering the game-winning hit.

Gonzalez walks to the plate to the theme for "SpongeBob SquarePants," a fitting anthem for baseball’s youngest team.

"I go there singing the song because I have a big body," Gonzalez said through a translator. "But deep inside I feel like a kid."

Following the game, Gonzalez rode a scooter down one of the hallways inside Progressive Field.

Gonzalez joined Hall of Famer and fellow Dominican Republic native David Ortiz (2004) as the only players to get three or more hits in the ninth inning or later in a single postseason.

"It’s incredible," Gonzalez said. "I didn’t know about that stat, and I just thank God for that and what makes it more special is it’s from another fellow countryman."

With one out in the ninth, Myles Straw blooped a single off Wandy Peralta and scampered to second when the ball got by left fielder Oswaldo Cabrera, who missed it with a dive. Kwan then dropped a base hit into left and Boone brought in Schmidt.

Rosario followed with an RBI single to make it 5-4 before José Ramírez fisted an infield single to the open left side that shortstop Isiah Kiner-Falefa stopped with a slide, preventing the tying run from scoring.

Schmidt struck out Josh Naylor on three pitches before Gonzalez had his second monumental moment of this October.

Before homering a week ago, Gonzalez broke his belt sliding into second base and had to borrow first base coach Sandy Alomar's belt before play resumed. It's become a good luck charm for Gonzalez, who is following Alomar, a postseason hero in 1997 when Cleveland eliminated the Yankees in the Division Series.

"Something tells me Sandy will never see it again," Gonzalez said.

The Yankees are in trouble. They were outhit 15-5 and will be facing a team with all the momentum when they try force the best-of-five series back to Yankee Stadium for Game 5 on Monday.

"We lost a tough one," Judge said. "We have to come back and do our thing the next two games and take it back to the Bronx. It's as simple as that. We've been dealing with adversity all year long, this is nothing new to us."

Judge’s 449-foot shot in the third inning off McKenzie was his first hit in 10 at-bats in the series. The timing couldn’t have been better as the Yankees needed a spark and got a seismic jolt from baseball’s most feared slugger.

However, the Yankees’ bullpen, which has been plagued by injuries and inconsistency, couldn't protect the lead. It also hurt that Boone didn't have Aroldis Chapman, who was left off the playoff roster when he skipped a workout, and Clay Holmes had pitched the previous two games.

Cabrera hit a two-run homer and Bader added a solo shot for the Yankees, his second of the series.

Propelled by a red-dressed sellout crowd — there was the usual throng of loud New York fans on hand as well — the Guardians went ahead early but wasted scoring chances against starter Luis Severino.

In Game 4, Cole will face Cal Quantrill, the same matchup as the opener.

The winner of this series advances to the ALCS to take on the Houston Astros, who swept Seattle.

With Judge in a fall funk, Boone awoke Saturday with the idea of dropping the home run king from the leadoff spot into the No. 2 hole and making several tweaks to his lineup.

Judge struck out for the eighth time in nine at-bats in the series his first time up.

He didn’t miss on his second trip.

With Cabrera at third, Judge drove a 2-1 pitch from McKenzie over the 19-foot-high wall in the deepest part of Progressive Field, with the blast threatening to find an exit from the ballpark onto Eagle Avenue.

It was Judge’s 12th career postseason homer and No. 63 overall this year after he broke Roger Maris’ 61-year-old AL homer record.

The Guardians’ bullpen didn’t allow a run over 19 innings in this postseason before Bader connected off Sam Hentges. The streak ended one out shy of matching the major league record held by the 1983 Baltimore Orioles.

Quantrill has an unblemished track record at home. He’s unbeatable.

The right-hander is 14-0 with a 2.88 ERA over 44 career games — 34 starts — at Progressive Field. His 14-game winning streak at home is the longest in the ballpark’s history.

Quantrill hasn’t been able to explain his dominance in Cleveland, and he’s not about to start trying.

"Some of it’s probably a little bit of randomness, but I do enjoy pitching here," Quantrill said. "I enjoy the routine of working here and preparing. Things have gone well."

The Yankees extended their major league record by hitting a homer in their 20th straight postseason game. The streak started in Game 1 of the 2019 ALDS. The next-longest streaks are 14-gamers by the Dodgers (2020-21) and Astros (2017-18).

Cole was the winner in Game 1 after allowing one run and four hits over 6 1/3 innings. Quantrill lost the opener, giving up three earned runs — two homers — in five-plus innings.