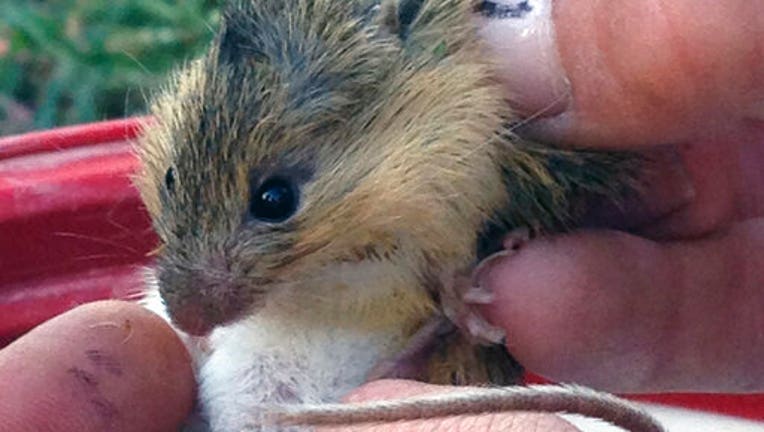 ALBUQUERQUE, N.M. (AP) — Environmentalists have accused U.S. land managers of failing to keep livestock and wild horses out of streams and other wetlands in Arizona's White Mountains, resulting in damage to habitat required by a rare mouse species found only in the Southwest.

The lawsuit filed Thursday in U.S. District Court in Tucson said the U.S. Forest Service is violating the Endangered Species Act and damaging the New Mexico meadow jumping mouse's habitat by failing to maintain fences, round up feral animals and enforce grazing regulations on forest land in southeastern Arizona.

With tails that make up most of their length, the rodents are called jumping mice because they can leap more than 2 feet (0.6 meters) into the air when frightened. Long tails help the mice keep their balance, especially when they scale plant stems to reach ripening seeds, one their main food sources.

The mice live near streams and depend on tall grass to hide from predators. They hibernate for about nine months, emerging in the late spring to gorge themselves before mating, giving birth and going back into hibernation. They normally live about three years.

“We entrust the care and protection of these publicly owned treasures to the Forest Service, but it’s completely abdicated its responsibility. And the adorable jumping mouse is being pushed closer to extinction,” said Robin Silver, a cofounder of the Center for Biological Diversity, one of the groups that is suing.

Staff members from the center and the Maricopa Audubon Society said they have documented extensive damage from horses and cows to the habitat of the mouse.

Officials in the Forest Service's Southwest region disputed the allegations in the lawsuit, saying the agency has been working since the mouse was listed as an endangered species in 2014 to use new and existing fencing to control livestock access to riverbank and wetland areas all while balancing water rights.

The battle over the meadow jumping mouse has lasted years. The listing of the mouse as endangered prompted the Forest Service to fence off streams and watering holes in some national forests to protect habitat thought to be ideal.

Ranchers and others then complained that the federal government was trampling private access to public lands by cordoning off areas important for livestock and other animals that call the arid region home.

In 2016, the U.S. Fish and Wildlife Service designated nearly 22 square miles (57 square kilometers) along about 170 miles (274 kilometers) of streams, ditches and canals as critical habitat in parts of New Mexico, Colorado and Arizona.

Silver said by not protecting these upper-elevation meadows and streams, the loss of the mouse in eastern Arizona and the Sacramento Mountains in southeastern New Mexico is likely.

The agency in 2018 partnered with Trout Unlimited and volunteers on planting willows along Arizona's Centerfire Creek. Another project with the National Forest Foundation focused on preserving characteristics of portions of the Wildcat, Centerfire and Stinky Creek drainages by reestablishing plants along the streams.

Martin said some of the areas were fenced to keep elk and cattle out so newly planted vegetation could become established.

Biologists have blamed drought, wildfires, flooding and grazing in the habitat of the jumping mouse for the rodent's declining numbers.

The Forest Service has been working with researchers at Northern Arizona University on surveying and monitoring the mice — analyzing what the mice are eating and using radio collars to better track the rodents.

Aside from asking the court to force the Forest Service to develop stronger protections for the mouse, the lawsuit asks for the Fish and Wildlife Service to promptly prepare a required recovery plan for the species.