SCOTTSDALE, Ariz. - Maricopa County prosecutors announced months later that they're seeking the death penalty for a grandmother and her husband after reported child abuse led to the death of an 11-year-old boy.

Court documents provide more information surrounding the death of an 11-year-old boy at an Old Town Scottsdale hotel. The incident, according to officials, happened at an Extended Stay America hotel near Scottsdale Road and Goldwater Boulevard.

"When we showed up, the victim, who ended up being a juvenile, was taken to a local hospital, where they were later pronounced deceased," said Sgt. Kevin Quon with the Scottsdale Police Department.

"When they talk about a juvenile being murdered in my backyard, that's horrific," said Peggy Hicklim, who lives in the area.

It’s just really tragic, it’s just really hard," said Jordan Barclay who also lives in the area. "You just make friendships as you stay here, you know, so that’s why I think it hurts the most." 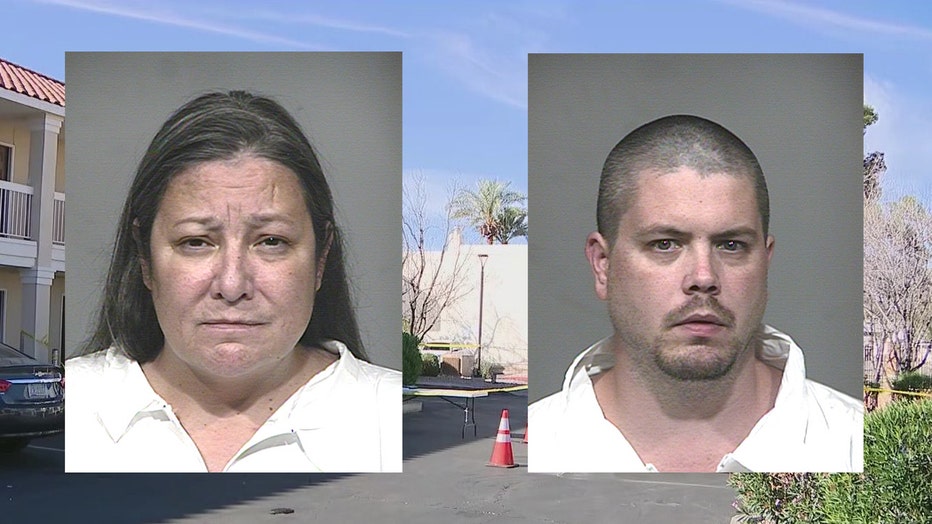 Scottsdale Police say 51-year-old Stephanie Marie Davis and her husband, 33-year-old Thomas James Desharnais, have been arrested and were booked into jail on suspicion of first-degree homicide and two counts of child abuse.

Prosecutors are seeking a death penalty sentence for both Davis and Desharnais.

"Detectives discovered another young male child under the care of the defendants. The Department of Child Services responded and took custody of the young male child," officials said.

"The individuals in this family are well known to SPD officers, who have contacted them on multiple occasions as the family members were panhandling in the vicinity of the Extended Stay America Hotel where they have reportedly resided since 2019," read a portion of the court documents.

Investigators noted that when David arrived at the jail for processing, multiple SIM cards were found concealed on her person, and in her belongings.

"The contents of which are unknown at this time," read a portion of the documents.

Prosecutors filed a notice of intent to seek the death penalty against both Davis and Desharnais if they are convicted of first-degree murder, the Maricopa County Attorney's Office said.

"As a community, it is our responsibility to protect and care for the most vulnerable in society, and this includes children. The protection of children has always been a top priority for me. This child’s suffering and death must be addressed and those responsible held accountable," Maricopa County Attorney Rachel Mitchell said in a statement. "Seeking justice for this young boy whose life was cut short in an especially heinous matter is what prosecutors are called to do."

On Feb. 7, Davis and Desharnais were indicted by a grand jury on 11 felony counts, including murder, child abuse, and tampering with evidence.

In court documents, investigators provided more information surrounding the juvenile's death, as well as a timeline of the case.

Davis, investigators say, called 911 from her hotel room at around 4:42 p.m. on Jan. 30, saying that the victim was found unresponsive and not breathing in the hotel room's bathtub.

"[Davis] also repeatedly stated that the male child had been ‘hurting himself’ all day," read a portion of the documents.

"[Scottsdale Fire Department] personnel advised [Scottsdale Police Department] officers that they had removed ‘a half liter of water’ from [the victim] via oral suction during their life saving efforts," a portion of the court documents read. Investigators also noted that crews on scene noticed a number of injuries to both the victim and his half-brother.

The victim, according to investigators, was taken to HonorHealth Osborn Trauma Center Hospital, where he was later pronounced dead.

Davis, according to court documents, told officers at the scene that the victim struck himself in the forehead with a ‘wrench,' and also ‘cut himself’ in his private area.

It was noted that neither Davis nor Desharnais sought any manner of medical attention for the victim.

Davis, according to court documents, told detectives that later on, the victim told her that he wanted to take a bath. Davis ran a bath for him, left him there, and then returned to the main part of the hotel room, where she got herself a puzzle book and took her medicine.

Afterward, court documents say Davis returned to the bathroom and reportedly found the victim lying on his side, with his face above the waterline of the water-filled tub. She claims she then drained the tub, removed the victim from the tub, placed him on the ground, and performed CPR.

Desharnais, however, provided a different account of what happened to detectives.

According to investigators, Desharnais said that as he entered the hotel room on Jan. 29, he heard Davis in the bathroom, striking the victim in the head with the metal ratchet.

"[Desharnais] estimated that [Davis] struck [the victim] at least three times in the head with the metal ratchet," read a portion of the documents. "The assault lasted approximately 10 seconds, and [the victim] was in the bathtub, naked when the assault took place."

After Davis left the bathroom, Desharnais said he gave the victim some paper towels to hold onto his bleeding head wound to try and slow the bleeding.

Desharnais, according to detectives, also noticed that Davis had used a knife to cut a portion of skin off the victim's private areas. Desharnais said he believed Davis did so because the victim has a problem with wetting the bed or peeing on himself, and that Davis is tired of cleaning the mess.

According to court documents, Desharnais was playing video games at around 4:00 p.m. on Jan. 30 when he heard what he initially thought was whimpering coming from an animal. He later learned that it was the victim who made the noise.

According to court documents, Davis was awarded full custody of the victim in 2015, and the whereabouts of the victim's biological parents are currently unknown.

The victim's biological mother, according to investigators, is considered a suspect in a murder, while the victim's half-brother's biological father is in an out-of-state prison for child molestation.

Investigators noted that there are no records of the victim and his half-brother having attended any Scottsdale Unified School District schools in recent years. Davis, according to investigators, claims she home-schools the two children during a previous investigation into allegations of disorderly conduct. No charges were filed for that matter.

Investigators say over the past two to three months, Davis became more physically and verbally abusive towards both the victim and his half-brother.

In addition, investigators allege that Davis would starve the victim, and provide him with little to no food for several days and that Desharnais will sometimes sneak him food, just so the victim will get something to eat.

"[Desharnais] has indicated that [the victim] will go multiple days without any food, and is very undernourished and underweight," read a portion of the court documents.

Detectives also allege that Davis has struck both boys in the head with a wooden broom handle at least once, and would routinely grab and pull the boys' hair as they try to run away from her.

In an interview with detectives, Desharnais said he has witnessed Davis striking the victim at least four different times in the head with a metal ratchet, causing numerous lacerations of varying depth.

Desharnais also told detectives that Davis would use needle-nose pliers to pinch and bend the children's fingers backward and that this has taken place on at least two different occasions to each of the boys, causing various cuts and bruising to the fingers.

Court documents say a search warrant executed at the hotel room on Jan. 31 turned up various evidence that was consistent with statements made by Desharnais during his interview, including blood evidence, a socket wrench hidden under a mattress, a broomstick outside the bathroom, and needle-nose pliers above a refrigerator

Officials with the Arizona Department of Child Safety say Davis and Desharnais were investigated three times in 2017. All the investigations were closed because the accusations were found to be unsubstantiated.

DCS officials released the prior reports involving the couple:

According to others, however, the reports of abuse did not stop there.

Courtney Lage said she reached out to authorities on two separate occasions.

"They did not behave like children should behave," said Lage. "They weren’t playing ball running around. You’re always very controlled in the room. It was sad."

Both Davis and Desharnais appeared in court on Feb. 1.

"These offenses are horrific, and can only be described as torture, your honor," said a county attorney to the presiding judge.

According to police, Davis and Desharnais are accused of first-degree murder and two counts of child abuse. Prosecutors had argued for no bond for Davis or Desharnais because of the severity of the crime, and the fact that neither are employed nor have a primary residence.

"The nature and circumstances to the offense are frankly horrific, involving allegations of the torture of multiple children on multiple occasions for a long period of time," prosecutors said. "The defendant poses a danger to the community.

"Evidence that’s in your response, and it is circumstantial evidence. These kids were always taken care of," said Davis.

Ultimately, a judge set a cash-only bond of $3.5 million for Davis and a $1.5 million cash-only bond for Desharnais. Should either make bail, they will be placed under electronic monitoring, and neither will be allowed to have any contact with minors.

As the shocking incidents of abuse came to light, people living in the area sounded off.

"Everyone here is hurt that these kids were right under our noses being abused like that," said Barclay.

Celebration of life held for Scottsdale boy who was reportedly abused, murdered by his grandmother

A memorial was held Feb. 6 near where the boy was found. A group of strangers, as well as city officials and first responders, wanted to honor the boy's life, even though they never knew him.

A memorial was held Feb. 6 near where the boy was found. A group of strangers, as well as city officials and first responders, wanted to honor the boy's life, even though they never knew him.

Courtney Lage lives across the street from the hotel and she saw signs of the reported abuse.

"I just want to emphasize they always had hats on and glasses and even in the summer, long sleeves obviously covering what police are saying now are bruises and scars," Lage said. "Just doing everything I can to get them some help, and it just wasn't enough, so anything we can do to try and prevent this moving forward. I'm just trying to give this little boy a voice, and his brother …"

Bikers Against Child Abuse also showed support at the event.

The victim's grandmother, identified as Stephanie Davis, appeared in court on Feb. 1 along with her husband. FOX 10's Brian Webb reports.