What is DDT and why was it banned in the US

DDT was developed as the first of the modern synthetic insecticides in the 1940s.

A study published on April 14 in the journal Cancer Epidemiology, Biomarkers & Prevention revealed that women whose grandmothers were exposed to the now-banned chemical known as DDT are seeing the generational impacts the chemical can have.

Widespread DDT use began in the U.S. in 1945 to control mosquitoes as well as cotton, soybean and peanut pests.

But in 1972, the U.S. Environmental Protection Agency issued a cancellation order for DDT use based on mounting studies revealing the adverse environmental effects DDT had on animals as well as the potential to cause humans harm.

"Since then, studies have continued, and a relationship between DDT exposure and reproductive effects in humans is suspected, based on studies in animals. In addition, some animals exposed to DDT in studies developed liver tumors. As a result, today, DDT is classified as a probable human carcinogen by U.S. and international authorities," according to the EPA. 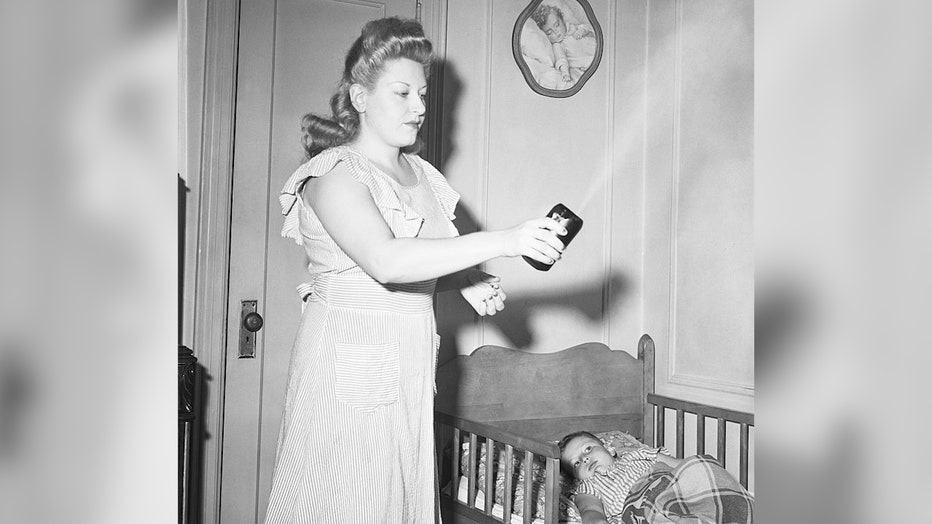 FILE - Woman in Brooklyn, shown using the Army's DDT bomb to spray her bedroom and so kill all insects. Her son Robert, 5, watches from bed and illustrates the fact the spray is not harmful except to winged pests.

The chemical is known to be persistent in the environment. It accumulates in fatty tissues and can travel long distances in the upper atmosphere. Now, nearly 50 years later, scientists are still finding evidence of the long-term negative impacts DDT can have, not just on the lives of those who were directly exposed to the chemical, but to their children and grandchildren as well by inducing earlier periods and even causing obesity.

"Our findings are consistent with the hypothesis that grandmother (F0) exposures to DDT could have contributed the dramatic increases in obesity in current young adult women, including the granddaughter (F2) generation in the CHDS cohort. This conclusion is strengthened by our prior observation that F0 exposures to DDT were also associated with daughters’ mid-life obesity (F1) in this same cohort. Notably, perinatal exposure to DDT is associated with breast cancer risk factors in subsequent generations," according to the study.

The Child Health and Development Studies (CHDS), which was a cohort in the study, have been keeping track of the multi-generational impacts of DDT over the past 60 years.

The CHDS archived blood and other samples from the original grandmother generation which made "it possible to examine associations of environmental chemical levels with health outcomes in 3 generations."

According to data collected in the study, the chances of obesity in the granddaughter generation, which consisted of women between the ages of 26-30, was increased two to three times. It was also highlighted that getting an early period, some as early as 11, was two times more likely.

"This is further evidence that not only is a pregnant woman and her baby vulnerable to the chemicals that she’s exposed to — but so is her future grandchild," Barbara Cohn, co-author of the study, told the Los Angeles Times.

"This is something that people had always thought was possible," Cohn added, "but there had never been a human study to support the existence of that link."

Another study from the Endocrine Society published in 2015, which took nearly 54 years to conduct, was the first to directly link breast cancer risk to in-utero exposure to DDT.

The study, conducted by the Public Health Institute in Berkeley, California, found women exposed to high levels of DDT before they were born had nearly four times the risk of developing breast cancer as an adult.

Cohn, study author and director of the CHDS at the Public Health Institute, told FOX News that the women studied didn’t have any special connections or life circumstances that would subject them to out-of-the-ordinary or more than "everyday living" type exposure to DDT.

"The mothers in our research population, were not special with respect to DDT exposure," Cohn said. "Use of DDT peaked in 1959 and was still in active use in the U.S. in the 1960s. This is likely why all women we tested had DDT in their blood."

Similarly, the study tracked the daughters of women who participated in the CHDS for 54 years beginning in utero. According to study authors, CHDS participants were members of the Kaiser Foundation Health Plan who gave birth in Oakland, California or nearby. They enrolled in the study during their pregnancies during 1959-1967 and gave blood samples at that time that measured DDT levels during pregnancy and in the days immediately following delivery. Approximately 20,754 pregnancies were studied, giving birth to 9,300 daughters during that period.

The specific type of the chemical, o,p'-DDT is significant in the study because it was among the first recognized endocrine disruptors, shown to mimic and interfere with the function of estrogen hormones.

Because of this, DDT exposure is linked to birth defects and reduced fertility. Among the women diagnosed with breast cancer in the Endocrine Society study, 83 percent had estrogen-receptor positive breast cancer, a form of cancer that receives signals from the hormone estrogen to promote tumor growth.

"Effects across many generations have been seen for some chemicals in animals. Our study population, the Child Health and Development Studies, is one of the only possible resources for human research of this kind in our lifetime. It is a national treasure," Cohn told FOX News.

She added that DDT may not be the only culprit, and study authors plan to research the effects of similar chemicals.

"We are currently investigating whether exposure to other environmental chemicals in utero are linked to breast cancer in this same study population. There are many other chemicals that mimic or disrupt hormones," she said.