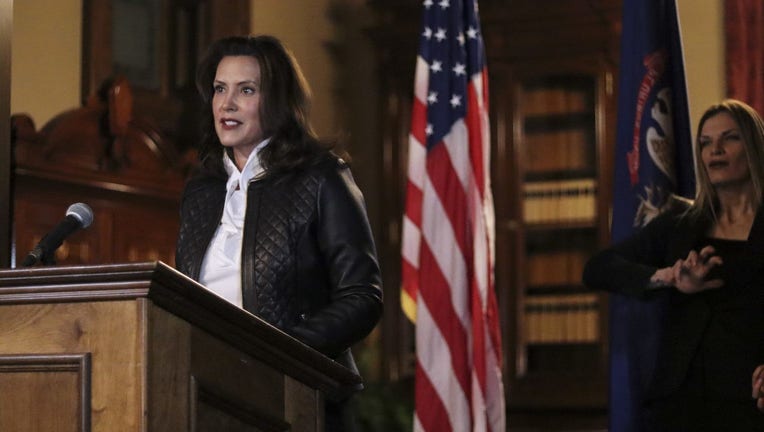 Gov. Gretchen Whitmer addresses the public on Thursday, Oct. 8, 2020 after a plot to kidnap her was unraveled.

(FOX 2) - Michigan Gov. Gretchen Whitmer tweeted Friday morning in the hours after it was announced that a plot to kidnap her from her vacation home and "try" her for "treason" before the November election had been thwarted by the FBI.

Gov. Whitmer also spoke publicly on Thursday, saying she knew her job would be difficult but she never imagined she would be subjected to a plot to kidnap and possibly kill her.

Whitmer said during that news conference that the nation shouldn't be fighting each other during the COVID-19 pandemic. She then criticized President Donald Trump for 'stoking' distrust and allowing anger to grow.

"This should be a moment for national unity, where we all pull together as Americans to meet this challenge head-on with the same might and muscle that put a man on the moon. Seeing the humanity in one another and doing our part to help our country get through this, instead, our head of state has spent the past seven months denying science, ignoring his own health experts stoking distrust, fomenting anger, and giving comfort to those who spread fear and hatred and division," Whitmer said.

"Just last week the President of the United States stood before the American people and refused to condemn white supremacists and hate groups like these two Michigan militia groups. Stand back and stand by he told them. Stand back and stand by. Hate groups heard the president's words not as a rebuke but as a rallying cry - as a call to action. When our leaders speak, their words matter. They carry weight. When our leaders meet with, encourage, or fraternize with domestic terrorists, they legitimize their actions and they are complicit. When they stoke and contribute to hate speech they are complicit."

President Trump responded to the governor's words and news of the thwarted plot later Thursday night.

Trump was live on FOX News Thursday night telling Sean Hannity that it was "his" US Justice Department and federal law enforcement that foiled the plot and took a shot at Gov. Whitmer for playing politics and blaming him for the extremists in her press conference, saying "She keeps up her little political act."

The president went father with his criticism on Twitter saying that "instead of thanking me, she calls me a white supremacist" adding he does not tolerate any extreme violence. Along the way, he took shots at Whitmer's husband's boat controversy from earlier in the lockdown, said she has done a terrible job, and renewed his previous calls to open the state up.

"Governor Whitmer of Michigan has done a terrible job," he wrote. "She locked down her state for everyone, except her husband’s boating activities. The Federal Government provided tremendous help to the Great People of Michigan. My Justice Department and Federal Law Enforcement announced ...

"They foiled a dangerous plot against the Governor of Michigan. Rather than say thank you, she calls me a White Supremacist- while Biden and Democrats refuse to condemn Antifa, Anarchists, looters, and Mobs that burn down Democrat-run cities.

"I do not tolerate ANY extreme violence. Defending ALL Americans, even those who oppose and attack me, is what I will always do as your President! Governor Whitmer - open up your state, open up your schools, and open up your churches!" his tweets read.

Whitmer and Trump have been on opposite ends of how to treat the virus all year. On Wednesday, the president called the Supreme Court ruling that Whitmer's COVID-19 executive orders were invalid a "big win" and encouraged schools and churches to open. Whitmer responded and said "Mr. President, millions of hardworking Americans are relying on you for a COVID-19 relief package. Get to work."

Democratic presidential nominee Joe Biden entered the fray late Thursday night to back Whitmer. He said he called the governor - who he once considered for his vice presidential running mate - and that he "was grateful that she and her family are safe," while commending law enforcement in preventing the plot "by emboldened domestic terrorists."