An Upper East Side man was indicted in connection with building and having more than a dozen ghost guns and hundreds of rounds of ammunition in his office and apartment, the DA and the NYPD said. Authorities said the man sent a photo of his 7-year-old son holding two pistols to a group chat with family and friends.

NEW YORK - A New York City man faces dozens of counts of felony weapons crimes related to so-called ghost guns after he sent a digital photo of his 7-year-old son holding two pistols to a group chat with family and friends, according to the Manhattan district attorney.

The investigation began when someone in the group chat was "alarmed" by the photo of Davis' son holding the guns and contacted the NYPD, according to a news release.

In November, New York City police searched an apartment that Davis uses as an office and his actual apartment on the Upper East Side and found 14 guns, 400 rounds of ammunition, numerous magazines, and tools and parts for constructing ghost guns, authorities said.

Authorities believe that Davis had been buying gun parts and accessories from several websites since 2020. His online shopping history included training tools, simulators, and concealable holsters, the DA's office said.

"Using one's child as a prop to showcase homemade, illegal weapons is inexcusable and extremely dangerous," District Attorney Alvin Bragg Jr. said in a statement. "The proliferation of ghost guns in our city cannot continue. My office is focused on addressing and rooting out ghost guns, and this is just one of several takedowns we have initiated over the past year."

Using one's child as a prop to showcase homemade, illegal weapons is inexcusable and extremely dangerous.

What Are Ghost Guns?

What actually constitutes a "ghost gun" can be debated. Primarily, a ghost gun is any firearm that lacks a serial number, making it extremely hard to trace. However, in the current parlance, a ghost gun is essentially a homemade gun.

Ghost guns used in crimes are often assembled from kits with parts purchased legally and illegally, depending on local laws, or even created using a 3D printer. 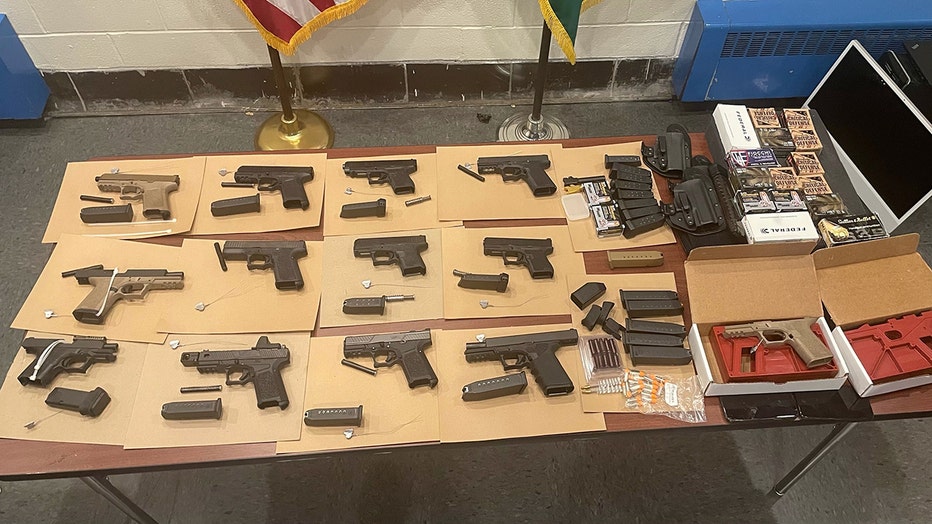 Authorities seized more than a dozen so-called ghost guns from an apartment in Manhattan. (New York County District Attorney's Office Photo) (More than a dozen semiautomatic pistols and accessories displayed on a table)

Modernizing the Definition of a Firearm

Indeed, in response to the alarming proliferation of ghost guns, the U.S. Department of Justice in April 2022 proposed a new rule to update its definitions of firearms.

"[T]his rule will clarify that parts kits that are readily convertible to firearms are subject to the same regulations as traditional firearms," DOJ said in a statement. "These regulatory updates will help curb the proliferation of 'ghost guns,' which are often assembled from kits, do not contain serial numbers, and are sold without background checks, making them difficult to trace and easy to acquire by criminals." 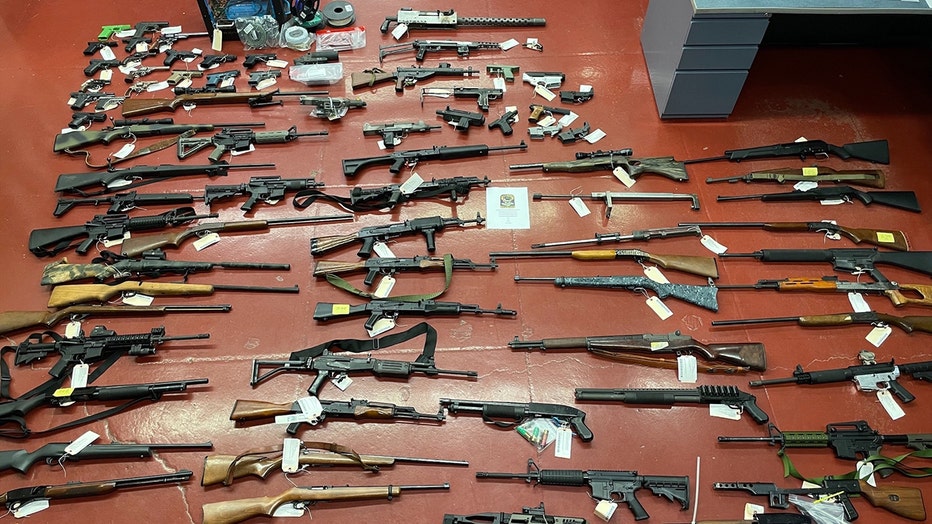 Authorities seized more than 100 firearms, hundreds of high-capacity magazines, tens of thousands of rounds of ammunition, three homemade explosive devices, and a 3D printer from a home and vehicles in New Britain, Connecticut. (Connecticut State Pol

Ghost guns are a growing problem in New York and all across the country. In 2019, the NYPD recovered 47 ghost guns during investigations. In 2020, the haul was 150 ghost guns. In 2021, the department seized 375 ghost guns.

"Stopping the proliferation of ghost guns is integral to the NYPD’s comprehensive strategy to keep these illegal weapons from harming our communities," Police Commissioner Keechant Sewell said in a statement. "These untraceable weapons shoot real bullets, hurt real New Yorkers, and cause real harm — and our fight against them will continue with vigor."

Since the Manhattan DA, NYPD, and other law enforcement agencies established the Ghost Guns Initiative in 2020, the program has prosecuted cases involving the seizure of more than 80 ghost gun parts, 42 fully assembled ghost guns, 24 serialized firearms, 421 high-capacity magazines, 45 silencers, and other gear including scopes and rapid-fire modification devices, authorities said.