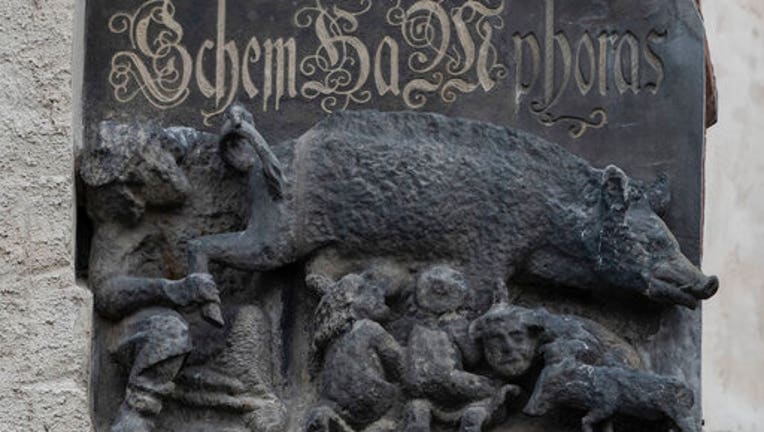 In this Tuesday, Jan. 14, 2020 photo the so-called “Judensau,” or “Jew pig,” sculpture is displayed on the facade of the Stadtkirche (Town Church) in Wittenberg, Germany. A court in eastern Germany will consider next week a Jewish man’s bid to force

NAUMBURG, Germany (AP) — A court in eastern Germany indicated Tuesday that it will likely reject a Jewish man’s bid to force the removal of an ugly remnant of centuries of anti-Semitism from a church where Martin Luther once preached.

The Naumburg court's senate said, at a hearing, that “it will maybe reject the appeal,” court spokesman Henning Haberland told reporters.

“The senate could not follow the plaintiff's opinion that the defamatory sculpture can be seen as an expression of disregard in its current presentation,” Haberland said.

The verdict will be announced on February 4.

The so-called “Judensau,” or “Jew pig,” sculpture on the Town Church in Wittenberg dates back to around 1300. It is perhaps the best-known of more than 20 such anti-Semitic relics from the Middle Ages that still adorn churches across Germany and elsewhere in Europe.

Located 4 meters (13 feet) above the ground on a corner of the church, it depicts Jews suckling on the teats of a sow, while a rabbi lifts the animal’s tail. In 1570, after the Protestant Reformation, an inscription referring to an anti-Jewish tract by Luther was added.

Judaism considers pigs impure and no one disputes that the sculpture is deliberately offensive. But there is strong disagreement about what to do with the relief.

Tuesday's hearing was the second round in the legal dispute, which comes at a time of mounting concern about anti-Semitism in Germany. In May, a court ruled against plaintiff Michael Duellmann, who wants the relief to be taken off the church and put in the nearby Luther House museum.

Judges in Dessau rejected arguments that he has a right to have the sculpture removed because it formally constitutes slander and the parish is legally responsible.

The relief “is a terrible falsification of Judaism ... a defamation of and insult to the Jewish people,” Duellmann says, arguing that it has “a terrible effect up to this day.”

When the church was renovated in the early 1980s, the parish decided to leave the sandstone sculpture in place, and it was also restored. In 1988, a memorial was built on the ground underneath it, referring to the persecution of Jews and the killing of 6 million in the Nazi Holocaust.

Pastor Johannes Block from the Town Church says the church also considers the sculpture unacceptably insulting. However, he argues it “no longer speaks for itself as a solitary piece, but is embedded in a culture of remembrance” thanks to the memorial.

“We don’t want to hide or abolish history, but take the path of reconciliation with and through history,” he says.

In Berlin, the federal commissioner for Jewish life in Germany told reporters he favored putting the relief down into a museum.

“This would be a good contribution by the church to overcome anti-Semitism,” Felix Klein told reporters ahead of the court hearing.