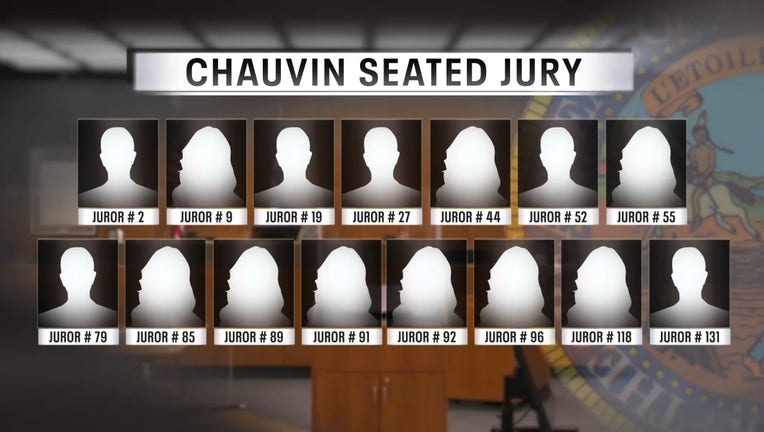 Fifteen jurors have been seated in the Derek Chauvin trial, although only 14 (12 jurors and two alternates) will hear the case.

MINNEAPOLIS (FOX 9) - A full jury has been seated in the trial of Derek Chauvin, the former Minneapolis police officer charged in the death of George Floyd.

The 15th and final juror was seated on Tuesday. Three weeks were set aside for jury selection, but it only took 11 days to seat the jury.

All 15 jurors have been selected for the trial of Derek Chauvin, the former Minneapolis police officer that is charged in the death of George Floyd.

Hennepin County Judge Peter Cahill initially said he wanted to seat 14 jurors, but at the end of the day Friday, he indicated he wanted 15 jurors in case they lose one before opening statements begin on Monday.

Fourteen jurors--12 jurors and two alternates--will actually hear the case. The 15th juror will be dismissed on Monday unless one of the other selected jurors drops out.

With the world watching a live video feed of the proceedings on the 18th floor of the Hennepin County Government Center, selecting a jury to decide the fate of former Minneapolis Police officer Derek Chauvin might seem like tedious minutia setting the stage for the courtroom drama to come.

Cahill instructed the selected jurors not to do any reading or research about the case. The jurors will return to the courthouse at 9 a.m. Monday.

The trial is being streamed live, gavel to gavel, at fox9.com/live. Starting Monday, it will be broadcast in full on FOX 9, including a quick recap of the day when court adjourns, followed by the FOX 9 News at 5. The trial is expected to last two to four weeks.

Who are the selected jurors?