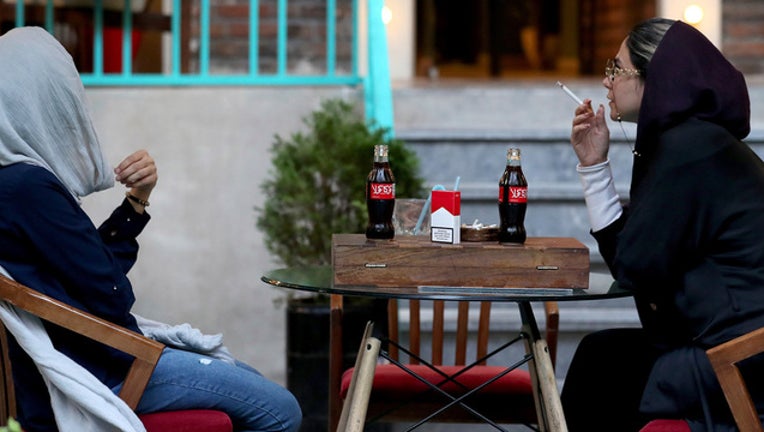 TEHRAN, Iran (AP) — At a trendy restaurant in Iran's capital, customers sip Coca-Cola through bending straws as waiters bring caddies to their tables full of Heinz ketchup and two types of Tabasco sauce.

Welcome to dining in the Islamic Republic, brought to you by America.

Whether at upscale restaurants or corner stores, American brands like Coca-Cola and Pepsi can be seen throughout Iran despite the heightened tensions between the two countries.

U.S. sanctions have taken a heavy toll on oil and other major industries in the country of 80 million people, but Western food, movies, music and clothing are still widely available. And 40 years after the Islamic Revolution and the takeover of the U.S. Embassy, despite billboards and rallies declaring "Death to America," Iranians — particularly the young — embrace U.S. products.

"The American lifestyle is very attractive," said Ahmad Rezaee, a 21-year-old student at Tehran University who drained two bottles of Coke while out with a friend. Coca-Cola "portrays that lifestyle for us."

Tensions have soared following the Trump administration's decision last year to withdraw from Iran's 2015 nuclear agreement with world powers and restore sanctions. In recent weeks Iran has begun openly breaching limits set by the accord, saying it cannot abide by the deal unless other signatories provide economic relief.

Despite that, drinking a "Coca" or a Pepsi after eating kebab in Iran comes as second nature, though the soft drinks don't taste quite as syrupy or sweet as their American counterparts. Both brands are bottled by local firms, Khoshgovar Mashhad Co. for Coca-Cola and Sasan Co. and Neysun Shargh Co. for Pepsi, which are affiliated with the Imam Reza Foundation, an economic conglomerate tied to the country's Shiite theocracy.

Coca-Cola held a 28% market share in Iran, according to a 2016 report by research firm Euromonitor International, while Pepsi had around 20%.

Asked about Coca-Cola sales in Iran, the Atlanta-based company said it had sold concentrate to Iran for over 20 years in line with U.S. sanctions policies.

Pepsi did not respond to requests for comment. Pittsburgh-based Kraft Heinz Co. said that "like many Western companies, a few of our products are made available via a local Iranian distributor." The McIlhenny Co. of Avery Island, Louisiana, the maker of Tabasco, said it "expressly prohibits its distributors from reselling Tabasco brand products in Iran."

"Unfortunately, as is the case with all manufacturers, McIlhenny Co. has only a limited ability to stop illegal third-party distribution networks from secretly diverting our products to Iran and often must rely on U.S. agencies and law enforcement to identify front companies and individuals engaged in sanctions evasion," CEO Harold Osborn told The Associated Press in a statement.

At V Café near Tehran University, diners drank Coca-Colas and lathered their food with American condiments as videos played on a giant screen of travel destinations from around the world. Rezaee and a friend, Sima Najafzadeh, a 21-year-old fellow student, each drank Cokes, saying they enjoyed the taste. They also would like to see more iPhones, McDonald's restaurants and other trappings of Americana.

That goes for American films as well. Rezaee acknowledged having to find a pirated copy of "Avengers: Endgame" online as it never played in Iran. Others without a strong internet connection can find recently released films like "John Wick: Chapter 3 — Parabellum" for under 40 cents apiece on Tehran's busy Enghelab Street, where hawkers also sell portraits of a young Al Pacino. Western pop and rock music seeps out of the occasional passing car.

At the city's Grand Bazaar, the capital's beating heart, a beach towel showing Mickey Mouse with a surf board in "So Cal" — southern California — hung on one rafter. Stacks of blue jeans were also on offer, but American brands like Levi Strauss have largely disappeared in recent months as Iran's currency has plummeted.

That's been a boon for the Par Group, a local jean manufacturer that produces some 3 million square meters of jeans a month from locally sourced and foreign material. Sales associates at their shop in the bazaar acknowledged the product's roots in American cowboy culture but said jeans remain popular on the streets of Tehran.

"All over the world, people want jeans," said Amin Moradi, a salesman at the shop. "Iranians are very fashionable."

At Tehran's massive Iran Mall, a store called TOMSon sells what appears to be the eponymous slip-on Toms shoes. The firm did not respond to requests for comment.

Of all the American imports, the most unlikely might be the Tehran Research Reactor, a nuclear gift from America that arrived in 1967 as part of its "Atoms for Peace" program, and which still runs today.